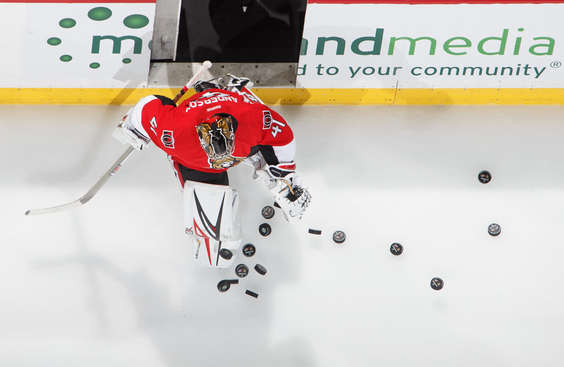 NHL.com Recap
OTTAWA — Kyle Turris scored late in the third period, and Craig Anderson made 32 saves to help the Ottawa Senators to a 2-1 win against the Carolina Hurricanes at Canadian Tire Centre on Saturday.

It was Ottawa’s third win in a row.

Turris cut around Hurricanes defenseman Jaccob Slavin and beat goaltender Cam Ward with a wrist shot with 3:32 remaining to put the Senators ahead 2-1. The goal was upheld by video review after Carolina coach Bill Peters challenged it, claiming Ottawa was offside.

Sebastian Aho scored for the Hurricanes (8-8-4), who have lost back-to-back games after winning five straight. Ward made 22 saves.

“I really like our mindset,” Senators coach Guy Boucher said. “It’s a playoff mindset of we’re not giving the game away, we’re not beating ourselves, and guys are really getting good at that.”

It was Ottawa’s ninth victory in a one-goal game, tied with the Chicago Blackhawks for the NHL lead.

“You don’t want to get in the habit of playing from behind, but we’re showing good mental toughness by not letting a goal affect the way we play,” Anderson said. “We’re not altering the way we play trying to chase that goal. We’re sticking with it and being patient knowing that hopefully one is all they’re going to get, but we have the ability to score and not chase it.”

Phaneuf tied the game 1-1 at 6:15 of the second period with his second goal of the season. It came after the Hurricanes had spent the better part of two shifts in the Senators zone.

Aho gave Carolina a 1-0 lead when he scored at 11:24 of the first period. Anderson made a save on Aho’s shot from a sharp angle, but the rebound went in off Ottawa forward Tom Pyatt, who was checking Jordan Staal’s drive to the net.

Senators defenseman Erik Karlsson started the play on the winning goal, getting back to the puck in the left corner of the Ottawa zone. He passed ahead to Turris, who worked a give-and-go with Bobby Ryan along the right wing in the neutral zone, setting up Turris to split the defense and beat Ward for his 10th goal, third game-winner.

Senators forward Zack Smith took a pass from Mark Stone late in the first period, broke in alone, and got Ward to go down with a fake to his left. Ward, on his stomach, got his right pad on the shot with 1:04 left.

With the game tied 1-1 and about 8:50 left in the third period, Hurricanes forwards Jay McClement and Joakim Nordstrom broke into the Senators zone to chase down a puck chipped toward the net. Ottawa defenseman Mark Borowiecki read the play perfectly and got his body in front of McClement to prevent Carolina from getting a shot on the play.

“I don’t know how many games it is that we’ve given up the first goal, and it makes absolutely no difference to us.” — Senators coach Guy Boucher after they gave up the first goal for the 11th straight game and 16th time in 21 games this season

“It is frustrating. Any time you give up a late goal, a game-winning goal, it is frustrating. It’s important we park it here when we fly back to Raleigh and get ready for Florida. We have less than 24 hours to go back out there and continue to do what we’ve been doing. We’ve been playing strong. Tonight was no different. We just weren’t able to find the back of the net.” — Hurricanes goaltender Cam Ward

“Outstanding. It’s perfect. Should be in the wrapper by 4 a.m. Get a little nap in. Have a pregame meal and play again. It’s great. That’s what they love to do. They’d rather play than practice, I know that.” — Hurricanes coach Bill Peters on playing the Florida Panthers on Sunday

“It was pretty tight. It didn’t look like much going on. Both teams did a good of keeping the mistakes to a minimum and not giving much. They made a great play on the goal to get up quick, and that was the end.” — Hurricanes forward Jordan Staal

Karlsson played his 500th NHL game. … Senators forward Ryan Dzingel played after getting 35 stitches to close cuts to his left ear after he was hit by a deflected puck Thursday in a 3-1 win against the Boston Bruins. … Peters scratched forward Brock McGinn and replaced him in the lineup with forward Andrej Nestrasil, who had been a healthy scratch for six games. … It was the second time in November the Senators defeated the Hurricanes 2-1. Phaneuf and Turris scored the Ottawa goals in each game.