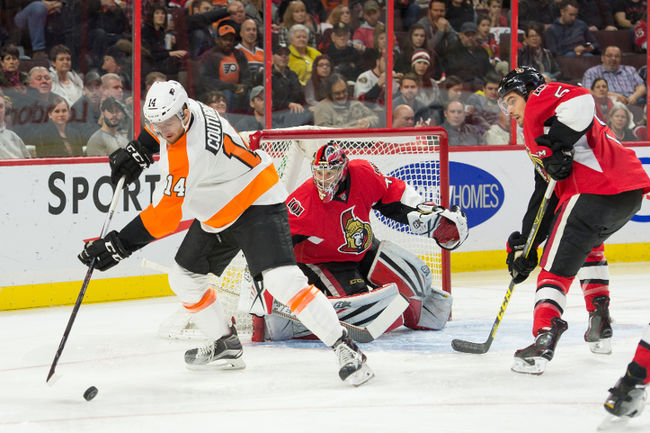 OTTAWA — Craig Anderson made 36 saves for his second shutout in a row to help the Ottawa Senators to a 4-0 win against the Philadelphia Flyers at Canadian Tire Centre on Saturday.

It was Anderson’s second shutout of the season and the 31st of his NHL career.

“We played hard-to-play-against hockey for another 60 minutes tonight,” said Anderson, who made 25 saves in a 3-0 win against the Columbus Blue Jackets on Thursday. “From start to finish, we made it really hard on the other team. We really made them frustrated, and it showed, and we were able to capitalize on our chances.”

Bobby Ryan, who was in the lineup after leaving the Columbus game late in the third period after a hard hit into the boards, had two assists to extend his career-best point streak to eight games (three goals, seven assists).

Steve Mason made 27 saves for Philadelphia (6-9-5), which has lost three in a row. Last in the NHL in goals per game (1.70), the Flyers were shut out for the second straight game and third time in their past six. They haven’t scored a goal in 132:34.

Coach Dave Cameron has been pushing the Senators to be more physical on the puck-carrier, and they have been more consistent doing that the past few games.

“Physicality gives you emotion and backs the other team up a little bit,” Cameron said. “When you go through pucks, at least it causes a stop or a pause in the play, and it’s harder for teams to attack. We’ve been better at that. We’ll get better too.”

The Senators went 3-0-2 on their five-game homestand to improve to 5-3-4 at Canadian Tire Centre this season.

“I think our last five games at home have been excellent,” Anderson said. “We’re continuing to get points at home, which shows we’re playing the right way. Guys are paying the price. I think we had [29] blocked shots tonight, so that’s definitely showing we’re paying the price to win games.”

The blocked shots helped continue to the Flyers’ struggle to score goals. They had some chances during a couple of early power plays, but Anderson turned them back.

Zibanejad scored his first goal in 12 games when he tipped a shot by defenseman Cody Ceci past Mason with 44 seconds left in the first period after the Senators won a faceoff in the Flyers zone.

The Flyers gave up a 2-on-1 goal at 1:22 of the second period when Ryan tipped the puck by Flyers defenseman Michael Del Zotto and set up Hoffman for his sixth of the season.

“It was very competitive all the way through that first period,” Flyers coach Dave Hakstol said. “To give up that first goal put us back on our heels.”

Philadelphia captain Claude Giroux said the Flyers are allowing the score to dictate the way they are playing.

“We had a good start,” he said. “I think we played the way we wanted to. Again, they scored the first goal and we kind of changed the way we were playing. We need to learn from this. We need to keep playing 60 minutes the same way. When we start doing that, we’re going to be successful a little bit more.”

Michalek made a good play to poke the puck by Flyers defenseman Luke Schenn and earned some room to skate in on Mason. His fourth goal made it 3-0 at 17:25 of the second period.

Turris scored his 10th goal at 1:36 of the third period just as a penalty to Flyers defenseman Radko Gudas expired.

“First shot, the goalie sees it, he’s going to stop it. You don’t take his eyes away, it’s not going to go in the back of the net.”

Hakstol said he wouldn’t consider any drastic line changes or major adjustments to try to spark the Flyers offense.