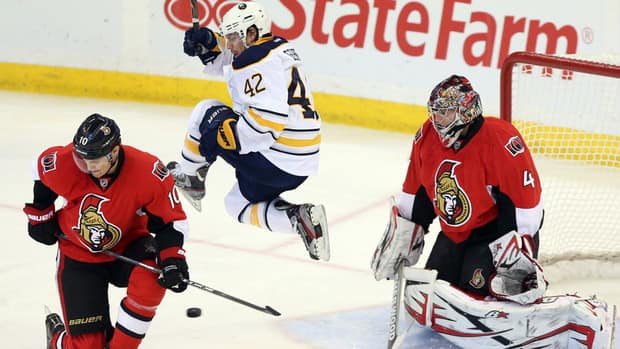 The first short-handed goal of Erik Karlsson’s career came at a great time for the Ottawa Senators.

The smooth-skating defenceman opened the scoring in the second period, Erik Condra doubled the lead less than two minutes later and Craig Anderson did the rest by making 42 saves Tuesday as Ottawa shut out the Buffalo Sabres 2-0.

Scoreless after the first period, the Senators had a number of great chances in the second but couldn’t beat Ryan Miller until Karlsson blasted a shot just over the Buffalo goalie’s left pad at 15:20 with his team down a man.

Karlsson, last season’s Norris Trophy winner as the league’s top defenceman, says he always looks to go on the attack while killing a penalty.

‘[I’m] just trying to give the chance to win — trying to control my rebounds as best as possible. Guys in front are doing a great job of boxing out and cleaning up any mess in front and allowing me to see the puck most of the time.’—Senators goalie Craig Anderson

“I think when you’re one man short you can even create some momentum there,” said Karlsson following his sixth goal of the season. “It’s going to be good for the team if you see an opportunity once in a while.”

Condra then doubled the Ottawa lead just 1:54 later, banging home a loose puck off a scramble in front Miller’s goal for his second of the season.

“You need one of those dirty ones to start the roll and hopefully I did that,” Condra said. “Without [injured centre Jason Spezza] everybody’s got to chip in and we’ve got to do it the dirty way for other things to open up.”

Anderson, who picked up his second shutout of the season, was especially sharp in the third period with the Sabres pressing for the tie as the Senators (7-4-2) snapped a mini two-game slide, including a 1-0 shutout loss to Winnipeg on Saturday.

“[I’m] just trying to give the chance to win — trying to control my rebounds as best as possible,” Anderson said. “Guys in front are doing a great job of boxing out and cleaning up any mess in front and allowing me to see the puck most of the time.”

“It’s tough to give up a short-handed goal,” Miller said. “I think we had two guys over backcheck and left the high guy … I want to make a save for the boys at some point there [but then] it turns into a game where they can keep everything to the outside.”

Daniel Alfredsson had a great opportunity to open the scoring for the Senators on the power play prior to the two-goal barrage in the second, but the Ottawa captain’s one-timer missed the net with Miller at his mercy.

Buffalo had a chance to get back in the game midway though the third when Ottawa’s Jim O’Brien went off for holding and Kyle Turris was whistled for high sticking to set up a two-man advantage for 14 seconds. But Anderson and the Senators penalty killers did the job against a Sabres power play that finished the night 0-for-4.

“We have confidence in [Anderson],” Condra said. “It lets us play our game and know that he’s going to be back there to save us when we don’t play so well.”

Ottawa’s Jakob Silfverberg had a chance to stretch the Senators’ lead to three on a power play later in the period, but Miller sprawled to make a diving save at the side of the Buffalo net.

“We got some traffic, got to the net and were able to get a couple past [Miller],” Anderson said. “Obviously Miller is a terrific goaltender and it was hard work tonight.

“We were able to get a couple on him and luckily our defence and our penalty kill took over the rest of the game.”