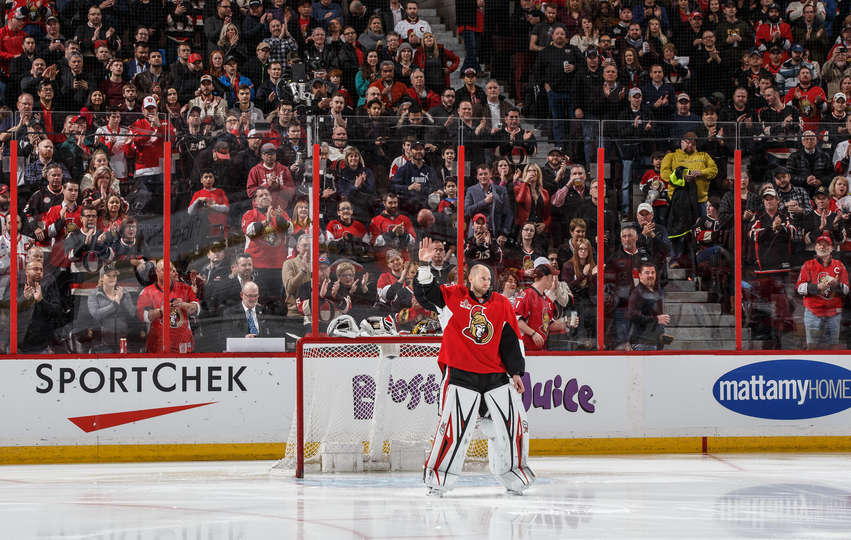 OTTAWA — The Ottawa Senators tied for second place in the Atlantic Division with a 2-0 win against the Detroit Red Wings at Canadian Tire Centre on Tuesday.

The Senators (42-27-10), who tied the Boston Bruins, ended a five-game losing streak. Ottawa, which has one game in hand, plays at Boston on Thursday.

The Bruins and the Senators are one point ahead of the Toronto Maple Leafs, who have three games remaining and hold the second wild card into the Stanley Cup Playoffs from the Eastern Conference.

Erik Karlsson and Tom Pyatt scored for the Senators, and Craig Anderson made 24 saves for his fifth shutout of the season.

“It was a good win for us,” Anderson said. “We were due. We were starting to play some good hockey and we weren’t getting rewarded for it. I think tonight everything kind of turned for us a little bit, but it started a couple of games ago.”

“I wasn’t sure I was going to get back,” the 31-year-old said. “It’s great to get back with the guys. Obviously it’s a big win, so it’s nice. I wanted to play … the hurdles to get over everything … very thankful for the organization to give me a chance to get back.”

Karlsson gave the Senators a 1-0 lead at 12:59 of the first period with his 17th goal of the season.

Pyatt scored 7:49 into the second period to give the Senators a 2-0 lead. He took a puck tipped to him in the left wing circle by Jean-Gabriel Pageau. Pyatt’s shot appeared to changed direction after hitting the stick of Red Wings defenseman Danny DeKeyser.

Karlsson, who missed the past two games with an upper-body injury, left the game halfway through the third period before returning to the bench. He did not play another shift.

“Nothing really,” Karlsson said. “I’m watching guys like [Fredrik] Claesson and [Ben] Harpur especially, and they played really well yesterday and even better today. The guys did a great job in controlling the game and we felt it wasn’t really necessary to use me at the end, unless we really needed to, and it never got to that point. Just took some ice time off and rested up.”

“It was two teams that didn’t really have much going,” Detroit captain Henrik Zetterberg said. “They scored two, we didn’t score any. Overall there was not much going on. It’s a tough team to play against. They clog up the neutral zone with five guys, and if you’re not crisp with your passes or making sure the puck goes deep, they are turning the play really fast. Once they get in our end, they’re good.”

Karlsson managed to shoot the puck inside the far post on Howard from deep on the right wing from a tough angle, almost on the goal line.

At 6:00 of the third period with the Senators up 2-0, Anderson stopped a point-blank shot by Niklas Kronwall from the slot.

With Karlsson on the bench for the final 10 minutes, Harpur, a rookie playing in his third game of the season and eighth in the NHL, played 19:17, had one blocked shot and was plus-1.

“You’ve got a lot to play for. You play for the winged wheel on your chest. That’s what we do. We’ve got two games left here now. It’s going to be an exciting weekend for us. [The Montreal Canadiens] first on Saturday and then the last game at The Joe.” — Detroit captain Henrik Zetterberg on what motivates the Red Wings, who will miss the Stanley Cup Playoffs for the first time in 26 seasons

“Both of those (goals) can’t go in.” — Red Wings goaltender Jimmy Howard on his performance