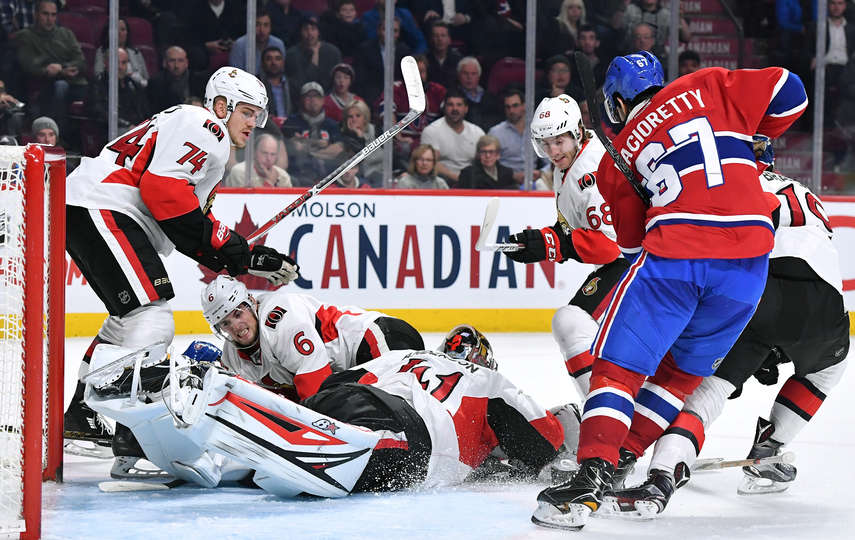 Montreal Gazette Coverage
MONTREAL — Mike Hoffman and Mark Stone each had a goal and two assists to help the Ottawa Senators to a 4-3 win against the Montreal Canadiens at Bell Centre on Tuesday.

It was the first regulation loss of the season for Montreal goalie Carey Price (11-1-1), who made 19 saves.

Derek Brassard and Erik Karlsson scored for the Senators (11-7-1), and Craig Anderson made 36 saves.

After Galchenyuk scored the Canadiens’ second power-play goal of the game at 2:08 of the third period to give Montreal a 3-2 lead, Stone and Karlsson scored 2:24 apart to give the Senators their first lead of the game.

Weber scored his Canadiens-leading seventh power-play goal to put Montreal ahead 1-0 26 seconds into the second period.

Weber’s goal ended Ottawa’s streak of 35 successful penalty kills in a row since Oct. 22 (4-2 loss against the Tampa Bay Lightning). It also was the 14th time in 19 games this season the Senators have given up the first goal.

Karlsson had the 400th point of his NHL career in his 498th game when he assisted on Hoffman’s power-play goal at 5:22 of the second period to tie the game 1-1.

Canadiens defenseman Nathan Beaulieu left the game at 15:19 of the second period after getting hit in the throat area with the puck.