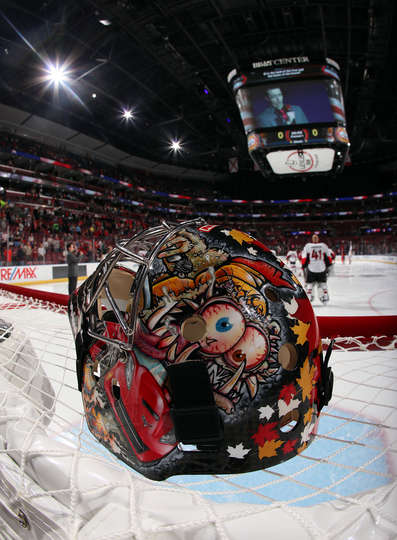 The former Florida Panthers goalie continued his dominance against his old team, stopping 30 shots to lead the Senators to a 1-0 victory.

Anderson improved to 11-2-1 against the Panthers, for whom he played three seasons (2006-09). It was Anderson’s third shutout against Florida and the 27th of his career. He entered the game with a 2.06 goals-against average and .934 save percentage against Florida.

“It feels like home,” Anderson said. “I know the building, I know the area, what to expect. And when you know your surroundings, it’s a lot easier to just go in there and play and not really think about it. It’s just one of those things where the team I’ve played on is matched up pretty well and I’ve been able to come out and the guys have battled for me to get that win because they know it’s kind of a big deal when a player plays against a team that he played for.”

Anderson’s performance validated coach Paul MacLean’s decision start him instead of Robin Lehner, who earned consideration after stopping 38 of 40 shots in a 3-2 shootout victory against the Tampa Bay Lightning on Saturday.

MacLean named Anderson his starter after the morning skate. MacLean said Anderson’s track record against Florida played a factor in choosing to go with him.

“Well, it certainly is always in the equation when we evaluate who the goaltender is going to be, but also at the same time Craig is our No. 1 goaltender and it’s the third game of the year,” MacLean said. “We know how he can play, but it does become a factor. It makes it easier when the record is like that.”

Clarke MacArthur gave Anderson and the Senators the only goal they would need when he scored on the power play at 15:34 of the second period.

With the win, the Senators concluded their road trip with a 2-1-0 record heading into their home opener Thursday against the Colorado Avalanche.

“Yeah, it’s good,” MacArthur said. “It’s what we had in mind. If you can get two out of three all the time, we’ll be in good shape. Not the prettiest hockey, but early on here we’ll take the wins and move forward.”

Florida, which was coming off the most lopsided home-opening loss at BB&T Center, is still looking for its first victory of the season (0-2-1). The Panthers have lost three straight games to start a season for the first time since 2007-08.

The Panthers, who tied for second-fewest goals in the NHL last season, have scored three goals in their first three games.

“You’re not going to win not scoring any goals, obviously,” Florida center Nick Bjugstad said. “We just have to bear down in front and get the dirty goals, not try to be too pretty. Sometimes we overpass when we should continue to shoot the puck.”

Coach Gerard Gallant said he was pleased with the effort, which followed a 5-1 loss against the New Jersey Devils on Saturday.

“We played a good, hard game, lots of good scoring opportunities, but a 1-0 game is a tough game to lose,” Gallant said. “I thought we played real well. When the goalie plays well and you’ve got no luck, things don’t go in the net. You keep putting pucks to the net and you keep grinding it out.”

Roberto Luongo, who was pulled after allowing five goals on 14 shots in the loss against New Jersey, made 22 saves for the Panthers. The loss snapped Luongo’s 10-game winning streak against Ottawa, dating back to a 6-3 loss Dec. 5, 2005 during the last season of his first stint with the Panthers.

Before MacArthur scored, it was the Panthers who had the better scoring chances. Midway through the second period, Bjugstad hit the post with a wrist shot on a 2-on-1.

Bjugstad was in the penalty box for hooking when MacArthur took a pass from Kyle Turris inside the Florida zone, slid between Scottie Upshall and Erik Gudbranson and slipped a backhand between Luongo’s legs after a quick deke.

“[Turris] made a great play and gave me the breakaway,” MacArthur said. “It’s a tough little pass to make and I was able to open him up and get him through. It was nice to get one.”

Turris has a point in each of Ottawa’s three games this season.

After having a 7-6 edge in shots in the first period, the Panthers outshot Ottawa 14-7 in the second, even though both of their power plays ended with penalties of their own.

Ottawa had the best scoring chances in the third period, but couldn’t add to its lead.

“We didn’t try to do anything that we were uncapable of and guys were in the right position 99 percent of the time tonight and that’s key, make them beat you by making good plays,” Anderson said. “Tonight we were solid. We played composed, we played solid, we played patient. We didn’t force plays. Our breakout passes were tape-to-tape. You can go down the list of why we had success. The key now is just to figure out those reasons and repeat.”

When the Senators did have occasional lapses, Anderson was there to make the save.

“I thought we did an exceptional job of just letting him do what he has to do and we took care of the stuff that was all around him,” MacLean said. “He was very efficient. We gave him a couple of tests, but he was up to them. We only gave him a couple. I felt that Craig gave our team a lot of confidence.”