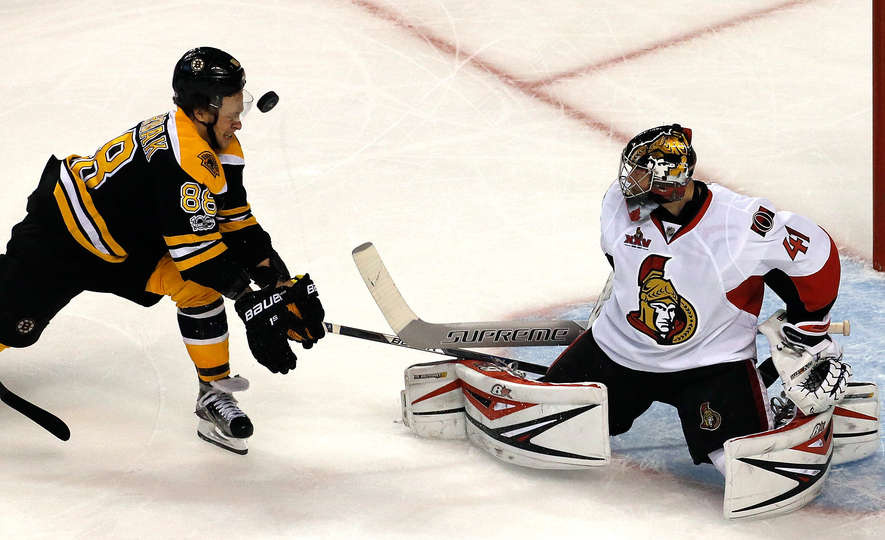 BOSTON — Bobby Ryan scored a power-play goal 5:43 into overtime to give the Ottawa Senators a 4-3 win against the Boston Bruins in Game 3 of the Eastern Conference First Round at TD Garden on Monday.

The Senators lead the best-of-7 series 2-1 with Game 4 here Wednesday.

Ryan scored off a pass from Kyle Turris 1:05 after Boston forward Riley Nash was called for roughing Ryan.

Mike Hoffman scored twice, Derick Brassard had a goal and an assist, and Craig Anderson made 17 saves for the Senators, who led 3-0 early in the second period.

Ryan felt a measure of redemption after scoring because it was his miscue that led to a goal by David Backes, Boston’s second of the game, in the second period. John-Michael Liles’ chip out of the Boston end bounced over Ryan’s stick at the Ottawa blue line, and Backes took the puck to the net and scored.

“[I feel] great especially because I owed one after the gaffe in the second period,” Ryan said. “I knew if I stuck with it I’d get a chance eventually, and the guys around me made good plays to get me the puck. It feels incredible.”

Noel Acciari and David Pastrnak each scored his first career Stanley Cup Playoff goal, and Tuukka Rask made 28 saves for the Bruins, who played without four of their regular defensemen because of injury.

“It was definitely a terrible start on our part,” Boston center Patrice Bergeron said. “That can’t happen this time of year. They took advantage of us not getting the first period we wanted, and we were playing catch-up hockey and definitely did a great job getting back in the game.”

Hoffman scored on a breakaway 7:15 into the game to give the Senators a 1-0 lead.

Ottawa went ahead 2-0 when Brassard scored from the top of the crease on the rebound of a Ryan shot at 7:40.

Hoffman scored his second goal on a power play at 3:42 of the second period to put the Senators up 3-0, but the Bruins scored two quick goals to get back in it.

Boston center David Krejci made his 2017 playoff debut after sitting the first two games with an upper-body injury. He had one shot on goal, one hit and a minus-1 rating in 14:38.

Defenseman Tommy Cross, 27, made his NHL playoff debut after McQuaid was injured in Game 2. He had an assist, two blocked shots and a plus-1 rating in 13:08.

Krug and Carlo have not played in the series. Miller was injured in Game 1.

After taking a pass from defenseman Erik Karlsson from the Ottawa goal line at the Boston blue line, Hoffman went in alone on Rask and showed backhand before dragging the puck to his right with one hand on his stick and tucking it behind Rask to open the scoring.

Backes passed the puck from the right side of the net to David Krejci cutting backdoor, but Anderson made a right-pad save at 10:26 of the third period.

Karlsson made a pass from the Ottawa blue line that hit Ryan in stride at the Boston blue line. Ryan drove to the net, made a backhand pass to Turris, and redirected the return feed past Rask to win it.

“I think it’s pretty selfish. You can’t make that play, you can’t put the refs in that position. Regardless of what happened before it, you can’t do it.” — Bruins forward Riley Nash on his roughing penalty 4:38 into overtime

“It’s a mental battle with yourself. That’s all that is. Making sure you’re giving the guys an opportunity. … I think it’s one of those things where if you dwell on what’s happened in the past, you can’t be very good in the present.” — Senators goaltender Craig Anderson of refocusing after the Bruins tied the game 3-3 with three straight goals

“I haven’t had a good practice in a really long time, but I knew that. I kept things simple in the first period and … in the second period I felt much better, third period same thing. So it was all right.” — Bruins center David Krejci, who made his 2017 postseason debut after an upper-body injury kept him out the first two games of the series

Senators defenseman Mark Borowiecki missed the game with a lower-body injury sustained in Game 2. He’s day to day. Ben Harpur made his NHL playoff debut in Borowiecki’s place and was plus-1 in 17:26. … With Acciari and Cross in drawing into the lineup for Game 3, 11 Bruins have made their NHL postseason debut this series. … Boston rookie defenseman Charlie McAvoy’s assist on Pastrnak’s goal was his first NHL point.