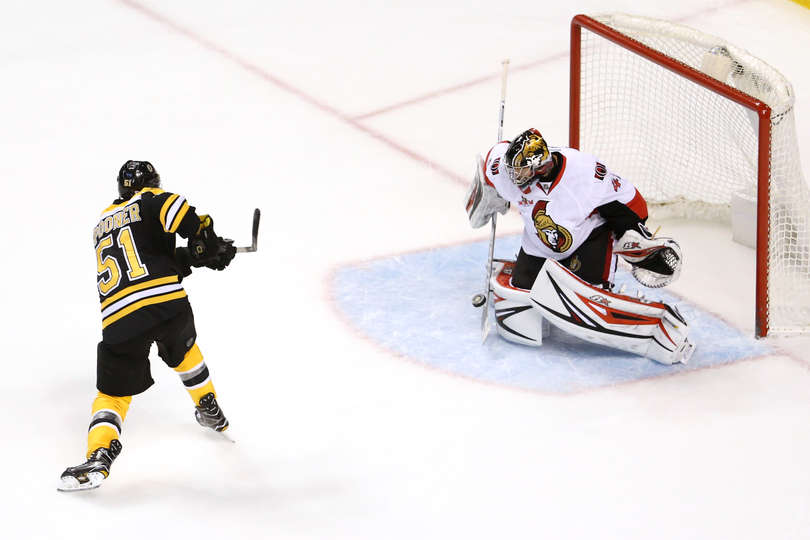 BOSTON — The Ottawa Senators clinched a Stanley Cup Playoff berth and took over second place in the Atlantic Division in a 2-1 shootout win against the Boston Bruins at TD Garden on Thursday.

The Senators (43-27-10), who needed one point to clinch, lead the third-place Bruins (44-30-7) by one point and have one game in hand. Ottawa is three points ahead of the fourth-place Toronto Maple Leafs, who lost 4-1 to the Tampa Bay Lightning.

Kyle Turris scored the only goal in the shootout.

Alexandre Burrows scored, and goaltender Craig Anderson made 28 saves for the Senators, who have won their past two games after a five-game losing streak (0-3-2).

“It’s a great moment,” Senators coach Guy Boucher said. “When you look at what these players have lived through and what the organization had to go through this year and the adversity that the players had to battle through, even today missing lots of key guys, I can’t help but be so proud and impressed by this group.”

Drew Stafford scored his second goal in as many games, and goaltender Tuukka Rask made 25 saves for the Bruins, who had won six games in a row.

The Bruins played without forward Brad Marchand, who served the first of a two-game suspension for spearing Lightning defenseman Jake Dotchin on Tuesday, and lost defenseman Torey Krug to a lower-body injury in the first period.

“They do a great job of shutting the neutral zone down,” Bruins defenseman Kevan Miller said. “I think in the first period we did a pretty good job of getting through that. Second and third, they had five guys by the puck the whole game, so tough to get through. I think we did a pretty good job, we deserved better, but it’s a tough one.”

Stafford scored on a wraparound on the power play at 10:37 of the first period to give the Bruins a 1-0 lead.

“I thought it was a big goal for sure,” said Burrows, who has six goals in 18 games since being acquired in a trade from the Vancouver Canucks on Feb. 27. “I thought we were coming better in the second period. We played better and then after that I thought we really played well, we carried the play and we limited their chances. It’s nice to get the result that we’re looking for, facing adversity lately with injuries. And now it’s nice to get in and know that we’re going to be playing next week.”

Anderson got his right pad on David Pastrnak’s backhand shot on a breakaway at 11:24 of the second period to keep the game tied 1-1.

Turris beat Rask through the five-hole to improve to 4-for-10 in the shootout this season. It was his second deciding goal.

Stalberg screened Rask on Burrows’ goal. He also blocked Boston forward Riley Nash’s shot with his stick at 2:01 of overtime to prevent a dangerous scoring opportunity. Stalberg was shaken up on a hit by McQuaid at 11:21 of the third period, and he needed help getting off the ice.

“Our therapists, they made a miracle with [defenseman Cody] Ceci. There’s no way yesterday I thought Ceci was playing. And they just worked so hard, and Ceci worked so hard three, four, five times a day just to accelerate the process. I never thought he’d be playing until maybe this weekend or maybe the playoffs.” — Senators coach Guy Boucher on Ceci’s return after missing two games with a lower-body injury

“I saw he shot it, it was one of those you try to take the net away and — skinny pants got me again. Blame the pants.” — Bruins goaltender Tuukka Rask on Kyle Turris’ shootout goal

It was reported by NBCSN that Krug left the arena on crutches. … The Senators swept the season series from the Bruins for the first time, outscoring them 11-6 in the four games. … Bruins forward David Backes played his 800th NHL game.