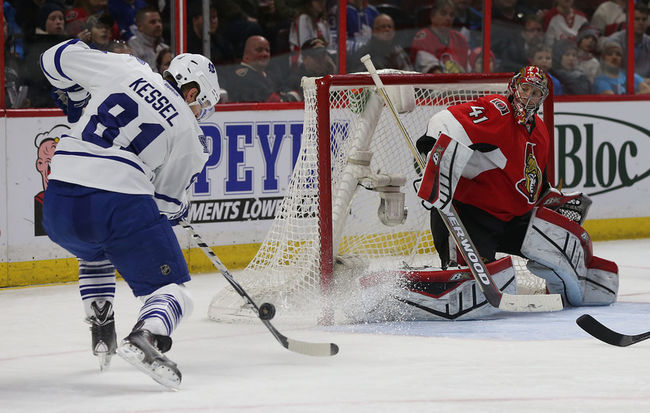 OTTAWA – Captain Erik Karlsson scored two goals and Mike Hoffman had a goal and an assist to help the Ottawa Senators to a 4-3 win against the Toronto Maple Leafs at Canadian Tire Centre on Wednesday, extending the Maple Leafs’ losing streak to six games.

The Senators (19-18-9) took advantage of some sloppy defensive play by the Maple Leafs in the first period to build a 3-0 lead on goals by Hoffman, Karlsson and Mika Zibanejad.

The Maple Leafs (22-23-3), who scored two goals in their past five games, got a rare offensive spark with David Clarkson scoring his first goal in 15 games and Nazem Kadri adding a power-play goal early in the third period that cut the lead to 3-2.

After Karlsson’s goal at 15:20 of the third gave the Senators a 4-2 lead, Maple Leafs forward James van Riemsdyk scored off a rebound with 1:23 remaining.

It again was a poor start that doomed the Maple Leafs to another loss, their seventh in eight games since coach Peter Horachek replaced Randy Carlyle on Jan. 7.

“I scratch my head when I talk about that first period. That was totally by ourselves, to ourselves, by a team that played last night,” Horachek said. “We wanted to play more like we did in the second and third period. It’s a strange situation. We have to correct that for sure.”

Horachek’s message to his players heading into the All-Star break, which ends Jan. 26, was this:

“The first periods are unacceptable. If we are going to become a better team, we have to learn to play 60-minute hockey and to play a whole game. We can’t play like this and expect we’re going to be getting better and moving up the ladder.

“You have to look yourself in the mirror and decide this is the way we want to be. If we want to be a better team we have to start working from the beginning of the game to the end of the game and make it hard to play against [us].”

Clarkson scored the only goal of the second period to make it 3-1 and was screening Senators goaltender Craig Anderson when Kadri scored on the power play at 2:36 of the third.

“When the game was on the line in third, we didn’t give them much,” Karlsson said. “Even though we didn’t create a lot either, we kept it tight and, again, we deserved to win the game today.”

It looked like the Maple Leafs might get the start they were looking for when All-Star forward Phil Kessel broke in alone on Anderson early in the first period. But Kessel, who hasn’t scored in six games, shot wide.

“We’re getting chances and they’re just not going in. Phil is a great scorer and he usually buries that 80 percent of the time and it’s just not going in for him now,” Maple Leafs defenseman Jake Gardiner said. “If our whole team starts getting some bounces, it will start going our way.”

On the next rush up the ice, Hoffman scored when his wrist shot got through a screen by Maple Leafs defenseman Roman Polak and past Reimer high to his glove side at 2:02.

The goal was Hoffman’s 16th of the season to lead NHL rookies.

Hoffman and Karlsson then worked a beautiful give-and-go off a 3-on-1 to put Ottawa ahead 2-0. Toronto defenseman Cody Franson pinched on Ryan, but Ryan got the puck out, setting up the 3-on-1. Karlsson passed across the slot to Hoffman, who quickly returned the pass, leaving Karlsson for the open side of the net to Reimer’s right for his 10th goal.

It was a good display of Hoffman’s quick feet and soft hands. He will represent the Senators at the 2015 Honda NHL All-Star Skills Competition in Columbus.

“Last two games here we came out with three of four points which is decent,” Hoffman said. “We came out and had a strong effort and it’s definitely a good feeling going into the break with a [win].”

The Senators lost 3-2 in overtime to the New York Rangers on Tuesday.

“It was definitely a big [win]. Any time we play Toronto there’s a lot of emotions going around,” Hoffman said. “It’s a special one going into the break and [we] get a few days off. Everyone is feeling good.”

Zibanejad took advantage of another odd-man situation to score his 11th goal off a pass from Ryan with 20 seconds left in the first period.

The Maple Leafs play the New Jersey Devils at Prudential Center on Jan. 28. The Senators will face the Dallas Stars and former captain Jason Spezza at Canadian Tire Centre on Jan. 29.