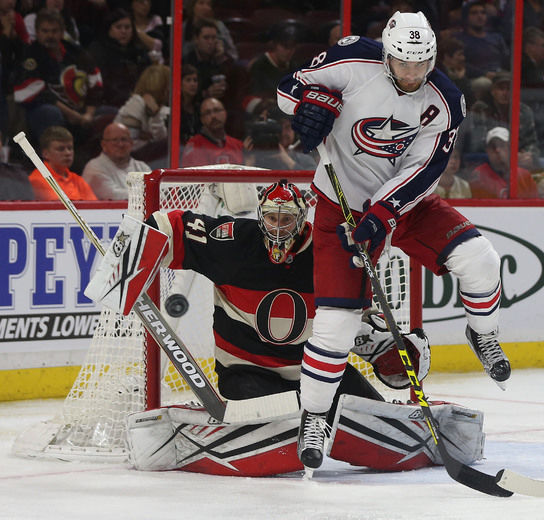 OTTAWA — Erik Karlsson scored two goals to help the Ottawa Senators to a 3-0 victory against the Columbus Blue Jackets at Canadian Tire Centre on Thursday.

Senators goaltender Craig Anderson made 25 saves for the Senators (9-5-5) for his first shutout of the season and the 30th of his NHL career. Kyle Turris scored into an empty net with 42 seconds left for his ninth goal.

Karlsson’s goals came 1:51 apart near the end of the second period.

“Over the course of 60 minutes, I think we were the better team, even though Columbus played well and made it hard on us,” said Karlsson, who has five goals and three assists in the past five games. “We did what we had to do to win the game. We got a few lucky bounces, and that’s what you need sometimes. I think everybody contributed, and it started with the third and fourth line. They did the hard work. They got us going.”

Curtis McElhinney made 26 saves for the Blue Jackets (7-13-0), whose winning streak ended at three.

It was a physical game; each team had 34 hits. The Senators’ fourth line of Zack Smith between Curtis Lazar and Chris Neil combined for 13 hits.

“The fourth line … after a couple of our D got banged up, they took it upon themselves to give an emotional lift with some physicality, and we responded,” Senators coach Dave Cameron said.

Ottawa defenseman Patrick Wiercioch left the game after colliding with Columbus forward Nick Foligno at 6:10 of the second period. Senators defenseman Mark Borowiecki was shaken up after being hit into the boards by Blue Jackets forward Matt Calvert, but he returned to the game.

“We played outstanding tonight,” Anderson said. “From start to finish, we made them earn everything they got, made it hard on the other team to score goals. Tonight was one of those nights we were going to give up less than them, as opposed to trying to outscore them, which was nice.”

Ryan left the game with 4:14 remaining in the third period when he was hit into the boards by Columbus defensemanDavid Savard, who was given a five-minute penalty for boarding and a game misconduct.

The condition of Wiercioch and Ryan will be updated Friday.

“They were laying hits whenever they could, and we were finishing as well,” Blue Jackets forward Ryan Johansen said. “You really had to battle for your chances. There are a lot of big bodies on both sides, and it’s hard to create ice. It was a good game tonight. They just found ways to put it in the net, and we didn’t.”

Karlsson benefited from a Columbus turnover in the neutral zone on his first goal. Ottawa center Jean-Gabriel Pageautook the loose puck and his shot hit the left post behind McElhinney.

The carom went out the other side to Karlsson, who had an open net for his fourth goal at 16:24.

Karlsson made it 2-0 with 1:45 left in the second when his wrist shot from the right-wing boards changed direction and went into the net on McElhinney’s stick side.

The Senators had an apparent goal by Mika Zibanejad called back at 2:47 of the third period after a successful coach’s challenge.

Referee Kevin Pollock ruled McElhinney couldn’t play his position because he was contacted by Columbus defensemanFedor Tyutin as a result of a Borowiecki shove.

“They’ve got a lot of guys that jump into the rush there,” McElhinney said. “All I saw was a couple of bodies come flying at me as I was trying to kind of spread out and get across for that seam pass. After I got clobbered, I really didn’t see anything. I don’t even know who hit me, if it was their guy or we got pushed into the net or how it wound up working out.”

The first period was scoreless after McElhinney stopped Senators forward Mike Hoffman on a penalty shot at 14:09. Hoffman was breaking away when he was tripped by defenseman Kevin Connauton, causing Hoffman to fall into the net.

Hoffman went wide to the right and cut in on the penalty shot, but McElhinney made a save on the shot to the stick side.

Columbus defenseman Ryan Murray said the Blue Jackets need to get back to their game at home against the Nashville Predators on Friday.

“Our energy can be better,” he said. “If we can get it in their end and drive it around below the goal line, that’s kind of our game and that’s where we find a lot of success, so we’ll be looking to do that tomorrow night.”