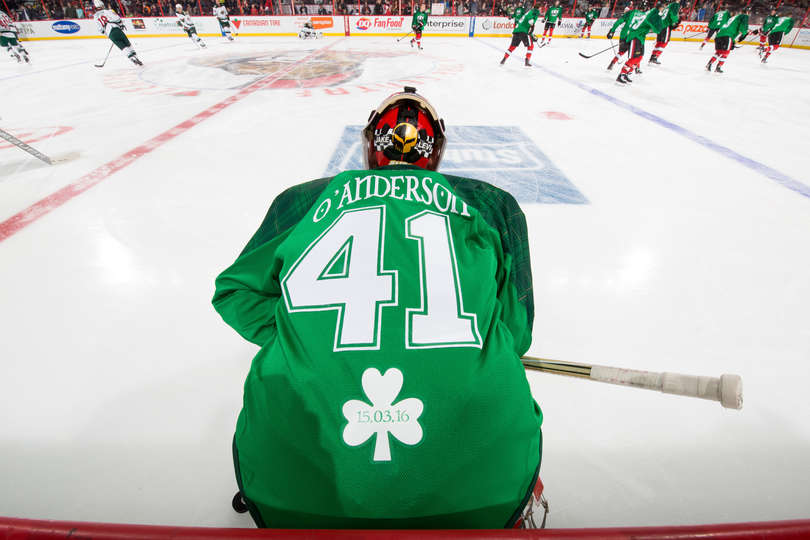 OTTAWA — Erik Karlsson scored with 30.4 seconds left in overtime to give the Ottawa Senators a 3-2 win against the Minnesota Wild at Canadian Tire Centre on Tuesday.

Karlsson scored on a slap shot to the top corner on the glove side of Minnesota goaltender Devan Dubnyk to give the Senators (33-30-8) their second win in a row.

Ottawa’s Mika Zibanejad tied the game with 7.1 seconds left in the third period. Mike Hoffman scored for Ottawa, and Craig Anderson made 23 saves.

The Wild hold the second wild card into the Stanley Cup Playoffs from the Western Conference with 75 points, one more than the Colorado Avalanche.

Zibanejad tied the game 2-2 with Anderson on the bench for an extra attacker. Zibanejad scored on a rebound off a shot byZack Smith after the puck caromed in front off the end boards. Smith shot, Dubnyk made the save, and Zibanejad was behind the Wild defense to knock the puck into the net.

“We played a great 59 minutes and 50 seconds, the team just committed to playing defense, and then we let up for nine seconds,” Wild coach John Torchetti said. “We’ve got to do a better job of collapsing on that play.”

The Wild held the Senators to one shot in the third period until their late flurry.

“We were lucky we got the extra point,” Torchetti said. “Some nights like that, you don’t get that extra point and you play a great game. We battled hard. We can learn a lot from that game. We should have won 2-1. Now we’re on to [play the New Jersey Devils on Thursday]. The game in hand, we got a point, so we’re a point up and we just move from there.”

The Senators are five points behind the Detroit Red Wings, who hold the second wild card in the Eastern Conference. The Red Wings, who lost to the Philadelphia Flyers 4-3 Tuesday, have a game in hand.

Carter jumped out of the penalty box, joined the play and tipped in a pass from Mikael Granlund at 5:14 of the third period for a 2-1 lead.

The Wild failed to score a power-play goal on the road for the first time in 14 games. Their 13-game streak, a Wild record, was the longest in the NHL since the Carolina Hurricanes scored in 17 straight road games in 2005-06.

The Senators tied the game 1-1 at 13:38 of the second period when Hoffman broke an eight-game streak without a goal with his 26th of the season.

Niederreiter made it 1-0 93 seconds into the game on a 2-on-1 during the Wild’s first rush up the ice.

“I really like the way we played, the way we stuck with it. That’s been our challenge,” Senators coach Dave Cameron said. “We didn’t get frustrated tonight after we got behind early. We were playing real well, they got a redirect goal, but we stayed with it. Shut that team down and found a way to win.

“Anything they got tonight, they had to earn. They had to come through us to earn.”

Wild defenseman Jared Spurgeon blocked four shots during a penalty to Minnesota captain Mikko Koivu at 12:43 of the third period and the Wild protecting a 2-1 lead. The last three blocks were on hard shots by Zibanejad.

“You couldn’t give a better example of an athlete than what Spurgeon did for us tonight,” Torchetti said. “That’s the part that for me, for our team moving forward, that’s team commitment. That’s what we need more of.

“[He’s got the] the heart of a lion. The whole team was spurred from it. I just thought the emotion would kind of carry us through there. We got a big point and now we go to New Jersey.”

Spurgeon said, “It’s part of the penalty kill. You’ve got to get in the lanes. It just happened to be mine those three times.”

He said two of the shots hit him in the same spot, but what hurt more was seeing the Senators score with seven seconds left.

“Sort of a weird hop off the back wall there, but we’ve got to do a better job of closing out,” he said. “Seven seconds left, you’ve got to find a way to win those games.”