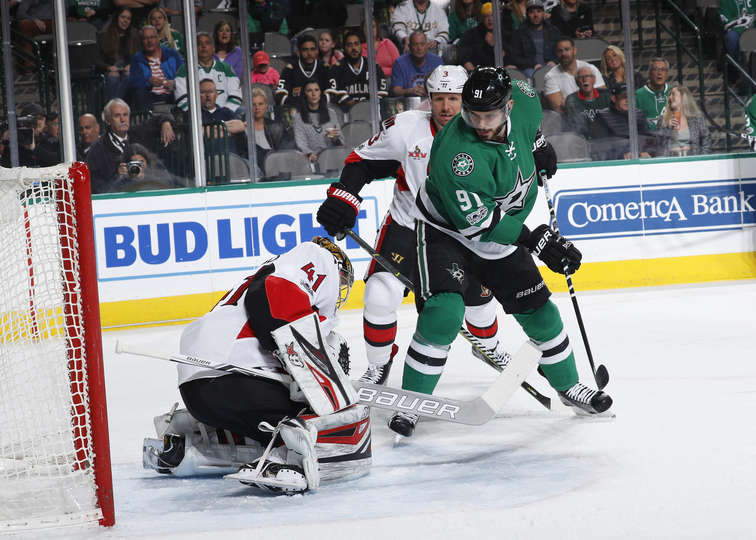 DALLAS — Craig Anderson made 35 saves for the Ottawa Senators in a 5-2 win against the Dallas Stars at American Airlines Center on Wednesday.

It was Anderson’s 146th victory with Ottawa, tying Patrick Lalime for the most in Senators history.

“It’s a credit to the guys in front for all these years of hard work and dedication, and just a byproduct of guys playing hard in front of me,” Anderson said.

Cody Ceci, Viktor Stalberg and Fredrik Claesson each had a goal and an assist, and the Senators (37-22-6) won their fourth straight.

Chris Wideman gave Ottawa a 1-0 lead at 13:41 of the first period on the power play. Stalberg set up the goal with a cross-ice pass.

The Senators made it 2-0 at 15:21 when Claesson scored after a clean faceoff win by Zack Smith against Radek Faksa.

Jean-Gabriel Pageau gave Ottawa a 3-0 lead at 3:21 of the second period. The shot from the slot beat Kari Lehtonen through the five-hole, and the Stars goalie was replaced by Antti Niemi after allowing three goals on 18 shots.

“We probably would have wanted a couple more saves,” Dallas coach Lindy Ruff said. “Tried to change momentum, tried to get it going the right way. I think that’s kind of the history: If a couple go in, a couple bad you want back, a few more go in. Just made the switch to try to get it going in the other direction.”

Tyler Seguin made it 3-1 at 4:30 when he scored on a sharp-angled shot after a pass from Jason Spezza behind the net. Remi Elie had the secondary assist for his first NHL point in his third game.

Spezza scored on the power play at 8:04 of the third period to make it 4-2. Ceci made it 5-2 when his point shot deflected in off Stars defenseman Stephen Johns at 9:01.

“I thought there was times our young D struggled, a couple coverage plays,” Ruff said. “We make it 4-2 and, you know, I just thought we could’ve stayed on our man and we left our man, and all of a sudden we’re putting the puck in our own net again.”

Claesson beat Lehtonen with a one-timer from above the left circle for his first NHL goal. “It feels really good. I kind of waited for this moment for a long time. I’m really happy. It was a faceoff and I wasn’t sure if [Mike Hoffman] was going to take it or not, so I just hammered and an old knuckle puck there,” Claesson said.

Anderson made a left-pad save on Brett Ritchie’s shot from the slot with 6:00 remaining after Curtis McKenzie backhanded a pass from below the goal line.

After getting 19 seconds of power-play time in his first three games since coming to the Senators in a trade from the Carolina Hurricanes on Feb. 28, Stalberg took advantage of the 2:27 he got Wednesday, deflecting Dion Phaneuf’s point shot past Niemi for his second goal with Ottawa.

“I think they stick to defense. We bend, but we don’t break. Sometimes we get hemmed in, but we’ve still got everybody in front of the net blocking shots, sacrificing ourselves. Teams have a tough time scoring against us.” — Senators forward Viktor Stalberg on what he’s learned about them since being traded from the Hurricanes

“He’s really played well in that fourth-line role for us. Even a career high in goals. He’s done a good job managing the puck and even on the penalty kill has been good for us. He’s been a surprise in the season for us, and I think it’s well-deserved.” — Stars coach Lindy Ruff on the one-year contract Adam Cracknell got Wednesday

The Senators dressed 11 forwards and seven defensemen. … Ottawa coach Guy Boucher said he had not decided whether Anderson or Mike Condon would start Thursday against the Arizona Coyotes.