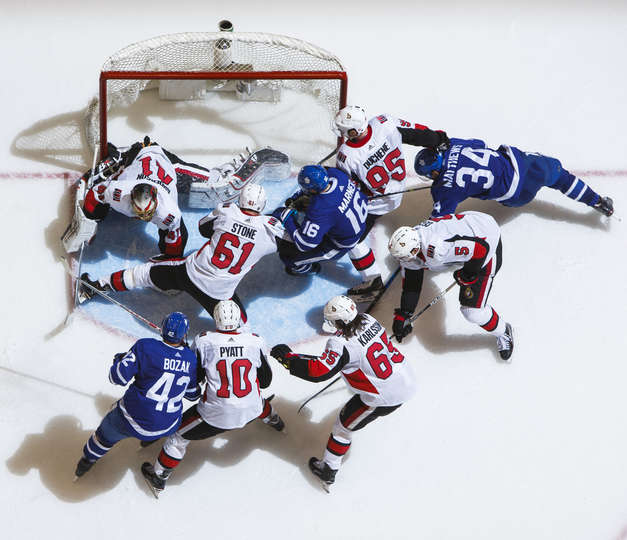 TORONTO — Tom Pyatt broke a tie with 3:05 left in the third period and Craig Anderson made 45 saves to help the Ottawa Senators to a 4-3 win against the Toronto Maple Leafs at Air Canada Centre on Wednesday.

Maple Leafs defenseman Morgan Rielly pinched in at the Ottawa blue line, leading to a 3-on-1 for the Senators. Matt Duchene passed to Pyatt, who skated in alone and shot past goaltender Frederik Andersen’s blocker.

“To see that one go in felt good, and I haven’t scored in a while personally too, so that felt pretty good for me,” said Pyatt, who had gone 20 games without a goal. “Everyone was having some fun out there tonight and Anderson was terrific. We gave up too many shots tonight, they could have had a couple more but Anderson was big for us. It’s just nice to get a win here, we’re making a little bit of progress the last couple weeks.”

Thomas Chabot, Mike Hoffman and Gabriel Dumont scored for the Senators (15-18-9), who have won three of their past four games. Ottawa has won five straight in Toronto for the first time.

Senators coach Guy Boucher said he knew immediately after losing 8-2 to the Chicago Blackhawks on Tuesday that he would start Anderson again. Anderson was pulled against the Blackhawks after allowing four goals on 26 shots.

“You put it behind you as quickly as you can and by playing right away, we didn’t have time to think about it,” Anderson said. “We weren’t good last night and that was obvious but tonight was a complete 180, our guys were battling hard, making the right reads, making the right plays and definitely being a lot stronger in front of our net tonight.”

Andreas Borgman, James van Riemsdyk and Rielly scored, and Andersen made 28 saves for the Maple Leafs (25-17-3), who are 2-1-1 in their past four games.

“It didn’t happen for us. We had lots of opportunity, obviously, but we got impatient,” Maple Leafs coach Mike Babcock said. “We had two pinches that cost us two goals and we were carrying play and had lots of opportunity as you know but, in the end, you’ve still got to play right. You make those mistakes and they capitalize.”

Dumont scored his first goal in 23 games this season — seven with the Tampa Bay Lightning and 16 with the Senators — for a 3-2 lead at 2:15 of the third period. He got to his own rebound after shooting high over the net and put it past Andersen’s blocker.

Borgman made it 2-1 at 18:10 of the second period when his point shot deflected off Duchene and beat Anderson to the glove side.

Van Riemsdyk tied it 2-2 54 seconds into the third period when he took a pass from Tyler Bozak, put the puck between his own legs and shot past Anderson.

“We stuck with it, that’s a high-octane offense over there and two-goal leads are not safe in this league against a lot of teams, especially them,” Duchene said. “I don’t think it surprised us on the bench, obviously we wanted to keep the lead, but you never underestimate their offense.”

The Senators took a 1-0 lead at 11:26 of the first period when Chabot’s shot from the left circle went off Maple Leafs defenseman Roman Polak in the slot and past Andersen.

Hoffman made it 2-0 at 1:52 of the second period. Duchene carried the puck below the goal line and passed in front to Hoffman, who put it between Andersen’s pads.

Save of the game
Anderson’s save on van Riemsdyk at 19:51 of the third period.

Highlight of the game
Van Riemsdyk’s goal 54 seconds into the third period.

They said it
“We played a decent game from start to finish. They played well as well and created their fair share of scoring chances, but Anderson played great for us tonight and we found a way to stick with it. We didn’t change and kept playing all the way through 60 minutes.” — Senators captain Erik Karlsson

“We had tons of chances, I think, all around. Their goalie made some pretty good saves. He stood on his head tonight. I think, all-in-all, we had a pretty solid game and obviously we made mistakes and they capitalized on them.” — Maple Leafs forward Auston Matthews

Need to know
Senators forward Mark Stone had a three-game point streak end (three goals, five assists). … Dumont’s goal ended a 35-game drought. His last goal came on March 13, 2017, with the Lightning. … Senators forward Alexandre Burrows got his 200th NHL assist. … Maple Leafs forward William Nylander had an assist in 19:25 and extended his point streak to four games. He has four points (one goal, three assists) during that span.