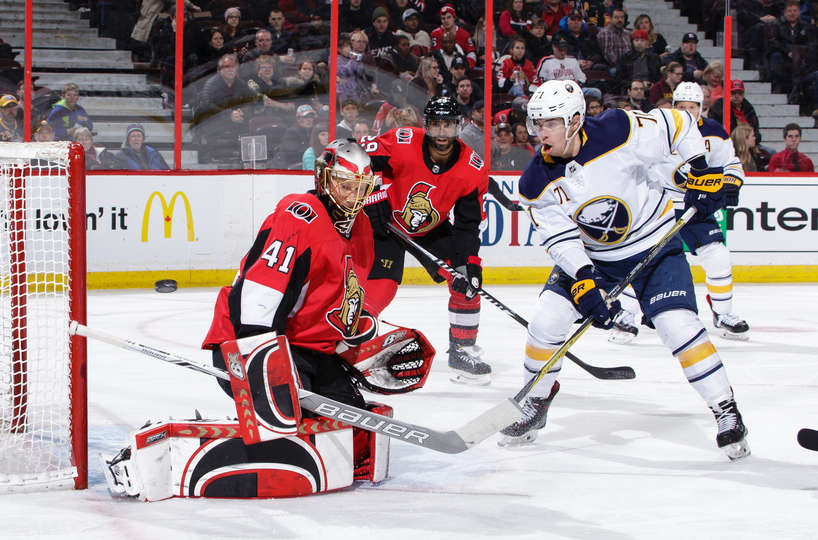 NHL.com Recap
OTTAWA — Marian Gaborik scored and had an assist on the tying third-period goal in his debut with the Ottawa Senators, a 3-2 overtime win against the Buffalo Sabres at Canadian Tire Centre on Thursday.

“It feels good to contribute to a win,” Gaborik said. “It feels that much better.”

“He’s one of my best buddies in the game,” Hoffman said of the Sabres goalie. “I told him this morning when I saw him that I was going to get one on him, so [I’m] fortunate enough to have it be the overtime winner. He played a good game. There’s not much more he could’ve done.”

Derick Brassard scored, Matt Duchene had three assists, and Craig Anderson made 23 saves for the Senators (20-27-9), who had lost two straight.

“He kept us in the game,” Rodrigues said of Lehner. “Those are the games you like to win for your goalie when maybe we’re not playing our best and we find a way to win.”

Hoffman one-timed a pass from Erik Karlsson, who had two assists.

“Karlsson shot the puck a lot today and I thought he was going to try and go through the legs there and shoot it,” Lehner said. “And Hoffman didn’t seem like a threat; he was at a bad angle. Good pass, good one-timer, I want to try and get there though. It was tough.”

Brassard tied the game 2-2 with 31 seconds left in the third period off a pass from Gaborik, who was acquired by Ottawa on Tuesday in a four-player trade that sent defenseman Dion Phaneuf to the Los Angeles Kings.

“Everybody knows what he’s been in the NHL,” Senators coach Guy Boucher said of Gaborik. “He got the opportunity to play with good players like Duchene, who’s been on fire for a long time now, and [Hoffman]. I think those guys have done a good job together.

“I really like the fact that at the end, he made a big difference on a really smart play. Not a lot of guys would’ve had the poise there to dish it to [Brassard]. There’s a lot of experience there, so we definitely benefited from his experience tonight and we’re looking forward to more of it, for sure.”

Gaborik deflected a point shot from Karlsson past a screened Lehner to tie it 1-1 at 5:15 of the third.

Wilson gave the Sabres a 1-0 lead at 6:31 of the first period when he took a drop pass from Johan Larsson and beat Anderson with a wrist shot.

The Sabres took a 2-1 lead at 15:31 of the third period when Rodrigues got a pass from Kyle Okposo on the rush and took a wrist shot that went off the post and in.

Goal of the game
Brassard’s goal with 31 seconds left in the third period.

Save of the game
Anderson’s save on Marco Scandella at 10:29 of the third period.

They said it
“I just tried to hit the net. The ice is a little choppy in overtime, so you never want to try and put it in the top corner. It’s more so just get the puck on net, and that’s what I tried to do.” — Senators forward Mike Hoffman

“It was one of those games. We didn’t really get into it, but came out in the third period with a 1-0 [lead]. We tried to keep it, but they’re pretty good offensively over there and they kept getting some chances over there and they got by.” — Sabres goaltender Robin Lehner

“To be honest with you, I’m very excited to be working with the young guys. We’re not where we would’ve wanted to be, but sometimes you are where you are because you need to take a detour to take a step forward.” — Senators coach Guy Boucher

Need to know
Lehner hasn’t lost to the Senators in regulation in eight starts (5-0-3). … Hoffman tied Karlsson and Kyle Turris for second in Senators history with his fifth regular-season overtime goal; Mike Fisher had seven. … Duchene has eight points (two goals, six assists) in his past five games.