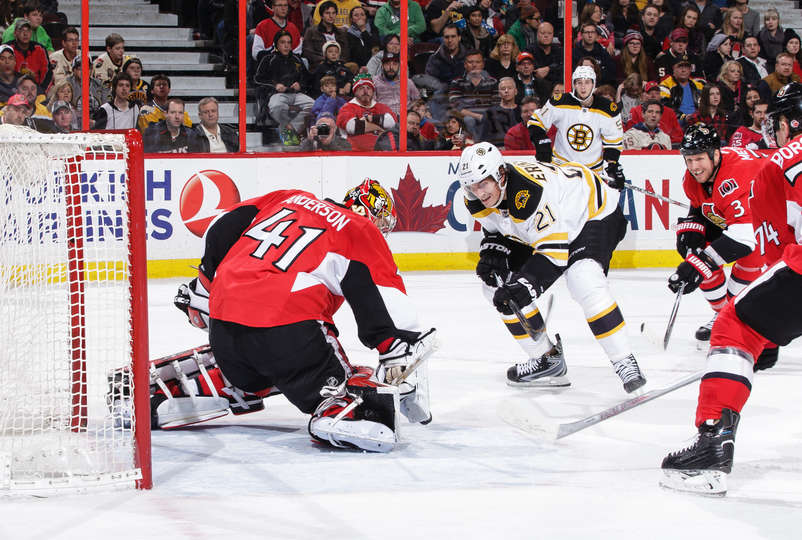 Recap:
OTTAWA – It has become a familiar and often successful story for the Ottawa Senators: Get some opportunistic scoring and leave the rest to goaltender Craig Anderson.

Mark Stone scored two goals and Anderson made 38 saves to help the Senators to a 3-1 win against the Boston Bruins at Canadian Tire Centre on Sunday.

Mika Zibanejad scored for the Senators (18-12-6), who ended a two-game losing streak.

The Bruins (19-12-4) lost in regulation for the third game in a row, matching their longest losing streak of the season.

David Krejci scored for the Bruins and left the game after the second period with an upper-body injury. He did not return. Tuukka Rask made 19 saves for the Bruins.

Anderson faced at least 30 shots in a game for the 21st time in 29 games this season.

“Obviously Andy is playing great for us,” Stone said. “Asking him to do that every single night is not going to cut it. We realize he’s a big part of our team, but at the same time we understand he can’t do this every single night.

“We’ve got to find ways to limit the shots and give him more of a breather.”

Anderson has faced 148 shots in his past four games and stopped 141 of them. The Senators have given up an average of 34 shots per game this season, the most in the NHL.

Anderson wasn’t complaining about the workload, though.

“Sometimes statistics don’t tell the whole story. For me, the way the game was tonight, I thought we played a solid game,” he said. “We were in the right spots at the right time. We gave up a lot of perimeter shots with some traffic, but our guys did a great job blocking shots, boxing out; the little things that make a difference.”

The rest of the time?

“Sometimes fate is on your side, and right now I feel like I’m in the right position, making them try to beat me with a perfect shot,” Anderson said.

The Senators and Bruins play again Tuesday in Boston.

The Bruins were happy with their effort and gave Anderson credit.

“I don’t think that you have to second guess that the effort wasn’t good enough,” coach Claude Julien said. “I think at the end of the day, they took advantage of their chances and made the most of it and we had ours, had lots of them. Their goalie played well for them tonight and we weren’t able to bury ours and I think that’s really the story of the game tonight. One shot away and we weren’t able to get that.”

Stone and Zibanejad scored in the late stages of the first and second periods, respectively.

Zibanejad scored the winning goal at 18:21 of the second period after a good example of creating a scoring chance by craftily shooting the puck off the goalie’s pad.

After some good work in the neutral zone to get to the Bruins zone, Senators forward Mike Hoffman passed the puck to wing Bobby Ryan. He’s playing with a broken finger, but that didn’t seem to hinder his ability to put a low shot on Rask’s long-side pad. The puck rebounded to Zibanejad in the slot, and he scored into the top half of the net.

The Bruins tied the game 1-1 at 7:54 of the second period after video review confirmed the puck had crossed the goal line after Krejci jammed it under Anderson’s left pad.

Krejci made a good play to kick the puck back up to his stick after he was checked on the edge of the crease.

The Senators ended the Bruins’ streak of 26 straight penalty kills when they scored with 19 seconds left in the first period. Working well below the goal line, Stone banked the puck off Bruins defenseman Dennis Seidenberg and into the net.

Stone said he was trying to pass the puck to Ryan, who wasn’t near the front of the net.

“It was just a terrible play that ended up working,” Stone said.

The Senators were on the power play after Boston forward Jimmy Hayes was given an instigator penalty for fighting with Senators defenseman Mark Borowiecki. Hayes went after Borowiecki after he put a heavy hit on Bruins forward Frank Vatrano along the right-wing boards in the Boston zone.

Stone scored his second of the game into an empty net at 19:06.

For the Bruins, playing their second game in less than 24 hours, the task of coming back was made that much more difficult without Krejci, their second-leading scorer after Patrice Bergeron, for the third period.

The Bruins had 31 shots in the first 40 minutes and eight in the third period.

Boston defenseman Torey Krug missed the game after being injured in the 6-3 loss to the Buffalo Sabres on Saturday.

“Krejci is a big part of our team,” Julien said. “When you lose a guy like him, Torey Krug last night, not to name the others who have been out for while … we’ve just got to suck it up. Guys have to step up and do the job, it’s as simple as that.”