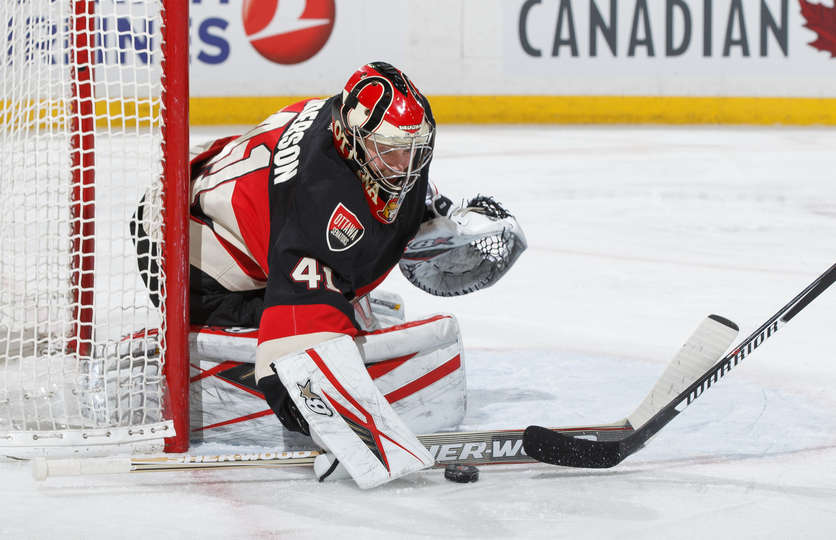 OTTAWA – The Ottawa Senators, who have struggled against the Carolina Hurricanes, won 4-2 at Canadian Tire Centre on Thursday.

The Hurricanes lost in regulation for the fourth time in their past 17 games. Carolina is 14-4-4 against the Senators in the past 22 games.

Ceci scored the game-winner at 3:50 of the third period, his seventh this season, on a shot that bounced off the stick of Hurricanes captain Eric Staal and eluded Lack.

“It wasn’t the way I drew it up, but we’ll take anything right now,” Ceci said. “It’s just nice to get the win tonight and to get two in a row, that’s huge for us.”

Ceci liked the way the Senators tightened up and held the lead in the third period.

“We’ve been known to give up a couple of late goals and kind of deflate a little bit, but tonight we played strong the entire way through,” Ceci said.

The Hurricanes were 4-for-4 on the penalty kill and 1-for-2 on the power play.

“Our 5-on-5 had to be better,” said Jordan Staal. “There’s always little things we can work on. We came out a little flat, I think, our legs weren’t going and the puck wasn’t moving like we normally can. We started playing a little better towards the second and third. Our special teams did do a good job, but when we’re playing at our best we’re controlling the game and we’re moving our feet, we’re moving the puck quick and we didn’t see that tonight.”

The Hurricanes penalties came at particularly inopportune times; Phillip Di Giuseppe took a high sticking penalty at 20:00 of the first period and Carolina was called for a too many men on the ice penalty in the third period. Jordan Staal and Elias Lindholm, two of Carolina’s best players, accumulated extra ice time killing penalties.

“I thought we made it harder than we needed to tonight with some of the penalties,” Hurricanes coach Bill Peters said. “We took a penalty at the end of a period when there was no threat of anything negative happening to you at that stage, so you start shorthanded.

“We took a penalty in the third that’s avoidable, too many men on the ice and that just shortens the trap, right? You still want two more minutes to play 5-on-5 to see if you can get the game tied up. We made enough mistakes tonight to make it harder than it needed to be.”

The Senators scored the first goal for the 20th time in 59 games when Chiasson scored off a setup by Curtis Lazar at 7:36 of the first period. Lazar controlled a rebound and passed to Chiasson in the slot, who scored his fourth this season, and his first since Jan. 16.

Jordan Staal tied the game 1-1 with 23 seconds left in the first after Hurricanes rookie forward Brett Pesce skated through the neutral zone and eluded Senators forward Chris Neil, then defenseman Dion Phaneuf, as he worked down and circled the Ottawa net.

Pesce passed the puck to John-Michael Liles at the left point, who passed across the ice to Jaokim Nordstrom, who then took a shot. Staal deflected the shot through Anderson for his 14th this season. Staal has two goals and two assists in his past four games.

Smith gave the Senators a 2-1 lead at 5:39 of the second period. His shot from the left wing circle found its way by Lack’s left arm and into the net for Smith’s fourth goal in his past seven games, and 13th this season.

“Obviously I want the second one back,” Lack said. “It’s a really bad goal. It was decisive for us so obviously I want that back. Other than that, I felt like we battled hard and we could have got a couple more, but it wasn’t our night.”

The Hurricanes tied the game 2-2 on the power play with 1:43 left in the second. Nash scored his seventh this season when his wrist shot beat Anderson over the right shoulder.

Stone scored an empty-net goal with one second left, his 18th this season.

Senators coach Dave Cameron has been preaching for a consistent effort from his players and saw the win on Thursday as a step in that direction.

“I really liked tonight’s game, the results first and foremost, but secondly, this team came in and we knew it was going to be a challenge, because this team pressures you,” Cameron said. “That’s an area we’ve had difficulty with, teams that pressure us. We don’t stick with it. We tend to get impatient and stubborn and try to create something when it’s not there. It’s the thing we’ve been trying to correct.

“I really liked the result, but liked how we played.”

The Senators host the Detroit Red Wings on Saturday.

Jordan Staal said he was thankful the Hurricanes play again Friday against the San Jose Sharks at home.

“If (the losses) pile up you’re out of the mix. Fortunately, we’re right back into another one tomorrow,” Jordan Staal said. “You can always learn from (losses), but we’ll let it go and get back to work tomorrow.”