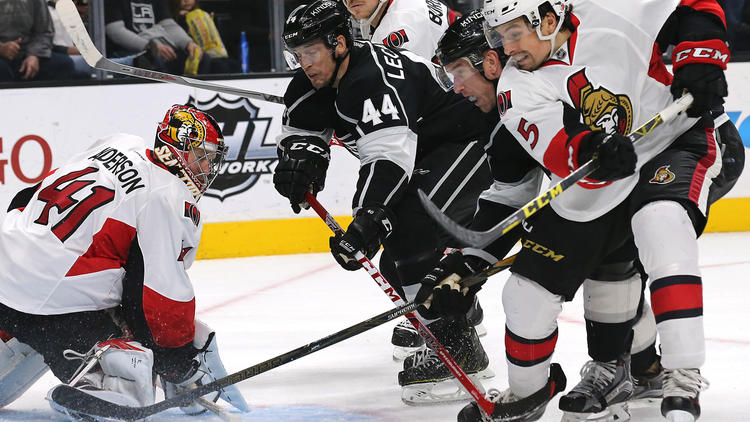 NHL.com Recap
LOS ANGELES — The Ottawa Senators were facing a third-period deficit against one of the best finishing teams in the NHL riding high since the Christmas break.

Mika Zibanejad scored on the power play with 6:50 remaining and the Senators rallied from a two-goal deficit with four goals in the third period for a 5-3 win against the Los Angeles Kings at Staples Center on Saturday.

“We were desperate for a win and we found a way to get it done,” said Ottawa goalie Craig Anderson, who made 30 saves for his 200th NHL win.

Zibanejad’s game-winner capped a comeback from down 3-1 early in the third period. He took a pass from Bobby Ryan on the left side and scored on a wrist shot during a double-minor penalty to Nick Shore for high sticking.

“It’s a huge win, especially this time of year,” Ottawa coach Dave Cameron said. “We talk all the time about sticking with it and we stuck with it today.”

The Kings (27-13-3) had their second regulation loss since the Christmas break, and it was uncharacteristic.

Los Angeles led 3-1 on Tyler Toffoli’s goal 3:05 into the third before Ottawa rallied with goals by Ryan and Jean-Gabriel Pageau in 26 seconds to tie the game, 3-3.

Toffoli tapped in Milan Lucic’s pass from the corner to finish a rush for his Kings-leading 21st goal.

The Kings were 17-2-0 when leading after two periods. The loss broke a 7-1-1 run since the Christmas break and coach Darryl Sutter said he’s seen some cracks.

“We’ve been playing sloppy for quite a few games now,” Sutter said. “I think we used fatigue as an excuse the last three or four games. We didn’t get much from top to bottom today.”

Ryan put Zibanejad’s cross-ice pass into an open net at 8:08. Pageau whacked at the puck on the stick of Kings defenseman Jake Muzzin and it shot past goalie Jonathan Quick at 8:34 to tie the game 3-3.

“We simplified,” Ryan said. “We put pucks to the net and had a couple of shifts when our lines got going and we used our bodies to create some speed and some size. We wore them down and got some breaks too.”

Jeff Carter scored in the first period, and Vincent Lecavalier scored his first goal with the Kings when he grabbed a loose puck on the power play and lifted a shot at 7:48 of the second for a 2-0 lead. Defenseman Christian Ehrhoff made a blind pass across the slot and it slid over to Lecavalier, who was traded to the Kings by the Philadelphia Flyers on Jan. 6.

Ottawa pulled to 2-1 in the second on Alex Chiasson’s first goal in 26 games. The Kings couldn’t control a long stretch pass, and Chiasson tapped in Curtis Lazar’s rebound at 11:37. Chiasson was scratched the previous four games.

Mark Borowiecki scored an empty-net goal to make it 5-3 with 14 seconds remaining.

Anderson stopped Toffoli on a penalty shot attempt late in the second period after Toffoli was bear hugged by Erik Karlsson on a breakaway.

Anderson said he wasn’t aware of his 200th win until after the game.

“It’s a test of time for myself,” Anderson, 34, said. “If I can look back at my career and see how long it took me to get there, and the paths that I’ve had to take. Credit to the guys I’ve played with throughout the years, and the current team I’m with.”