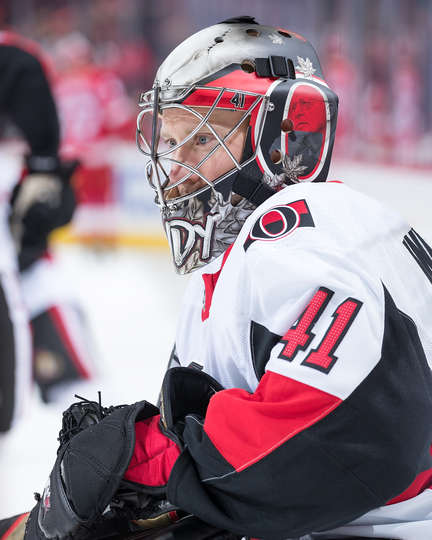 “This was good because we needed one on the road,” Senators coach Guy Boucher said. “This looked like the way we play at home.”

Thomas Chabot had a goal and an assist, and Mark Stone scored for Ottawa (14-15-4), which had scored two or fewer goals in its last five games, losing four (1-3-1). Craig Anderson made 26 saves.

“I thought this was a really complete team effort,” Anderson said. “We played well in all three zones and the guys were winning a lot of one-on-one puck battles in our end.”

“We had a slow start and then we played faster in the second period,” Red Wings coach Jeff Blashill said. “We were forcing turnovers and creating chances, then we slowed everything down in the third period. I don’t understand why.”

Stone gave the Senators a 3-2 lead at 7:08 of the third period, knocking home a loose puck in the crease for his 16th goal. He has 12 points (seven goals, five assists) in his past 10 games.

“We’ve really been struggling on the road and we’re trying to get something going,” Stone said. “We were aggressive in the third period and didn’t allow them anything.”

Stone was the first player to realize that Stefan Elliott’s shot had ended up slightly behind Howard, not under him.

“He’s one of my favorite players, and that sequence is why,” Blashill said. “He created the turnover in the neutral zone and then he makes a smart play to finish it.”

The Senators took a 1-0 lead at 8:19 of the first period when Tierney scored off a pass from Ryan Dzingel to finish a 2-on-1 break. The rush was set up when Larkin’s stick broke on a shot from the point.

“That’s a tough play because we’ve got a scoring chance and suddenly the puck is going the other way,” Larkin said. “There’s nothing you can really do.”

Stone had a goal taken away by replay review at 9:25, but Chabot gave the Senators a 2-0 lead at 13:57. Coming off the bench, Chabot one-timed Colin White’s pass under the crossbar for his ninth goal.

“It was a great play by [White] to wait for someone to join in the rush,” Chabot said. “I obviously put a lot of weight on that shot but I wasn’t expecting it to be that good.”

The Red Wings cut it to 2-1 at 18:20 when Tyler Bertuzzi intercepted a clearing attempt and slid the puck to Glendening for a backhand into the top of the net.

Larkin tied the game 2-2 at 12:08 of the second period, coming out of the penalty box and taking a pass from Frans Nielsen before scoring on a breakaway. Larkin has nine points (four goals, five assists) in a six-game point streak.

“Frans gave me a great pass but I had to kick it up to my stick because I knew I didn’t have time to stop and wait,” Larkin said.

Anderson blamed himself for alerting the Red Wings to the scoring opportunity.

“I started slapping my stick with 3-4 seconds left, and I put us at a disadvantage,” he said. “Our guys didn’t have time to get into position and the Red Wings knew he was about to hit the ice.”

They said it
“We knew that we haven’t been good enough on the road, and we didn’t play well at all in [a 3-1 loss at] Nashville [on Tuesday]. Tonight we played with a lot of focus and it started with our team defense.” — Senators forward Colin White

“With two days off we’ve got to get off to a better start, especially since we haven’t been playing well in the last couple games. They were hounding the puck, we played too slow.” — Red Wings forward Luke Glendening

Need to know
Chabot has nine goals in 33 games, as many as he scored in 63 games as a rookie last season. … Tierney scored twice for the fourth time in his NHL career, and the first time since Nov. 11, 2017. … Elliott’s assist was his first point for the Senators. … Senators forward Bobby Ryan played 19:30 in his first game after missing three with a concussion. … Larkin had a game-high 15 shot attempts, including eight on net.