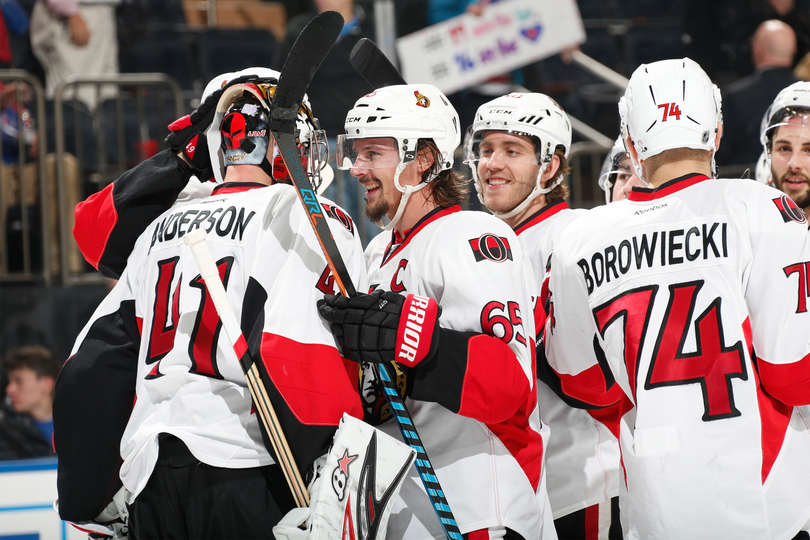 The Ottawa Senators goalie made 33 saves in a 2-0 win against the New York Rangers at Madison Square Garden on Sunday and is 7-1-1 with three shutouts in his career at the home of the Rangers.

“It’s New York, man,” Anderson said. “It’s one of those buildings (where) there’s a lot of history. A great team over there. It’s one of those things you just get up for. Historic buildings … who knows how long they’ll be around for and you’re fortunate enough to be a part of it, and that’s kind of the way I address that mentally.”

It was the third shutout of the season for Anderson, who made 13 saves in the first period.

Anderson made 32 saves in a 2-1 win against the Carolina Hurricanes on Saturday and was not supposed to start the game, but told coach Guy Boucher he felt good.

“He wanted that one, and well, you can see what happens when your No. 1 wants to play a game,” Boucher said. “You don’t want to say no.”

The Senators (14-7-1), who won their season-high fourth straight game, got goals from Jean-Gabriel Pageau and Mark Stone.

Pageau gave Ottawa a 1-0 lead at 1:54 of the second period with his third goal of the season.

Stone scored his sixth goal on a power play in the second period to make it 2-0 at 16:11 after taking a feed from Mike Hoffman.

“Zero mistakes,” Rangers center Derek Stepan said. “They didn’t make one all night and the two that they did make we had our chances and it didn’t end up in the back of the net. … At the end of the day, you don’t win any hockey games with zero goals.”

“Give them credit,” Rangers coach Alain Vigneault said. “They played a strong game and made it very hard on us tonight to get anything as far as grade-A opportunities.”

Tom Pyatt got the puck behind the net and passed to Pageau in front of the crease, who stuffed it behind Raanta for the first goal of the game.

With the Rangers on a power play in the first period, Anderson robbed Brandon Pirri who had an open net after taking a pass from Rick Nash, sliding from left to right to make a pad save at 15:47.

With 7:52 remaining, Rangers defenseman Kevin Klein took a shot that got past Anderson, but Senators defenseman Mark Borowiecki swatted it out of the crease before several Rangers had a chance to put it in the net.Highlight of the game

Anderson made three saves on a Rangers power play late in the second period to preserve the Senators’ 1-0 lead. Ottawa was 4-for-4 on the penalty kill.

“It’s a great feeling. It was a nice ovation. I’m really thankful for the fans there that they appreciated my work the last four years. For us as a team, we played really strong. … I know this building pretty well. After one or two periods, the crowd was a little frustrated and after that, their players were frustrated as well.” – Senators center Derick Brassard on his return to Madison Square Garden

“Their goalie played a great game and he has been one of the best goalies early in this year. He was good, but when you’re in the other end, you also want to [make] game savers and I just couldn’t [make] them tonight.” — Rangers goalie Antti Raanta

“He’s been playing great for us all season long. He’s there for us when we need him most. When someone makes a mistake, he is there to clear it up.” — Senators defenseman Erik Karlsson on Craig Anderson

Derick Brassard played against the Rangers for the first time since he was traded to the Senators, along with a seventh-round pick at the 2018 NHL Draft, for center Mika Zibanejad and a second-round pick in 2018 on July 18. He spent parts of four seasons with New York from 2013-16 and had 174 points (69 goals) in 254 games, including a career-high 27 last season, which led the Rangers and received a standing ovation when a video tribute was played in the first period. … Matt Puempel played the Senators for the first time since he was claimed off waivers by the Rangers on Monday. He was drafted by Ottawa and spent the first five-plus seasons of his career in their organization. … Ottawa has scored two or fewer regulation goals in 14 of its past 16 games. … The Senators scored their seventh power-play goal of the season, tied for the fewest in the League.