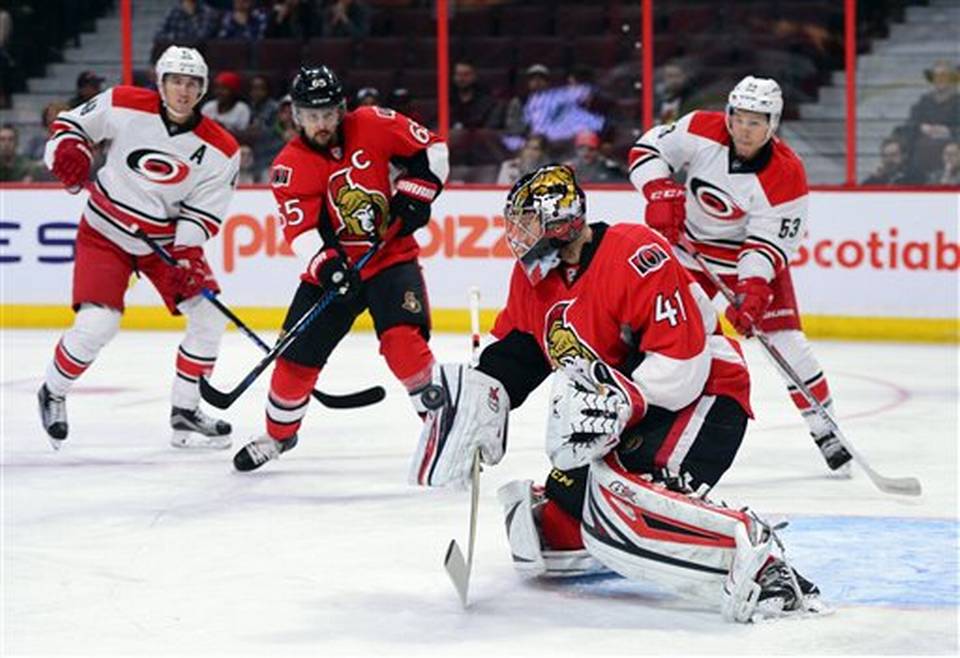 OTTAWA — Kyle Turris scored at 3:09 of overtime to give the Ottawa Senators a 2-1 win against the Carolina Hurricanes at Canadian Tire Centre on Tuesday.

Turris, who has two overtime goals this season, skated in on the left wing against Carolina defenseman Jaccob Slavin and used him as a screen to score with a shot high to the glove side.

“That’s what I like to do,” Turris said. “I’ve used that shot a few times before. It’s tough for a goalie to see through guys’ legs. I’ve got so much speed (there) … the gap’s a little loose, so it gives me time to shoot it.”

Turris has five regular-season overtime goals and two in the Stanley Cup Playoffs.

The Senators tied it at 13:18 with the teams playing 4-on-4. Tom Pyatt passed the puck from the right wing corner to defenseman Cody Ceci at the right point. He froze the defenders by faking a shot and passed the puck to Dion Phaneuf, who scored his second of the season with a shot from the top of the left circle.

Senators forward Mark Stone did not play in the third period because of an upper-body injury.

The Hurricanes outshot the Senators 12-1 through the first half of the first period.

Turris, gaining speed down the left wing during a Hurricanes line change in overtime, took a pass from Senators defenseman Erik Karlsson just outside the Carolina blue line. Turris wound up in a 1-on-1 situation with Slavin and the Carolina defenseman shifted his stick to the outside to take that lane away from Turris. The Ottawa forward then had room to shoot, using Slavin as a screen, and snapped a shot into the top corner on Ward’s glove side.

Playing without a stick, Anderson made a save through traffic on Carolina forward Joakim Nordstrom six minutes into the game. The Senators were on their heels at the time and already trailing 1-0. It came after Anderson had already made a good save on forward Jeff Skinner and gave the Senators a chance to get back into the game.

Slavin scored on a great individual effort, cutting off a pass by Ottawa forward Jean-Gabriel Pageau and charging up the middle of the ice. He stepped around Pageau at the Ottawa blue line and scored on a strong backhand under the crossbar.

Early in overtime, Carolina forward Elias Lindholm got a break down the slot in the Ottawa zone. Senators forward Mike Hoffman caught him from behind and lifted his stick, preventing a good scoring chance with the game on the line.

“It’s beyond words, the way that he’s playing right now with the circumstances and what he’s going through with his wife. It’s incredible. He’s an inspiration to all of us, I will tell you that. He’s just incredible to be able to be doing what he’s doing for our team right now, with what he’s going through.” — Ottawa Senators defenseman Dion Phaneuf on the play of goaltender Craig Anderson, whose wife, Nicholle, was diagnosed with cancer

“The effort was good, probably one of our better efforts for 60 minutes, 65 minutes, 64, whatever it was. I like the effort. I liked the execution. I thought both teams made a push at certain times.” — Hurricanes coach Bill Peters

“I thought we came out strong. I thought it was a pretty solid road game. There weren’t any crazy mistakes and we didn’t give them too much. They found a way to get two instead of our one, so it was a close game. There were a lot of good things out there.” — Hurricanes forward Jordan Staal

“I’ve got to look at it. I haven’t seen it other than live. It looked like a situation where maybe you can get stick on puck. I don’t know where our guy had his stick, but hopefully it was out in front of him, causing a little bit of havoc on the shot. If it’s not, then we’ve got an issue there.” — Hurricanes coach Bill Peters on Jaccob Slavin‘s play on the winning goal

The Senators are 4-1-0 at home. They started a stretch in which they play 12 of 17 games at home. … The Senators, last in the NHL last season in shots allowed, have outshot their opponent in six of nine games this season. … The Hurricanes were 0-for-3 on the power play and are 1-for-9 in their past four games. … With his assist, Karlsson has points in six of nine games. … The Hurricanes have at least a point in 21 of the past 26 games against the Senators (16-5-5).