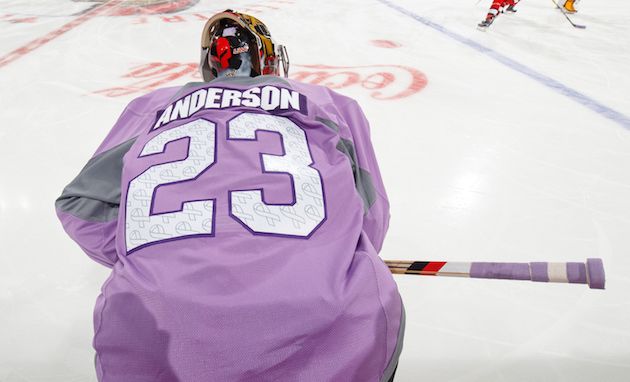 NHL.com Recap
OTTAWA — Craig Anderson made the save on two third-period penalty shots, and Drake Batherson scored in his NHL debut for the Ottawa Senators in a 2-1 win against the Detroit Red Wings at Canadian Tire Centre on Thursday.

“You couldn’t draw it up any better,” Batherson said. “For a night to happen like this, score a goal in my first NHL game. It’s something I’ve dreamed of since I was a kid, scoring that first goal and having my whole family here. I’ve got around 15 people here tonight to see it. My buddies back home are watching, too, so it’s a special night, one that I’ll never forget.”

Cody Ceci scored, Matt Duchene had two assists and Anderson made 34 saves for Ottawa (8-8-3), which has won two of its past three games.

“We haven’t done that that much this year,” Anderson said of holding their opposition to a single goal. “I think that was a great job by our guys holding down the fort there. I think we limited, as best we could, odd-man rushes. Our [defensive] zone play was a lot better, so I think we’re going in the right direction.”

Michael Rasmussen scored, and Jimmy Howard made 34 saves for Detroit (8-9-2), which had won four straight.

“Both goalies were good,” Red Wings coach Jeff Blashill said. “Both teams had chances and didn’t score as much as they would like. Certainly, we had real chances, in my mind, that we didn’t score on.”

Said Red Wings defenseman Niklas Kronwall, “We weren’t good enough to win tonight. Sure, we had some opportunities that we could have done more with, no question. But we didn’t. That’s why we (lost).”

Ceci gave the Senators a 1-0 lead at 19:21 in the first period, scoring on a rebound off Duchene’s initial shot into an open net.

Rasmussen tied it 1-1 at 3:55 of the second period when he redirected Mike Green’s shot from the point.

Batherson scored to make it 2-1 at 7:05 on wrist shot that beat a screened Howard blocker side on the power play. He is the sixth player in Ottawa history to score a goal in his NHL debut and second to do so this season (Maxime Lajoie on Oct. 4).

“It’s a special moment for him,” Anderson said. “We’re all excited for him. It’s a moment that he’s going to remember for the rest of his life.”

Anderson stopped Andreas Athanasiou (9:10) and Rasmussen (15:59) on penalty shots in the third period to preserve the 2-1 lead.

“Those are real good players taking the penalty shots,” Blashill said. “So good for Craig Anderson. He’s been a good goalie in the League for a long time. In the end, he made two critical plays in critical moments.”

They said it
“The whole game, in my opinion, comes down to power play. Our power play, when we had a chance to do something in the second period, we were no good on it. And that’s unacceptable. To me, that’s the whole difference.” — Red Wings coach Jeff Blashill

“[Duchene] said he was going to win [the face-off] through his legs, probably, so he said to come in and support him, and I just [saw] a lane, honestly, and figured I’d give it a rip and luckily it went in. I kind of blacked out. I didn’t even remember my celebration when I got back to the bench.” — Senators forward Drake Batherson on first NHL goal

Need to know
It was the first time in Senators history they faced two penalty shots in one game, and the 17th time NHL history. … The Red Wings will practice in Ottawa on Friday morning. A forecast of heavy snow kept them from traveling after the game.