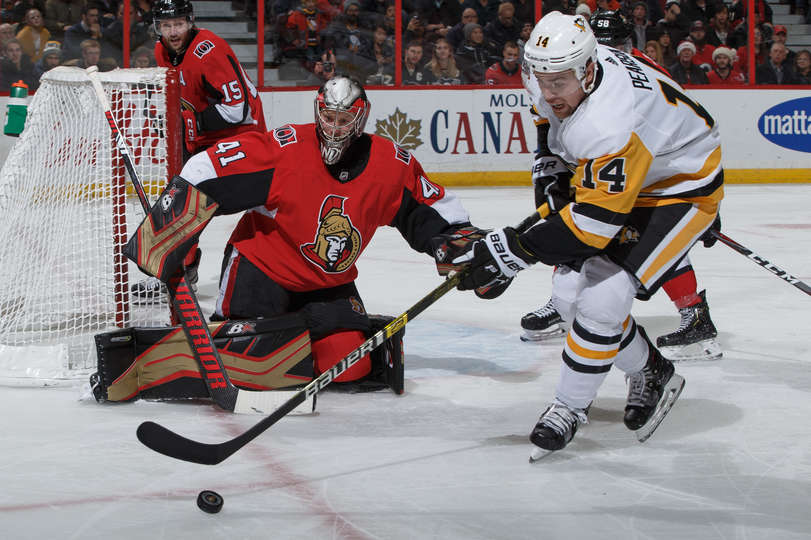 Highlights
Postgame
NHL.com Recap
OTTAWA — Ryan Dzingel scored 1:20 into overtime to give the Ottawa Senators a 2-1 win against the Pittsburgh Penguins at Canadian Tire Centre on Saturday.

Dzingel took a cross-ice pass from Mark Stone and put a wrist shot just under the crossbar from below the right face-off circle on the power play after the Penguins were called for too many men on the ice 58 seconds into overtime.

“[Stone] said he missed me on the 5-on-4 right before,” Dzingel said. “So I knew he was looking for me. Obviously, 4-on-3, we’re trying to get the puck in his hands, and he makes things happen.”

Thomas Chabot had a goal and an assist, Stone had two assists, and Craig Anderson made 35 saves for the Senators (13-14-3), who won after being swept by the Montreal Canadiens in a home-and-home.

“Considering all the circumstances, that’s an outstanding win for us,” said Ottawa coach Guy Boucher, referencing the loss of forwards Matt Duchene (groin) and Bobby Ryan (concussion), who were placed on injured reserve Saturday. “Great character and the guys sticking together and finding a way, and that’s what we told ourselves: There’s always a way.”

Jean-Sebastien Dea scored, and Casey DeSmith made 27 saves for the Penguins (12-10-6), who lost for the first time in three games.

“I thought we dominated a lot of the game,” Pittsburgh coach Mike Sullivan said. “We couldn’t find a way to score more goals, but there was a lot to like about our effort tonight.

“I felt we had a lot of opportunities to shoot and we passed them up. I thought [Letang] had a bunch of them from the top of the power play in the middle of the ice. Those shot opportunities, they’re good shot opportunities from the middle because usually the rebound goes to an advantageous area if you don’t score on the initial shot. I think sometimes our team, we’re guilty of that because we’re always looking for the next play.”

Chabot one-timed a pass from Stone at the left point to give the Senators a 1-0 lead at 4:24 of the first period.

Dea scored from the bottom of the right face-off circle to tie it 1-1 at 3:27 of the second.

“It feels really good, obviously, to get that first goal in that first game,” said Dea, who was recalled from Wilkes-Barre/Scranton of the American Hockey League on Friday after being claimed off waivers from the New Jersey Devils on Nov. 29. “It’ll give me a lot of confidence moving forward.”

They said it
“I still think we can give ourselves a better chance in the third, staying out of the box. And in overtime there, same thing. I think we did a lot of good things, but you can’t expect to win games, especially close games, when you put yourself in that position time and time again.” — Penguins captain Sidney Crosby

“I thought we did a pretty good job of limiting their time and space, frustrating them a little bit, and that’s the way we have to play to even have a chance to win. We’re not going to out-skill teams and make 19 fancy passes to beat everybody. We’re going to be hard-nosed, hard to play against, and make sure that we get our goals and our defending through hard work.” — Senators goaltender Craig Anderson

“I watched the replay there, standing at center ice. It was pretty nice. [Ryan Dzingel] hit a little corner there, maybe a little bit bigger window than [Sidney Crosby] hit the other day (in Pittsburgh’s 6-2 win against the New York Islanders), but still a pretty good shot.” — Anderson on Dzingel’s game-winning goal

Need to know
The Devils claimed Dea off waivers from the Penguins on Sept. 28. He had five points (three goals, two assists) in 20 games for New Jersey before being put on waivers. … The Senators had 27 blocked shots. … Ottawa is 5-0-0 in Saturday night games this season. … Chabot leads NHL defensemen with 33 points (eight goals, 25 assists) in 30 games. … Ottawa’s Zack Smith appeared to score 11 seconds into the second period, but Sullivan challenged for offside, and video review showed Smith entered the zone before the puck four seconds into the period.