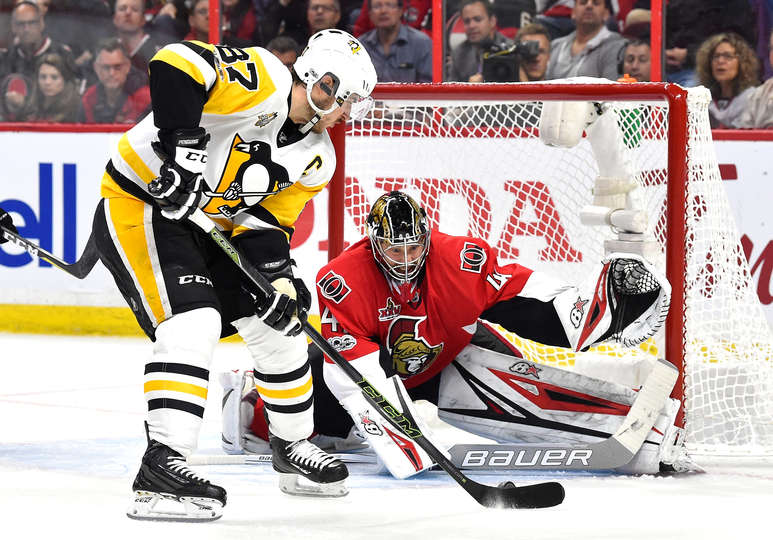 OTTAWA — Craig Anderson made 45 saves to help the Ottawa Senators avoid elimination with a 2-1 win against the Pittsburgh Penguins in Game 6 of the Eastern Conference Final at Canadian Tire Centre on Tuesday.

“You know, as far as tonight, you just try to stay in the moment as best you can and focus on the baby steps,” Anderson said. “One shot at a time, and the big picture takes care of itself when you worry about the details.”

The best-of-7 series is tied 3-3 with Game 7 at Pittsburgh on Thursday. The winner will advance to the Stanley Cup Final against the Nashville Predators with Game 1 on Monday.

Anderson was pulled from a 7-0 loss in Game 5 on Sunday after allowing four goals on 14 shots.

“The moment I got yanked in that game, it’s gone,” he said. “You can’t change what happened in the past. So from that moment on, you have to look forward and get ready for the next one. So as soon as that happens and you leave the rink, you put it behind you.”

“We were off (in Game 5). Obviously myself, I was terrible,” Hoffman said. “Every mistake we made they scored on. They’re a team that can do that to you. It was a big bounce-back game for myself and everybody in here. Anytime you lose by a touchdown, it’s not nice, especially in hockey. It was definitely a big bounce-back game.

“[Monday] we had a meeting and that was the talk down here: We’re winning this hockey game no matter how or what. We were coming out here and we were going to win and we did that. This is a great group of guys in here. You have to have something special to make it this far in the playoffs. Everyone stepped up tonight.”

Evgeni Malkin scored and Matt Murray made 28 saves for the Penguins.

After Malkin gave the Penguins a 1-0 lead at 4:51 of the second period, the Senators ended an 0-for-29 streak on the power play to tie the game during a 5-on-3 advantage.

Ron Hainsey was called for interference at 11:45 and Ian Cole was penalized for high sticking Senators center Kyle Turris at 12:21. Bobby Ryan tied it 1-1 at 13:15 when he took a pass from Turris in the left circle and swept a shot past Murray on the stick side.

It was Ottawa’s first goal on Murray in 98:16 in the series. He won Games 4 and 5 after returning from an injury sustained before Game 1 of the first round.

Trevor Daley swept the puck into the net for Pittsburgh at 3:04 of the second during a scramble in the crease. But the Senators challenged for goalie interference and the goal was overturned upon review.

Hoffman took a pass from defenseman Fredrik Claesson on the left wing and scored with a slap shot that went in off the right post.

“I had a decent amount of time to corral it and pick my spot,” Hoffman said. “I guess I was just waiting for the guys to create some room so I was able to shoot through a screen and beat [Murray] on the far side.”

Anderson moved to his left to stop a quick shot off the rush by Sidney Crosby at 7:36 of the second period.\

Malkin fought off Senators forward Zack Smith along the end boards and spun out for a shot on goal. The Penguins center got his rebound and slipped a backhand behind Anderson.

The Senators were 3-for-3 on the penalty kill after allowing five power-play goals on 14 chances in the first five games of the series.

“We didn’t have much of a choice today. We wanted to make sure we got ourselves another chance of getting where we wanted to go. We told ourselves we were going to play the way we wanted to play, whether we won or not at least we had no regrets. We came out right from the start and played the right way. We played the way we have to play to be successful.” — Senators captain Erik Karlsson

“We played a good game. It happens sometimes in the playoffs. We’ve got to regroup but we did a lot of good things. We probably deserved better tonight.” — Penguins captain Sidney Crosby