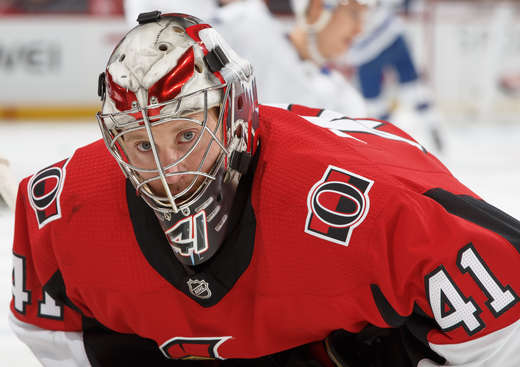 NHL.com Recap
OTTAWA — Yanni Gourde scored 14 seconds into overtime to give the Tampa Bay Lightning a 4-3 win against the Ottawa Senators at Canadian Tire Centre on Sunday.

Gourde got the rebound off Brayden Point’s initial shot and scored into an open net. A video review was initiated by the Situation Room for goaltender interference, but the call on the ice was upheld.

Point tied it 3-3 with 26.4 seconds remaining. With Louis Domingue pulled for the extra skater, Point scored a power-play goal on a one-timer off a pass from Tyler Johnson.

“It went from game over to three of their guys going the other way,” Lightning captain Steven Stamkos said. “That was a pretty amazing play under the situation. Obviously, it goes to [Johnson] and he makes a great play to [Point]. Game saver for us.”

“It’s unfortunate because we did do some really good things,” Senators forward Matt Duchene said. “We had a big game from [Anderson]. … The thing we’re having trouble with is putting it together for 60 (minutes) right now. That’s basically it. We’re right there. It’s not like we’re miles away. But at the same time, we’ve got to take advantage of games like that.”

“[Ottawa] earned that lead,” Lightning coach Jon Cooper said. “But I really thought our guys chipped away and it did not come easy, and they had to continue to work, obviously, all the way to the very end. But the group has showed that this year with us, and I thought they deserved the two points tonight.”

“I didn’t really have good bounces earlier on [in the season],” Joseph said. “[Cirelli] made a great play there and I was able to shoot it past the goalie. It obviously feels good after all the chances our line had. It’s good to be rewarded.”

Said Cooper, “You feel for the kid because who knows when you’re going to get your first. Obviously, it wears on you. It’s probably worn on him a little bit just because of the scoring chances their line has generated this year and they haven’t been rewarded. Tonight, they were finally rewarded.”

Ceci gave the Senators a 3-2 lead at 15:16, beating Domingue over the pad from the slot.

Ryan scored on a one-timer off a pass from Mark Stone in the left circle on the power play to make it 1-0 at 4:55 of the first period.

Lajoie extended the lead to 2-0 at 14:49 on the power play, receiving a cross-crease pass from Ryan Dzingel and beating Domingue glove side.

Cedric Paquette scored 38 seconds into the second period to cut it to 2-1, getting the loose puck in a scramble in front of the net and beating Anderson with a backhand.

It was the 2,000th NHL game for each team. Tampa Bay and Ottawa entered the League together for the 1992-93 season.

They said it
“It’s funny how the game works. If you take it away and you say ‘OK, Tampa won 4-3,’ in my mind, probably the way the game should’ve went. It’s how it ended up that way that’s probably the part that you’re like ‘oh my gosh.’ Pretty exciting way for it to happen.” — Lightning coach Jon Cooper

“It was just about, as a group, collectively, we had to take some ownership for our play and our results. It’s been a few too many years here for us where the players haven’t taken ownership. We were talking about it when the going was good at the beginning of the year and things were kind of buzzing a little bit and we had the positive energy and it’s easy to say all that nice stuff, but we’re going through a rough patch here and this is where it’s a true test of our personalities and a true test of the group that we have in here. It’s important to keep that same message. We’re not going to start bickering in here and pointing fingers, doing anything stupid like that because we’re going through a tough time. We’re going to get through it together here and we’re going to do our best to really own it.” — Senators defenseman Mark Borowiecki on the players holding a closed-door meeting after the game

Need to know
The Lightning outshot the Senators 37-12 over the final two periods and overtime. … Ottawa has allowed at least four goals in six of its past seven games.