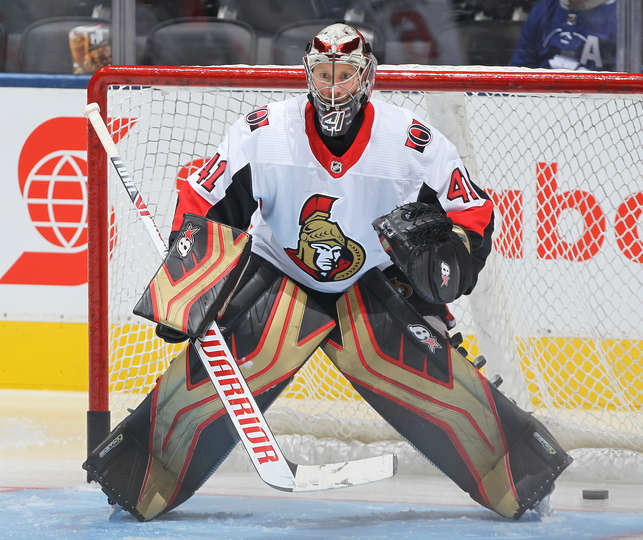 TORONTO — Thomas Chabot scored two goals and had an assist for the Ottawa Senators in a 5-3 win against the Toronto Maple Leafs at Scotiabank Arena on Saturday.

Chabot got past Maple Leafs defenseman Igor Ozhiganov at the blue line and shot over goalie Frederik Andersen’s blocker at 1:42 of the third period to give the Senators a 4-3 lead.

“As I got in the zone, I saw the defenseman kind of poke-check and open up his feet, so I knew I could try to squeeze it in between and go in on a breakaway, so I was pretty happy to squeeze in and put it in the back of the net,” Chabot said.

Mark Stone scored into an empty net with 25 seconds left to make it 5-3.

Dylan DeMelo and Chris Tierney each scored his first goal for the Senators since being acquired Sept. 13 from the San Jose Sharks in the Erik Karlsson trade. Craig Anderson made 34 saves for Ottawa, which lost 4-3 in overtime to the Chicago Blackhawks in its season opener Thursday.

“It’s nice to beat anybody at this point. I think just getting that first win of the season here is big for us,” Anderson said. “We’re doing a lot of good things, we’re making some mistakes, but we’re playing hard through them, and that’s all you can ask for.”

Morgan Rielly, Auston Matthews and Mitchell Marner scored for the Maple Leafs, who opened their season with a 3-2 overtime win against the Montreal Canadiens on Wednesday. Andersen made 19 saves.

“I thought we had a good game. I think we created some good opportunities to score and so did they, but they scored a little bit more,” Andersen said. “They got the most of their opportunities.”

Marner scored on the power play to tie it 3-3 at 18:20 of the second period. He skated past Ottawa defenseman Mark Borowiecki, faked a shot, and beat Anderson past his glove with the goalie sprawled.

Toronto tied it 1-1 29 seconds into the second period when Marner found Rielly with a cross-ice pass for a tap-in at the top of the crease. Matthews put the Maple Leafs up 2-1 at 1:10 after taking a pass from Patrick Marleau in the slot.

“I think things could have gotten a little sideways for us. We gave up two goals [on Toronto’s first two shots of the second], and that just takes the wind out of your sails,” Anderson said. “Looking up there having them be 2-for-2, from a goalie standpoint that doesn’t feel good, so I wanted to make sure I bounced back.”

Senators coach Guy Boucher said there was no panic on the bench despite quickly surrendering the lead.

“Very calm. We’ve talked about that many times, we don’t want to get riled up,” Boucher said. “There’s going to be emotional moments, but we definitely want our emotion to be under control. Anything that we don’t control, it has to be taken out of the equation really quick, and I thought our guys were super at that, and it helped us bounce back.”

The Senators tied it 2-2 at 3:49 of the second when Chabot scored on his own rebound after skating around Maple Leafs forward Tyler Ennis just inside the blue line.

Tierney gave Ottawa a 3-2 lead at 4:27 when he cut in on the left wing and shot between Andersen’s pads.

The Senators took a 1-0 lead at 9:42 of the first period when DeMelo scored from the top of the right face-off circle.

“Early there, they were coming pretty hard, and I think that goal settled us down a bit and got us back to our game,” DeMelo said. “Anytime you get a goal where you’re maybe not getting outplayed but the shot total is favoring them, I think it goes a long way for your confidence.”

They said it
“That’s got to be the identity of our team. We know we’re not going to go out there and bulldoze our way through because we have high-end power like [the Maple Leafs] do. We know that. So we approach our games as one game at a time. We came in here wanting to grow and we did.” — Senators coach Guy Boucher

“I think we played a much better game than we did opening night against Montreal. I think at times we really had them hemmed in and couldn’t capitalize on chances. We ended up making a small mistake, and they ended up capitalizing. Sometimes the little things make a big difference.” — Maple Leafs forward Auston Matthews

Need to know
It was Chabot’s second two-goal game in the NHL (April 2, 2018, against the Winnipeg Jets) and his third three-point game. … Marner led the Maple Leafs with six shots on goal.