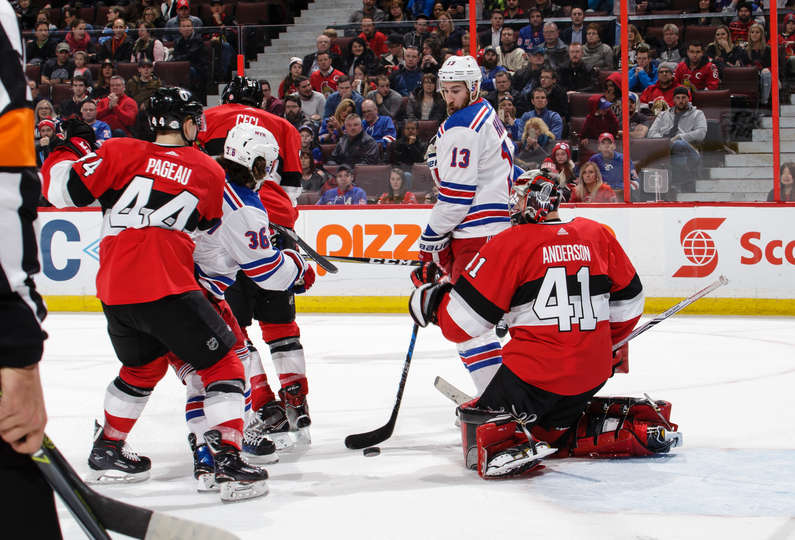 Nhl.com Game Recap
OTTAWA — Derick Brassard had a goal and two assists for the Ottawa Senators in a 6-3 win against the New York Rangers at Canadian Tire Centre on Saturday.

Matt Duchene, Mark Stone and Thomas Chabot each had a goal and an assist, and Craig Anderson made 32 saves for the Senators (21-27-9), who won their second straight game. Zack Smith and Cody Ceci each had two assists.

“You bring some different faces in and there’s different energy in the room,” Brassard said of the Senators, who acquired forwards Marian Gaborik and Nick Shore on Tuesday in a trade for defenseman Dion Phaneuf and forward Nate Thompson from the Los Angeles Kings. “I feel like we’ve been playing pretty much this way for a while.

“We don’t want to take some steps back. We want to keep pushing forward and try to improve as a team. Even if we’re not happy with where we’re at right now, I think we just have to keep pushing every game.”

Michael Grabner scored twice and Mika Zibanejad scored for the Rangers (27-27-5), who lost their third straight game and trail the New York Islanders by five points for the second wild card into the Stanley Cup Playoffs from the Eastern Conference.

Henrik Lundqvist allowed five goals on 27 shots and was replaced by Brandon Halverson in the third period. Halverson made five saves in his NHL debut.

“The first period, in general, we just didn’t win enough battles,” Rangers forward Rick Nash said. “I wish I had an answer for you guys because we talk about it before every single game, is to come out strong, keep it simple early, have a great start, and we’re just not performing good enough at the start of games.”

Brassard scored when he tipped a pass from defenseman Mark Borowiecki past Lundqvist to make it 4-2 at 18:53 of the second period.

The Senators took a 1-0 lead at 1:03 of the first period when Stone one-timed a pass from Brassard in the slot. Johnny Oduya made it 2-0 when he scored off a pass from Erik Karlsson in the left circle at 12:07.

“We’ve just got to really focus on that first shift next game,” Rangers defenseman Brady Skjei said. “The nice thing is we’ve got less than 24 hours to play another game, so we’ve got to put this one behind us and really focus on [the Philadelphia Flyers] and come out with a good team effort.”

Grabner made it 2-1 when he beat Anderson on the blocker side with a rebound at 16:01 of the first. Duchene deflected Ceci’s point shot to give Ottawa a 3-1 lead at 11:59 of the second period. The Rangers made it 3-2 when Zibanejad scored on a breakaway at 14:31.

Chabot made it 5-2 at 7:27 when his wraparound attempt went off Rangers defenseman Nick Holden into the net.

“It was a great game by everyone on the team, but on [defense] especially,” Chabot said. “When we look at guys like Ceci, had himself a really good night. [Borowiecki] was jumping in and using his speed. So, I think everyone was included and all the defensemen played a really good game.”

Grabner scored his second goal of the game with a wrist shot at 15:11 of the third period to make it 5-3. Magnus Paajarvi gave the Senators a 6-3 lead when he put a rebound past Halverson at 17:15.

Goal of the game
Stone’s goal at 1:03 of the first period.

Save of the game
Anderson’s save on Nash at 16:38 of the third period.

Highlight of the game
Chabot’s goal at 7:27 of the third period.

“You’d like him right away to feel comfortable, but that’s not the way life works. Right now, you see Duchene, outstanding. For us, that’s what we felt he would be at some point or another, and it’s been like that for a while now.” — Senators coach Guy Boucher