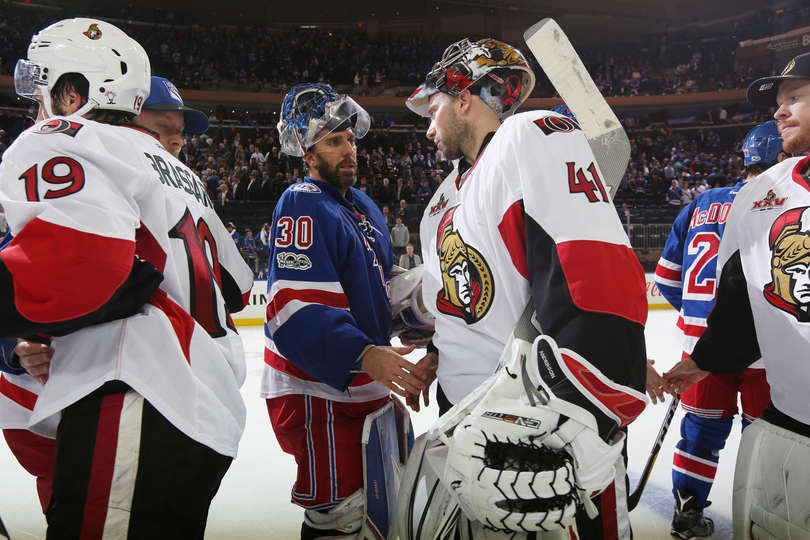 NEW YORK — Favorites or underdogs, the Ottawa Senators couldn’t care less what people think of their chances in the Eastern Conference Final.

What matters to the Senators is that they will be there following a 4-2 win against the New York Rangers in Game 6 of the Eastern Conference Second Round at Madison Square Garden on Tuesday.

“As long as we’re dogs and fighting in the ring there, at least we’re there,” Senators coach Guy Boucher said. “Over or underdog, let’s leave it at dogs.”

Mike Hoffman and Mark Stone scored in the first period, and Jean-Gabriel Pageau had an empty-net goal for Ottawa.

“It was a hard series,” Karlsson said. “I think we had to fight every game even though we weren’t playing the way we wanted in the third and fourth game. But again, it’s never easy, and they played a good game and they made it really hard for us, so credit to them. We have a long way to go here. We’re going to enjoy this for a little bit, and again, get back to work as soon as tomorrow.”

Mika Zibanejad and Chris Kreider scored, and Henrik Lundqvist made 22 saves for the Rangers, who were 0-for-4 on the power play.

“I think we played well enough to win a lot of games here,” Lundqvist said. “We talked about it during the season that sometimes it is not about playing your best game, it is about finding a way to win games. They did that better than we did.”

Zibanejad got the Rangers within a goal at 13:32 of the second period when he was sent in on a breakaway after a pass from Mats Zuccarello and beat Anderson with a wrist shot to make it 2-1, but Karlsson restored the two-goal lead at 3-1 2:21 later.

“We had a lot of chances that I think we let slip through our fingers,” Rangers center Derek Stepan said. “It’s a good team over there; don’t sell them short. They battled real hard, they played real strong games and they had that magic. Sometimes you’ve got to have a little bit of that.”

Kreider scored 53 seconds into the third period to make it 3-2. Zibanejad’s long pass got between Clarke MacArthur’s skates in the neutral zone and sent Kreider on a breakaway. He beat Anderson with a wrist shot for his third goal of the Stanley Cup Playoffs.

Pageau scored with seven seconds left to make it 4-2.

Hoffman scored 4:27 into the first period when he redirected Karlsson’s pass past Lundqvist to give the Senators a 1-0 lead. It was the first time in the series the Senators scored first.

Stone made it 2-0 when he sent a wrist shot from the left circle past Lundqvist at 14:44. It was his fourth of the playoffs. New York used its coach’s challenge to review whether Kyle Turris was offside prior to Stone’s goal, but the call on the ice was upheld.

Anderson made 13 saves in the first period.

Karlsson took a backhand pass from Bobby Ryan and beat Lundqvist from the left circle at 15:53 of the second period.

“It was big for momentum, the stadium erupted when they scored and I knew they would make another push after they scored,” Anderson said. “I think we took the wind right out of their sail with that great play between Bobby and [Karlsson]”

Anderson preserved Ottawa’s 3-2 lead when he denied Kreider on a 2-on-1 with Zibanejad by sliding across the crease to get his pad on Kreider’s quick redirection with 14:52 left in the third period.

Stone made a move around Rangers defenseman Brendan Smith, only to have Lundqvist poke the puck off his stick. Lundqvist, who was on his back, managed to keep Karlsson’s slap shot out of the net with his glove with 6:49 left in the first period.

Senators defenseman Marc Methot had two takeaways, two hits, one blocked shot and was plus-3 in 24:26 of ice time.

“It’s our guys. It was a group effort. We’re just battling hard. For me, it’s just another game. Just keep moving forward, keep your eyes forward, keep looking ahead where you want to go.” — Senators goalie Craig Anderson

“At the end of the day, the four games that we’ve lost in this series, it’s as simple as them making one more play defensively or one more play offensively. We were in all those games. Either we didn’t make the defensive play when we needed to or didn’t make the offensive play to bury them. Give them a lot of credit; they played well and they deserved to win.” — Rangers coach Alain Vigneault

Karlsson was plus-4 in 28:44. … Ottawa forward Viktor Stalberg left 5:59 into the second period with an undisclosed injury. … The last time the Senators were in the conference final in 2007, they defeated the Buffalo Sabres in five games. Ottawa lost to the Anaheim Ducks in the Cup Final in five. Ottawa also reached the conference final in 2003, when they lost to the New Jersey Devils in seven games. … The home team won the first five games of the series. … Lundqvist won 10 of the previous 11 home games when the Rangers faced elimination.