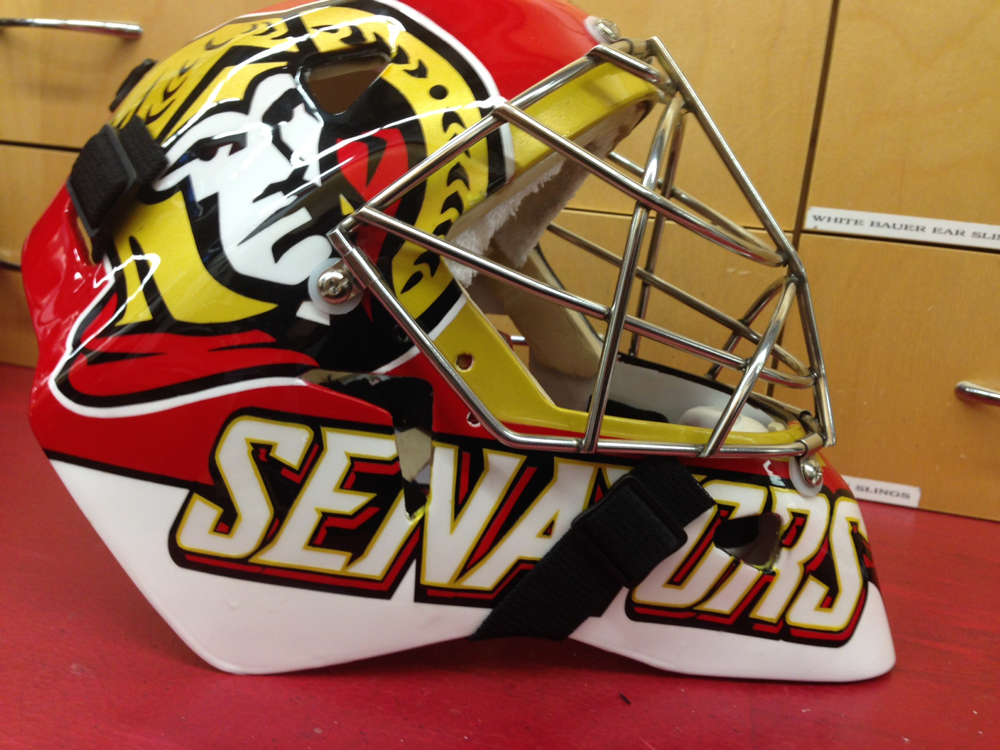 Great to be in front of #SensArmy tonight! Awesome games from @b_ryan9 and @ErikKarlsson65 got everyone fired up. Looking forward to Sat.

OTTAWA — The Ottawa Senators keep giving up all kinds of shots, so it’s a good thing they made the most of the ones they took.

Erik Karlsson and Jason Spezza each had a goal and two assists, and Ottawa won its home opener 5-2 against the New Jersey Devils on Thursday.

Bobby Ryan had a goal and an assist, and Craig Anderson made 40 saves for the Senators, who opened the season with a six-game road trip.

Zack Smith and Milan Michalek also scored for Ottawa, which won its second in a row (3-2-2).

The Senators were outshot for a sixth straight game, 43-22, but they beat Martin Brodeur on their first two shots to jump out to a 2-0 lead at 6:51 of the first period.

“We were really happy with getting that last win at Phoenix (4-3 in overtime Tuesday) and we wanted to carry over some of that momentum into tonight,” Anderson said. “With the energy the building brought us with the opening ceremonies, et cetera, we built off of that and we were able to come out flying.

“Any time you can get a two-goal lead to start the game, I’d rather have that than be down two and try to dig yourself out.”

Ottawa has allowed 295 shots in seven games, an average of more than 42 per game.

New Jersey extended its team record with a seventh straight loss (0-4-3) to open the season.

“No question it seems like a desperate time,” Devils center Ryan Carter said. “We’re seven games in, we haven’t found a way to get a win yet. You can’t look for excuses. You outshoot a team, I don’t know what it ended up today, but we’re in the 40s, they’re in the 20s and we’re on the wrong end of the scoreboard.”

New Jersey’s Travis Zajac scored 54 seconds into the third period to ruin Anderson’s shutout bid late in a lengthy 5-on-3 advantage that carried over from the second.

“He’s a good goalie,” Carter said. “Maybe a little puck luck here and there and a few go in, but he’s a big guy, he covered a lot of space, and we needed to find a way to get [shots] up. It felt like we were pounding it into the pad all night. It’s unfortunate.”

Anderson made a sprawling save to rob Jaromir Jagr moments after Zajac’s goal.

“It’s something we’ve seen [Anderson] do before,” Karlsson said. “He’s a great goalie and he comes up big for us when we need him, and obviously today he might have saved the game for us.”

Steve Bernier scored his first at 10:59 to draw the Devils within 3-2. Brodeur allowed four goals in his fourth start of the season.

“The bottom line is, you need to win hockey games, and regardless of who’s fault it is, we’re not getting it done as a team,” Brodeur said. “Some days it’s the offense, some days the defense, sometimes like today for me right from the get-go I need to make at least one of the two saves, even though I didn’t see them, find a way to stop them.

“We knew they were going to come out hard, and they got a lead 2-0, but after that we took our timeout and we dominated the game.”

New Jersey went 1-for-7 with the man-advantage. The Devils, who entered tied with the Senators for the fewest power-play opportunities this season (15), have converted 2 of 22.

Ottawa, which stopped a four-game skid with the overtime win against the Coyotes, went 0-for-3 on the power play.

Karlsson stepped up to drive a slap shot from the right side past Brodeur at 4:32. Ryan, who made his home debut for Ottawa, set up Karlsson after keeping the puck in the Devils zone.

Ryan later took Kyle Turris‘ backhand pass behind the net and came out to beat Brodeur with a sharp-angled shot from the left side for his fourth goal in five games.

“I don’t know how [Turris] ended up with the puck on the entry, but he did a good job,” Ryan said. “He drew two guys to him and then threw a pass in and behind, and I think the goalie and their [defensemen] thought the routine play there is to come out the other side and go low to high and establish something.

“He landed the pass perfectly, so all I did was turn my wrist over and threw it to where I knew it was going to be open.”

New Jersey outshot Ottawa 12-7 in the first period and 11-4 in the second, but Smith scored his second of the season at 18:41 of the middle period to increase the lead to 3-0 on the Senators’ 11th shot.

Michalek restored Ottawa’s two-goal lead at 4-2 with a drive past Brodeur 15:12 into the third. Spezza scored into an empty net at 18:14.

Forward Mattias Tedenby made his season debut after missing New Jersey’s first six games because of a lower-body injury.