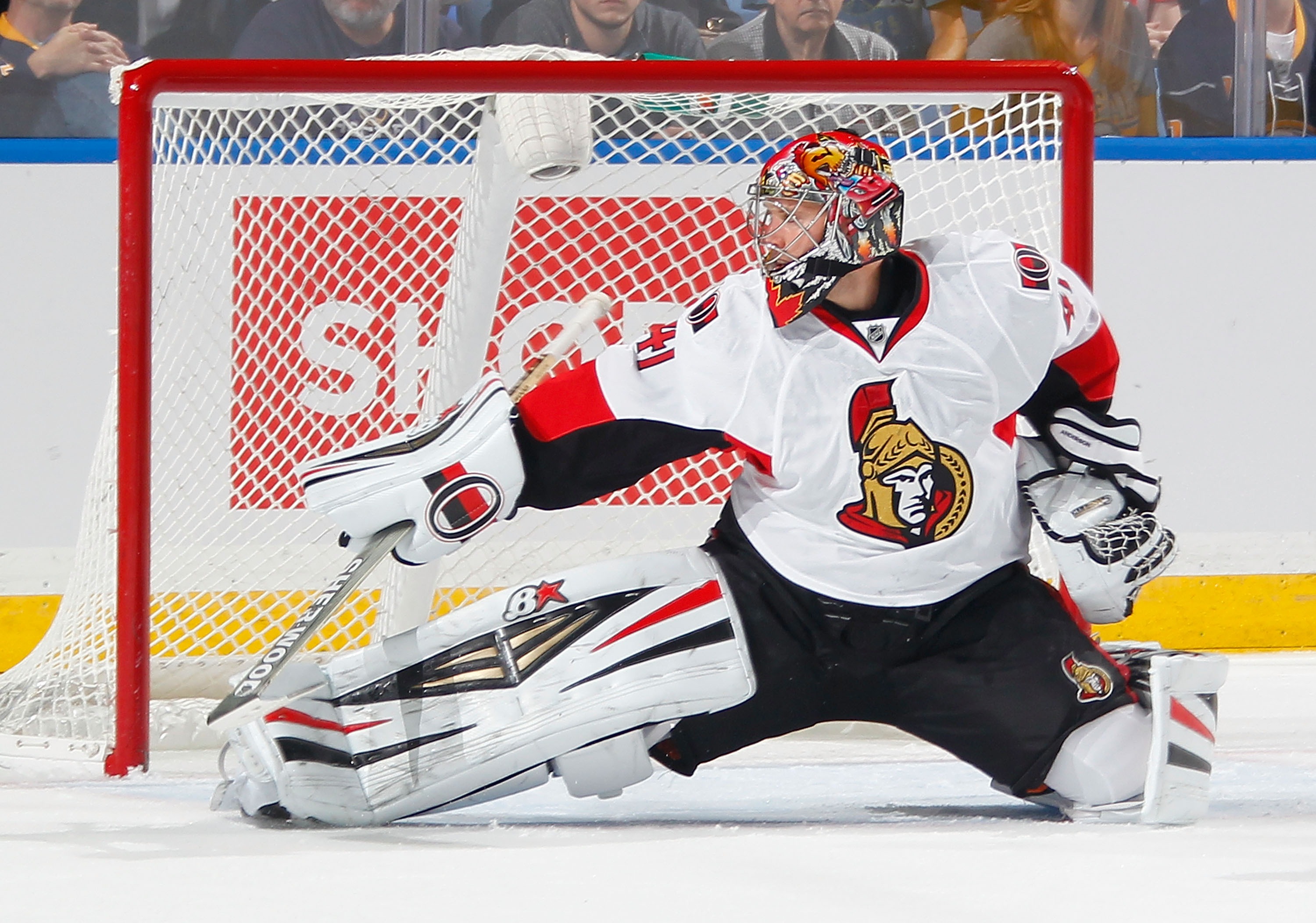 OTTAWA — It’s been a long time since the Ottawa Senators have been able to savor the momentum that comes from stringing together a pair of wins.

Mika Zibanejad, Kyle Turris and Clarke MacArthur scored goals, and Craig Anderson made 34 saves to lead Ottawa to a 3-1 victory against the Washington Capitals on Monday.

The win gave the Senators consecutive victories for the first time in seven weeks.

Zibanejad drew Ottawa even at 13:49 of the first period with his first goal in 13 games. Turris scored his third goal in the past five games at 3:14 of the second to give the Senators a 2-1 lead.

“We really wanted to win this game,” said Ottawa defenseman Erik Karlsson, who gave up a sure goal to set up MacArthur’s shot into an empty net with 35 seconds left in third. “They actually came out pretty hard in the first and they had us at the backs for a while, but I think we stuck to it and we were confident that if we just did the things we needed to do we were going to come out successful.”

The Senators, who defeated the Boston Bruins 4-3 on Saturday, won consecutive games for just the third time this season.

Ottawa’s most-recent winning streak was a season-high three-game run from Nov. 5-9. The Senators had failed to win the next game following a victory eight times in a row prior to Monday.

“Winning’s fun; losing’s not fun,” Anderson said. “When you’re losing, it’s not fun to be around the rink. When you’re winning, you’re excited to come to the rink, you’re excited to be around the guys and you want to get out there and keep getting better. It’s one of those things where it’s contagious; winning or losing is contagious, and it’s a lot better feeling in here to be winning and have that contagious atmosphere.”

Anderson, who got a glove on Eric Fehr’s shot from the slot with a little more than 2 minutes left in the third to preserve Ottawa’s lead, made several big stops during an offensive push by Washington late in the second period, beginning with a save on Mikhail Grabovski’s shot on a 2-on-1 and capped moments later when he denied Alex Ovechkin’s backhand as the Capitals captain drove the net.

“When you make the goalie hot, he’s going to play hot,” said Ovechkin, who leads the NHL with 30 goals but failed to record a point for a fourth straight game.

It is the longest Ovechkin has been held without a point since a four-game stretch from Nov. 12-19, 2011.

Capitals goalie Philipp Grubauer made 35 saves in his fourth straight start. The 22-year-old German rookie, who is 1-2-1 over that stretch, stopped 16 of 17 shots and five of six shootout attempts in a 2-1 loss to the Buffalo Sabres on Sunday.

“It was a very close game,” Washington coach Adam Oates said. “Second period, we had our chances to get a couple of goals and we didn’t, and then we gave them one and it was an uphill battle for the third period, and we just didn’t get it done. But there are things that are encouraging in the way we’re playing. They’re fighting for their points. They’re a good hockey team, and we’ve just got to figure out ways to play a little better every night.”

Senators right wing Chris Neil left the game after colliding with Ovechkin midway through the first period. Neil, who was favoring his left leg as he skated off the ice, sustained a lower-body injury and did not return.

“It doesn’t appear like it’s going to be day-to-day,” Senators coach Paul MacLean said. “It could be longer than that, but we’re going to re-evaluate it and see what it is.”

Neil, who leads Ottawa with 99 penalty minutes, has five goals and one assist in 42 games.

Ovechkin was upset about the hit.

“I saw him; I thought he was going to hit me shoulder-to-shoulder and I was ready, but he hit me right in the head, right at the chin,” Ovechkin said. “I asked the referee why he didn’t see it, and he said, ‘Ah, I didn’t see it.'”

Ottawa captain Jason Spezza and defenseman Chris Phillips, an alternate captain along with Neil, have sat out the past two games due to injuries. Spezza is day-to-day with a lower-body injury. Phillips has a left-foot injury.

Zibanejad, who has moved to center in Spezza’s absence, took a return pass from Cory Conacher on a 2-on-1 and steered the puck into a wide-open net for his ninth goal; it was his first since Dec. 1.

“I thought he was going to shoot it first, but then he kind of held onto it, so I put my stick down just in case, and I couldn’t have asked for a better pass than that,” Zibanejad said.

Senators right wing Eric Condra fired a shot off the right post in the opening minute of the second period.

Referee Jean Hebert put his right arm up to signal a delayed penalty on Capitals defenseman Mike Green, who hooked Turris as the Ottawa center drove the slot after receiving a pass from Ryan. Turris made the call a moot point when he deked around Grubauer to stuff a shot into a gaping net.

Ward scored with his back to the net to give Washington the early lead. The Capitals forward’s backhand along the ice from the slot found its way into the net inside the left post.

Anderson had a scare before his flurry of saves later in the second when he left his net to play Washington defenseman Karl Alzner’s dump-in along the glass. The puck struck a stanchion and hit the outside edge of the wide open net.

“It’s one of those things where sometimes you need a bit of luck on your side,” Anderson said. “The first goal was a bit unlucky. It was going wide, it hit my knob and kind of redirected into the net, so I guess I was due for some luck on my side for the rest of the game.”

Ottawa closes out its three-game homestand Thursday against the Winnipeg Jets. Washington returns home from its 0-1-1 road trip to face the Carolina Hurricanes on Thursday.