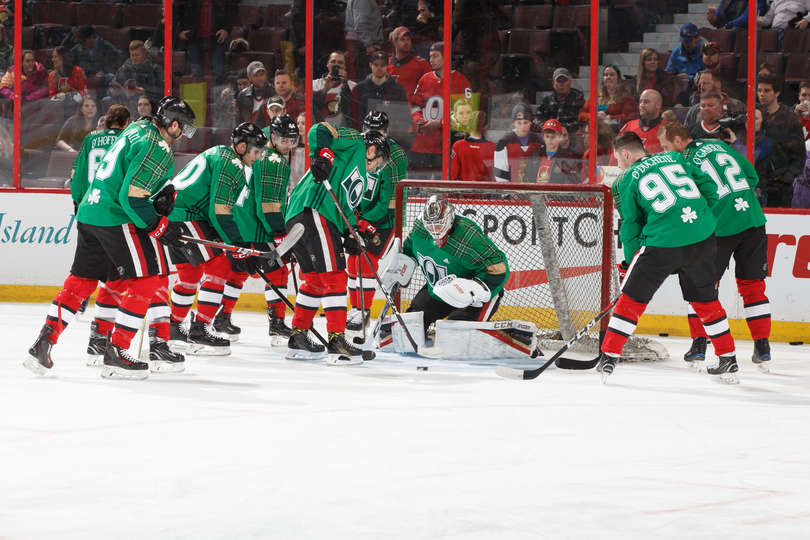 Nhl.com Recap
OTTAWA — The Dallas Stars lost their season-high fourth straight game when Mike Hoffman scored with 1:34 left in overtime to give the Ottawa Senators a 3-2 win at Canadian Tire Centre on Friday.

“Everyone’s tired,” Stars forward Tyler Pitlick said. “It’s the end of the year, it’s a long season, we’re on a long road trip. Everyone’s tired, but so is the whole league, and we’ve got to figure out how to come through and grind through it.”

“As soon as a guy makes a little mistake or there’s a little lost coverage, that creates openings,” Hoffman said of overtime. “It’s usually pretty offensive and run-and-gun, and fortunately we’ve been able to come out on top more than not.”

The Senators tied it 1-1 when Marian Gaborik one-timed a pass from Ryan Dzingel at the right face-off dot on the power play 2:20 into the third period.

Duchene gave Ottawa a 2-1 lead with 3:10 left when he took a pass from Erik Karlsson down low and shot high over Bishop’s glove.

But Pitlick scored off his own rebound as he was falling to tie it 2-2 with 1:48 remaining.

“It’s there for the taking,” said Bishop, who made 22 saves in his return to the Stars net after missing five games with a knee injury. “It’s about going out and doing it, not waiting until we have to get a goal or until we have to come back in the third. We’re getting leads; it’s about extending it now, instead of sitting on it and then waiting for them to take the lead, and then us turning it up a notch.”

“There isn’t any,” Stars coach Ken Hitchcock said when asked about his level of frustration. “This is a great point. To come back, and we’ve got nothing left in the tank and to keep pushing, this is a good point.”

“We’re showing what kind of team we really are in here,” Duchene said. “It’s too bad it’s too late in the season and we couldn’t have done this a little earlier in the year, but it wasn’t for a lack of trying. We want to go into the summer on a high note and we’re on our way.”

Tyler Seguin one-timed a pass from Jamie Benn in the slot on the power play at 10:36 of the first period to give the Stars a 1-0 lead. It was Seguin’s 38th goal of the season, a new NHL career high.

Ottawa is 17 points behind the New Jersey Devils for the second wild card from the Eastern Conference.

Goal of the game
Hoffman’s goal at 3:26 of overtime.

Save of the game
Anderson stopping Mattias Janmark at 16:06 of the third period.

Highlight of the game
Duchene’s goal at 16:50 of the third period.

They said it
“If we’re going to get into the playoffs, we’re going to have to come together at an incredible level and as a group. This is a test to see how deep we want to dig for each other and it’s a good test.” — Stars coach Ken Hitchcock on their frustration with the four-game losing streak (0-2-2)

“Doesn’t really matter, I can play with another stick. … He can hopefully give it to someone that wants it or he can keep it himself and play road hockey with it.” — Senators defenseman Erik Karlsson on Jamie Benn picking up his stick and bringing it to the Stars bench

Need to know
Bishop has not lost to the Senators in regulation in 13 games (9-0-4). … Hoffman tied Karlsson for second in Senators history with his sixth regular-season overtime goal; Mike Fisher had seven.