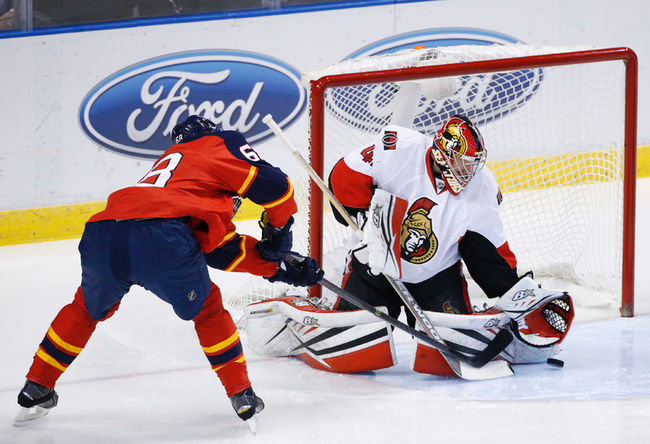 Recap:
SUNRISE, Fla. — Mike Hoffman continued his scoring touch Tuesday and his goal with 5:37 left broke a 2-2 tie and helped the Ottawa Senators defeat the Florida Panthers 4-2 at BB&T Center.

“It’s pretty nice,” Senators forward Bobby Ryan said. “He’s shooting the puck. The puck is finding him in the middle of the ice and he certainly knows how to deposit it.”

Hoffman, who entered play Tuesday tied for fourth in the NHL with 14 goals, scored from the slot with a wrist shot that went off the skate of Panthers defensemen Dmitry Kulikov after Kulikov had stopped a shot from the point.

“The puck managed to get to me in the slot and I just tried to get it away as quick as I can,” said Hoffman, who was robbed by Roberto Luongo in the first period when the Florida goalie made a blocker save while diving to the ice. “I didn’t really see where it ended up or where it went in. But it was good to get that one.”

Kyle Turris had a goal and an assist for the Senators (15-8-5), who have won three of four. Zack Smith had a goal and Mark Stone had three assists. Jean-Gabriel Pageau scored a short-handed empty-net goal with 2:31 left after Luongo was pulled for an extra attacker.

“I thought we definitely turned up our play in the third,” Smith said. “We took to them a bit more. We held on to pucks when we needed to and got pucks behind the ‘D’. We didn’t do that in the second. We made them skate and made them turn over pucks and were able to sustain a little bit of pressure.”

Craig Anderson, making his 12th consecutive start, made 25 saves. Anderson, who played with Florida from 2006-09, came with an 11-4-1 career record with a 2.08 goals-against average, a .938 save percentage and three shutouts against his former team.

Luongo made 19 saves. He moved into seventh place on the NHL’s all-time games played list by a goalie with his 887th game, breaking a tie with Tony Esposito. Luongo has lost his past three starts against Ottawa after winning the previous 10.

Jaromir Jagr was held without a goal for an eighth consecutive game and remained one goal behind Marcel Dionne for fourth place on the all-time list at 731.

“In the third, penalties just came back to haunt. We didn’t have the same jump. It’s disappointing.”

Florida (13-11-4) led 2-1 going into the third period, but Turris tied it 51 seconds in with Ottawa’s second power-play goal of the game. He shot into an open net after Ryan’s wrist shot bounced off Stone’s skate and slid across the front of the net.

Shaw, playing in his seventh NHL game, opened the scoring 7:49 into the first period. After Derek MacKenzie poked the puck past a pinching Ottawa defenseman, Shaw beat Anderson on a 2-on-1 with a slap shot high to the glove side.

“Obviously it’s nice to score my first goal, but it would have been nicer if it would have come in a win,” Shaw said. “I looked over and saw [MacKenzie] driving the net, and I like that shot. If I could have made the pass, I would have.”

Smith tied the game 48 seconds into the second period with the first power-play goal allowed by Florida after 20 consecutive kills over seven games. Ottawa came in with the most productive power play on the road in the NHL and went 2-for-5.

“I’m not sure [the reason],” Hoffman said. “I don’t know, we move the puck around well. We seem to find our seams. Everyone knows kind of the plays and our routes, where to go. And then just getting shots to the net and pucks are finding the back.”

With Brandon Pirri in the penalty box for slashing, Smith finished off a pretty passing play by one-timing Stone’s feed from behind the net. Stone one-timed a pass from Turris to set up Smith in the left circle.

“I don’t know if I would have been ready if he didn’t tell me right before that power play that he was doing that play, (that) he was just going to one-touch it to me,” Smith said. “As soon as Turris had it, I was ready to shoot it. It came pretty quick. I’m not saying I was trying to shoot on the ice there; I was probably trying to go a little higher on the far side. But I just got it on net and was able to squeak her in.”

Reilly Smith gave Florida a 2-1 lead at 13:58 of the second by beating Anderson on a breakaway. After taking a feed from Vincent Trocheck in the neutral zone, Smith made a deke to his backhand before flipping the puck high to the glove side.

Ottawa almost tied the game in the final 10 seconds of the period on a rebound from close range by Pageau, but Luongo stopped the puck with his arm while sprawled on the ice.

“It’s nice to bounce back from a loss [against the New York Rangers Sunday] night,” Zack Smith said. “We needed that one. These road trips are important. We play a lot of games this month and we want to make sure we’re ready to go every night.”