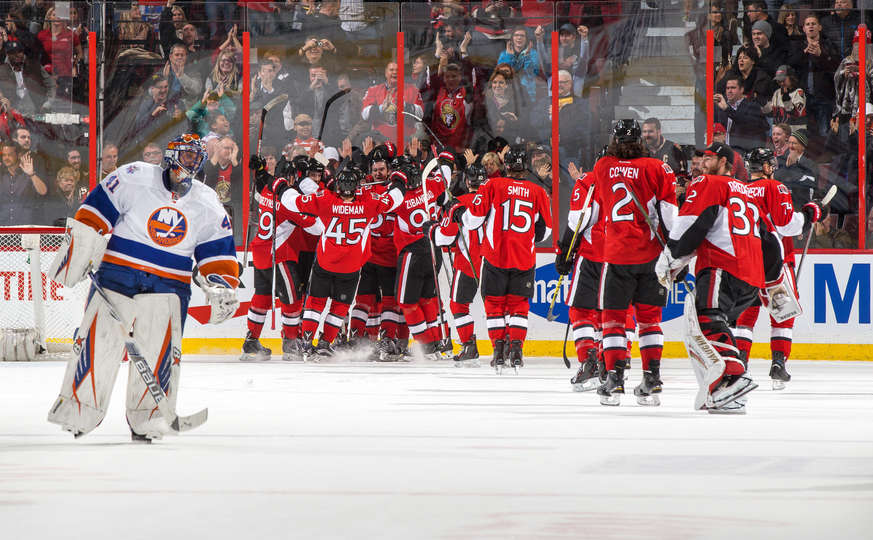 Recap:
OTTAWA — Erik Karlsson scored 3:34 into overtime to help the Ottawa Senators rally for a 3-2 victory against the New York Islanders at Canadian Tire Centre on Saturday.

Karlsson had two assists, including Mike Hoffman’s tying goal with 36.2 seconds left in the third period. Mark Stone had a goal and Craig Anderson made 29 saves for the Senators (14-7-5).

After the game, Karlsson was asked if it was a case of the Senators winning ugly.

“I’d say so,” he said. “This was a good one for us, I think we felt good. We didn’t get the opportunities I think everyone felt we deserved, but we stuck with it and made a few small changes at the end of the game that got us the two points.”

Matt Martin and Josh Bailey scored for the Islanders (15-8-5), who saw their four-game win streak end. Jaroslav Halak made 26 saves for New York, which extended its point streak to seven games (5-0-2).

The Senators trailed 2-0 in the third period after Bailey’s goal at 7:02 of the period.

Stone scored his seventh of the season at 8:58 to make it 2-1 when he took a pass from Karlsson and shot the puck through a screen set up by forward Mika Zibanejad. Hoffman tied it with his 10th goal in nine games, a wrist shot to the top corner on the stick side.

Senators coach Dave Cameron said he liked the way his players dug in at the end.

“I’m really proud of them. They stayed with it,” Cameron said. “(I) thought we had a good first period, stumbled a bit in the second, mainly because we refused to get the puck to the net, tried to stickhandle it into the net; found a way to tie it late. Then the guy on our team who hates 3-on-3 the most enjoyed it tonight.”

The Islanders were playing their fourth game on a back-to-back this season and were coming off a 2-1 win against the St. Louis Blues on Friday.

Islanders coach Jack Capuano credited the Senators for the rally.

“There’s a lot of things that happen in a game. You can’t fault [the Islanders] for their effort,” he said. “The way it unfolded at the end, it had nothing to do with their work ethic or structure. [The Senators] got the bounces that they needed.

“I give [the Senators] credit. They played hard. It was a good hockey game. The way that we started with the game [Friday] night, I didn’t know if we were going to have the legs that we had, but you could see by the shot clock the way that we were moving the puck around. We had some great chances too. We could have had a three-goal lead a couple times. Anderson played big for them.”

“Certainly you’re going for the two and you want four points on the weekend,” Hamonic said. “Granted, the situation is what it is, so we’ll take the point tonight certainly, but it’s nothing to be happy about or satisfied about.

“The frustrating part is we gave up that two-goal lead. That’s something we have to address. As of late, we’ve been really good in these games so it’s not like it’s a huge issue for us. You never want that to happen or creep back into your game. It’s probably just bearing down and continuing our program. When they get that first one, not get our heels a little bit and try to keep going.”

The Senators handed the Islanders the first goal of the game at 1:49 of the first period.

The play started with Anderson sending the puck up the boards and onto Martin’s stick. His shot from the edge of the circle deflected off the stick and then the leg of Senators defenseman Mark Borowiecki before going into the net.

Martin was credited with his second goal of the season.

No goals were scored in the second period despite each team having some good chances. The Senators’ best opportunity came four minutes into the period when Hoffman broke down the right wing and found open ice in front of Halak, who denied his shot from the slot.

The Islanders outshot the Senators 14-9 in the second period.

Senators center Kyle Turris left the game with 1:50 remaining in the third period, favoring his right leg after getting tangled up with Islanders center Casey Cizikas.

An X-ray on Turris’ leg was negative, according to the Senators. Ottawa plays at the New York Rangers on Sunday.

When asked for an update, Cameron replied, “I’m scared to ask.”

“I didn’t hear an update really, but I heard it’s not as bad as the first thought,” he said. “Hopefully it’s all good. He’s a good player on our team and we need him back as soon as possible.”