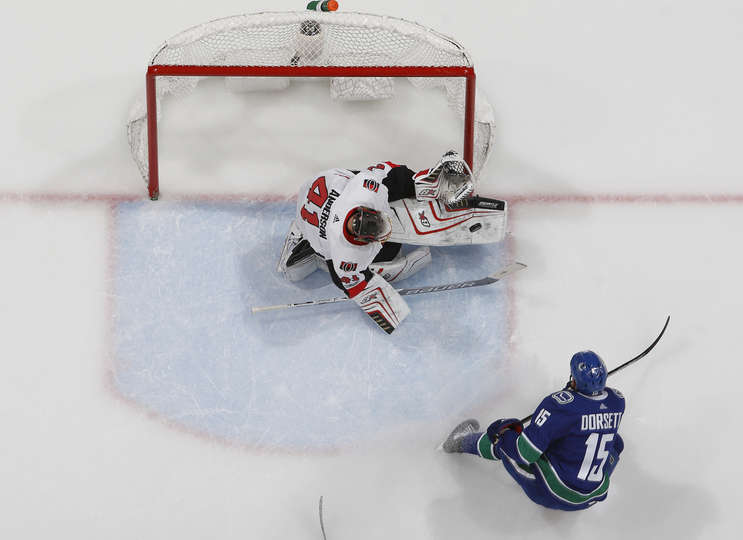 VANCOUVER — Ottawa Senators forward Mark Stone was playing close attention to Vancouver Canucks goalie Jacob Markstrom early in the shootout, and it paid off in the fifth round.

Kyle Turris kept the shootout alive in the third round with a blocker side wrist shot, and Stone scored with a lower shot on the same side two rounds later to help the Senators to a 3-2 win at Rogers Arena on Tuesday.

“You watch Bobby (Ryan) come in on the first shootout and (Markstrom) drops that right leg, and then Turris goes in there and makes a great shot and he drops the leg again, so I said ‘may as well go and see if he is going to drop it a third time,’ and fortunately he did,” Stone said.

Stone put his wrist shot just over that dropped right pad to give the Senators their first win after losing their first two games of the season in shootouts.

Cody Ceci and Ryan Dzingel scored, and Craig Anderson made 26 saves, then stopped four of five in the shootout for the Senators (1-0-2). Markus Granlund scored in the first round for the Canucks.

“Eventually you’re going to win one of those shootouts; it’s just a matter of statistics,” Anderson said. “Another resilient effort.”

“We could have won all three games, that’s why going into that shootout we needed something positive,” Boucher said. “We’re a character team, we proved it all last year and again today, our players stay poised through adversity.”

Christopher Tanev and Thomas Vanek scored, Henrik Sedin had two assists, and Markstrom made 40 saves for the Canucks (1-0-1).

“We are going 2-1 into the third (and) you want to get those two points,” said Tanev, who hit the post 30 seconds into overtime. “They are big down the stretch of the season. We’ll take the one. We’ll learn and move on.”

Ceci made it 1-0 on Ottawa’s second shot 4:08 into the first period with a shot from outside the right hash marks that snuck between the glove and body of Markstrom and tricked in.

“The first one was a real soft goal,” Markstrom said. “My mistake. It was tough against a team like Ottawa when you know it’s going to be tight you don’t want to give them free goals. The guys battled back really hard for me.”

Tanev tied it 1-1 at 7:03 with a point shot through a Vanek screen, and Vanek scored his first goal with the Canucks on a screen shot at 14:28 of the second period to make it 2-1.

Ryan got a pass along the right boards and fired a perfect cross-ice pass through traffic to Dzingel streaking towards the back post.

With 30 seconds left in overtime, Canucks forward Sven Baertschi had a breakaway but Anderson closed his pads in time to stop the low wrist shot.

Trailing 1-0, the Canucks turned over the puck deep in their own end to create a 2-on-0 in front of their net 5:48 into the first period, but Markstrom stretched out to his left after a cross-crease pass from Tom Pyatt and made a fully extended glove save on a one-timer by Alexandre Burrows.
They said it

“It reminded me of a lot of great (memories) I had playing for this team and living in this city. It’s always going to have a special place in my heart, that’s for sure. It was nice to be back and see the fans’ reaction. They’ve always been behind me through the ups and downs. I owe them a lot.” — Senators forward Alexandre Burrows on the in-game video tribute during his first game back in Vancouver, where he played 12 seasons

“They play that 1-3-1 trap and they are very good at it. It turned us over a few times, more than we liked, and they counter really quick. You can tell why they are such a good team.” — Canucks defenseman Christopher Tanev on being outshot 42-26

Ottawa was 0-for-4 on the power play and is 0-for-16 this season. … Karlsson and Oduya are skating and could rejoin the team before the three-game road trip ends on Sunday. … Canucks rookie right wing Brock Boeser, who led the team with seven points (four goals, three assists) in preseason, was a healthy scratch for a second straight game.