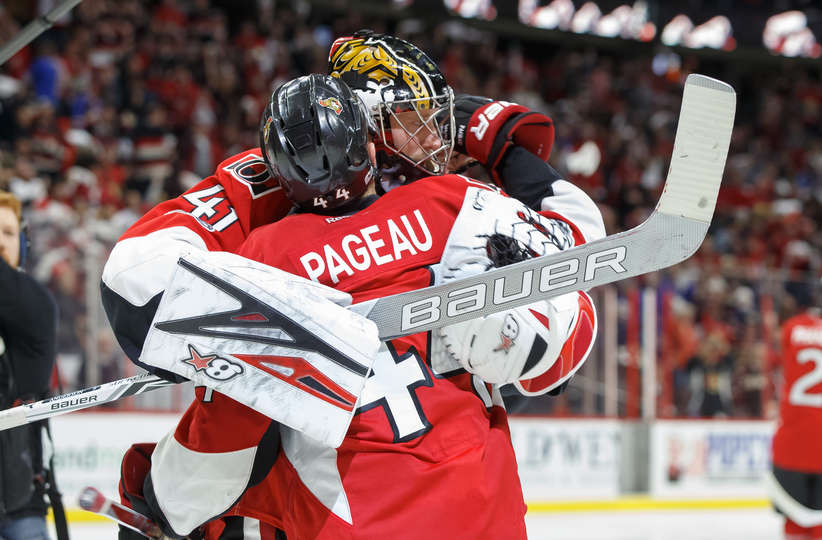 OTTAWA — The Ottawa Senators call forward Jean-Gabriel Pageau “the honey badger” because, as coach Guy Boucher said, he’s fearless and he’ll take on anything like the little animal. Apparently, that includes the New York Rangers in the Stanley Cup Playoffs.

Pageau, the smallest player in the Senators lineup (5-foot-10, 180 pounds), scored four goals, including the winner 2:54 into the second overtime, to lift Ottawa to a 6-5 victory against New York in Game 2 of the Eastern Conference Second Round at Canadian Tire Centre on Saturday.

Pageau also scored twice on a deflection in the final 3:19 of the third period, including at 6-on-5 with 1:02 remaining to tie the game 5-5. The tying goal completed his second career hat trick in the NHL playoffs. His first was May 5, 2013, against the Montreal Canadiens.

The Senators, who lead the best-of-7 series 2-0 with Game 3 at New York on Tuesday, also got goals from Mark Stone and Marc Methot. Craig Anderson made 43 saves.

Defenseman Brady Skjei scored twice, Chris Kreider had a goal, and Michael Grabner and Derek Stepan each scored shorthanded for the Rangers. Henrik Lundqvist made 28 saves.

“[Pageau] was good tonight, he made some good plays,” Lundqvist said. “But I wasn’t good enough. I needed to make the extra save there at the end. That’s my job.”

New York led 4-2 entering the third period after the teams combined for four goals in 5:12 in the second.

Pageau, though, said the Senators never felt like they were out if it. They also came back after trailing by two goals in the third period in Game 2 against the Boston Bruins in the first round before winning it in overtime on a goal from defenseman Dion Phaneuf.

“It’s easy in the room to get that energy when you have leaders like [captain Erik Karlsson], like our goalie who makes huge saves,” Pageau said. “It’s easy to get it going in the room and come back, and that shows a lot of character. I think we had faith in between periods that we were going to come back and we did.”

Methot scored 50 seconds after Stepan to get the Senators within 3-2, but the Rangers regained their two-goal lead on Skjei’s first of the game at 15:51.

“When you ask players who they want to play with, the No. 1 name that always comes is Pageau,” Boucher said. “It doesn’t matter if it’s an offensive player, defensive player, that’s always a name that comes up. Today is just one [more reason] why you know everybody wants to play with this guy.”

Pageau’s double-overtime goal came off of a 2-on-1 rush set up by Alexandre Burrows, who chipped the puck out and down the left-wing wall. Pageau had Tommy Wingels on his right with Marc Staal back for New York. He kept the puck and scored on a high, glove-side shot from the left faceoff circle.

It goes down on the play-by-play sheet as a block, but the Rangers would have won the game in the first OT had it not been for Kyle Turris getting his stick in the way of Rick Nash’s shot at 8:47 with Anderson out of the net.

Before Skjei scored his second goal, he broke up a 3-on-1 for Ottawa by blocking Stone’s pass to Turris. The puck came to his defense partner, Brendan Smith. Skjei joined the rush, got the pass, made a quick move to the top of the left hash marks, and beat Anderson with a wrist shot.

Senators defenseman Ben Harpur played 20:45 and was on the ice for two of Ottawa’s goals and none of New York’s. Boucher continued to play the rookie in overtime. Harpur got 5:54 of ice time in the first overtime and one shift on a defensive-zone start in the second overtime.

“It is a special moment. I’ll remember that, I think, for the rest of my life, for sure, but I want to stop there now. I really want to try to turn the page as quick as possible and focus on the next game.” — Senators forward Jean-Gabriel Pageau

“Understand that it’s still a race to four. You can lose two games in a row in a race to four. As long as you don’t lose the fourth one, you’re still in the series. The big key now is we’ve got to take care of business at home.” — Rangers center Derek Stepan

Pageau is the second player in NHL history to score his fourth goal in overtime of a playoff game. Anaheim Ducks forward Joffrey Lupul did it against the Colorado Avalanche in Game 3 of the 2006 Western Conference Semifinals. Senators forward Clarke MacArthur didn’t return after playing his second shift of the second period. Boucher said MacArthur aggravated an upper-body injury he sustained in Game 1 and is day to day. … Staal played in his 100th career NHL postseason game, all with the Rangers.