Anderson notched his first victory in almost two months Friday with a workmanlike 33-save performance to lead Ottawa to a 2-0 win against the New Jersey Devils at Prudential Center. The Senators got second-period goals from rookie Jean-Gabriel Pageau and veteran Milan Michalek.

“Our goalie was big part of the game, as was our penalty kill, and we found a way to win the game,” Ottawa coach Paul MacLean said. “The Devils probably played better than we did and probably deserved a better fate. But we’ve been there before where the stat sheet looked good for us but the scoreboard wasn’t … so we’ll take it.”

Anderson, who entered with the highest save percentage and lowest goals-against average in the NHL, recorded his first shutout in nine career appearances against the Devils. The 31-year-old missed 18 games with an ankle injury before losing back-to-back games against the Florida Panthers on April 7 and Tampa Bay Lightning two days later.

The fact his shutout came opposite Devils goalie Martin Brodeur made the triumph that much more special.

The victory gives the Senators a two-point lead over the New York Islanders for sixth place in the Eastern Conference with seven games remaining. After a visit to TD Garden to face the Boston Bruins on Monday, Ottawa will play five of its last six regular-season games at Scotiabank Place.

The Devils lost for the ninth straight time, the same number of games the team has been without injured right wing Ilya Kovalchuk (shoulder). New Jersey, which will visit Air Canada Centre to play the Toronto Maple Leafs on Monday, could equal the team record of 10 straight losses set Oct. 14 to Nov. 4, 1983.

With seven games remaining, the defending Eastern Conference champion Devils are in 10th place with 15 wins and 40 points.

“If there’s a blame to go around, it should go to the coaches,” Devils coach Pete DeBoer said. “We’ve got to find a way to give these guys some tools and find a way to win some games.”

DeBoer pulled Brodeur with 2:12 left in the third period, but Ottawa bottled up the middle of the ice to secure Anderson’s third shutout of the season. New Jersey finished with a 33-11 advantage in shots, but went 0-for-4 on the power play and has been held without a goal in its past 15 chances with the man advantage, including three 5-on-3 opportunities.

The Devils have outshot their opponent in 20 of the past 22 games. The 11 shots given up Friday, including two in the third period, were the fewest allowed by any team this season. But New Jersey fell to 3-15-6 when giving up the first goal of game.

“Defensively, it was probably one of the most boring games I’ve had in a long time and that means we played pretty solid,” Brodeur said. “The guys, offensively, are getting chances, they’re getting shots, they’re getting looks, but nothing’s going in. I’m really disappointed with the result. What’s not disappointing is the effort and the way we’ve been playing.” 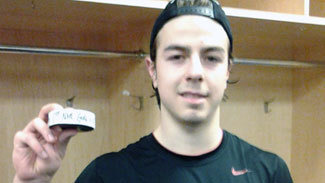 It was Anderson’s first win since a 38-save, 3-1 victory against the Islanders on Feb. 19. Anderson, the game’s first star, improved to 6-2-1 against New Jersey.

“We got two points and that’s all that matters,” Anderson said. “I feel 33 shots isn’t a lot of work … that’s pretty average for us. So I think the guys did a great job of cleaning up rebounds in front. It felt like I was leaving a lot of junk out there, but the battle level in front of the net was outstanding in getting to the loose pucks.”

The Senators opened a 2-0 lead early in the second on the goals by Pageau and Michalek in a span of 3:44.

Pageau, who was called up from the team’s American Hockey League affiliate in Binghamton on Wednesday, scored his first NHL goal on a perfectly timed tip in front of Brodeur at the 3:08 mark. Colin Greening took a feed from Erik Condra in the right circle and drove a high backhand attempt Pageau deflected with his stick from waist high.

“For sure, that goal is going to stay in my memory for all my life,” Pageau said. “Marty Brodeur is great goalie. He’s a legend, and to score my first one against him, for sure, I’m going to remember for a long time.”

Senators captain Daniel Alfredsson has liked what he’s seen from Pageau, who has one goal and one assist in his two NHL games.

“To score that first one against Marty is a memory he’ll always have,” Alfredsson said. “When he tells his kids, they’re not going to even know who Marty Brodeur is, but it’s great and he’s one of the best goalies ever, if not the best.”

Michalek, who had missed the previous 15 games with a knee injury, made it 2-0 when he broke in 2-on-0 with Alfredsson and started a give-and-go before depositing his third of the season past a sliding Brodeur from the left circle at 6:52. Devils defensemen Henrik Tallinder and Marek Zidlicky bumped into one another at the Senators blue line following an offensive-zone faceoff win by Travis Zajac.

“It was great to have him back in the lineup because he brings experience, skill and work ethic,” Alfredsson said of Michalek. “We certainly welcome all those things, so it’s a big addition to us and he obviously scored a big goal.”

Anderson kept keep his team ahead by two when he denied Ryan Carter off a 2-on-1 with Stephen Gionta on a quick right-pad save with less than 10 minutes remaining in the second period.

The Devils missed a golden opportunity to grab the lead in the first but failed on three power-play opportunities, including a 5-on-3 advantage for 1:24. New Jersey misfired on another power-play attempt at 13:20.