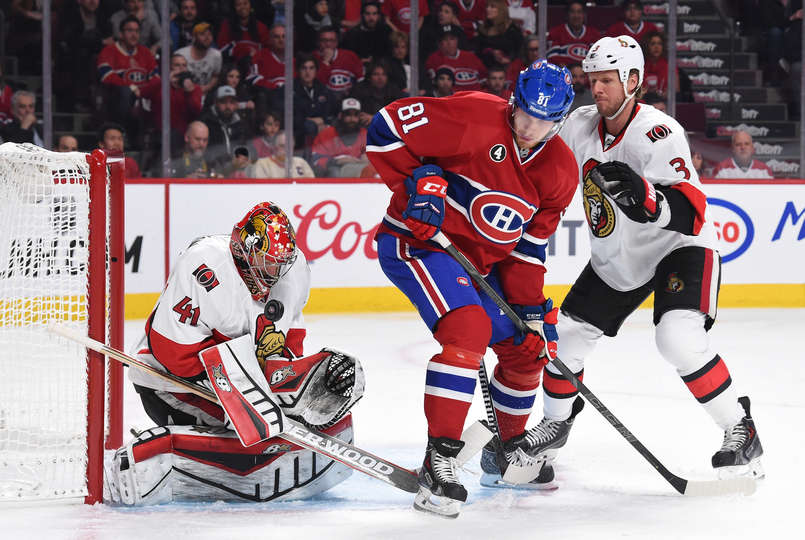 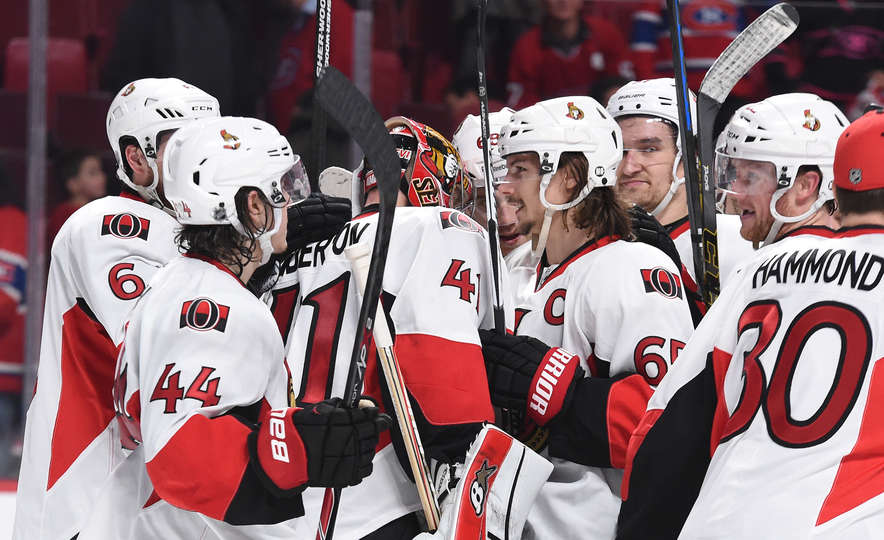 MONTREAL — The Ottawa Senators are halfway to another dramatic comeback.

Craig Anderson stopped 45 of 46 shots, and Bobby Ryan and Patrick Wiercioch scored first-period goals to help Ottawa defeat the Montreal Canadiens 5-1 in Game 5 of the Eastern Conference First Round at Bell Centre on Friday.

Erik Karlsson and Mike Hoffman scored power-play goals, and Erik Condra scored for the Senators, who won their second straight elimination game and trail the Canadiens 3-2 in the best-of-7 series.

“It’s still a long road to go,” Anderson said. “We have to continue to work hard and be ready for the next one. We’ve been very fortunate that we’ve been able to come back and win the next two, and we’re really looking forward to getting there Sunday and trying to win another one.”

“We’re taking it one game at a time, which we have for a long time now, and all we’re worrying about is Game 6,” Karlsson said. “We have to win that one to even survive and we’re not even worrying about Game 7 right now. We’ve got to come into our building and we know they’re going to come out hard like they did [Friday] and they’re going to play well.

“They’re a good team and we just have to keep doing the same things over and over again and keep improving a little bit more for every game that goes on, which I think we have throughout the series.”

Ottawa was 14 points out of a Stanley Cup Playoff position when it began a 23-4-4 season-ending run to qualify.

“At the end of the day, we’re up 3-2,” Montreal left wing Max Pacioretty said. “This is a good team we’re playing against. Nobody said it was going to be easy. They definitely have a lot of heart. They battled back from the [NHL Trade Deadline] and played some of the best hockey in the League. We were expecting them to play that well and their goalie is playing probably the best I’ve seen him play. We can’t focus on that. We’ve got to worry about winning one game and winning a series.”

Anderson, who defeated Montreal 1-0 in Game 4 on Wednesday, had his shutout streak end at 101:44 when Canadiens defenseman Tom Gilbert scored early in the third period to make it 3-1.

Anderson has stopped 120 of 123 shots in three starts since taking over from Andrew Hammond, who lost the first two games in Montreal after going 20-1-2 during the regular season.

“[Anderson has] been a real good goaltender in crucial games in the playoffs,” Ottawa coach Dave Cameron said. “I don’t know why anybody’s surprised. We didn’t expect anything less.”

Ryan got his first point of the series, his first goal in more than a month, with a shot from the left side at 9:29 of the first period.

“When you’re not scoring and you’re a guy relied on to bring offense, I don’t think there’s a harder position to be in,” Ryan said. “So to start [Friday], and hopefully it’s a domino effect moving forward, is a huge relief.”

Wiercioch scored his second goal unassisted at 15:39 to give the Senators the first lead of more than one goal in the series. Karlsson made it 3-0 with a power-play goal at 14:29 of the second period.

The Canadiens went 0-for-3 on the power play; they have one goal in 19 opportunities in the series.

“We did a lot of things well in the first part of the game,” Canadiens defenseman P.K. Subban said. “I don’t think we could have had a better start than the way we started. We put pucks on net. We had opportunities to score. You’ve got to give their goaltender credit. He made some big saves. I thought we did an OK job of taking his eyes away, but you have to do a great job of that to score in the playoffs, especially against great goaltenders.”

Montreal, which has allowed the first goal in every game, took the first seven shots before Ryan scored on the Senators’ second shot, using traffic in front of Price to grab the lead.

“I thought it was the difference in a lot of the goals,” Ryan said. “Carey’s going to stop everything he sees, he’s that good, and for us to create some traffic, put some bodies in front of him and just get him maybe outside of his comfort level is something that we needed to be successful, and I thought we did a good job of that [Friday].”

Ryan, who hadn’t scored in 16 games since March 19, put a shot between Price’s left arm and the left side of his body and the puck slid slowly behind him over the goal line.

Wiercioch was patient with the puck as bodies assembled in front of Price before beating him with a wrist shot to make it 2-0, his fourth point of the series.

Karlsson drove a slap shot past Price from the left point for his fourth point.

“We came out of the gate really hard,” Canadiens coach Michel Therrien said. “They took advantage of their opportunities. Anderson was really good.”

Montreal left wing Brandon Prust got minor penalties for roughing and cross-checking at 17:57 of the third period when he and Anderson got into a skirmish in the crease.

“It was just a battle of emotion there,” said Anderson, who was not penalized. “He was coming to the net hard and I’m trying to take my ice; a bit of stickwork, but no harm, no foul.”

Wiercioch got a roughing minor. Eric Gryba, his defense partner, and Subban were given misconduct penalties.

“There’s certainly frustration on their part, and at the end of the day a sure sign of frustration is when they’re taking cheap shots at your goaltender, who’s a real good player for us,” Cameron said.

Ottawa left wing Clarke MacArthur left the game in the second period with a lower-body injury. Senators center Jean-Gabriel Pageau limped to the bench after he blocked a Subban slap shot at 9:15 of the third; he remained on the bench and did not play another shift.