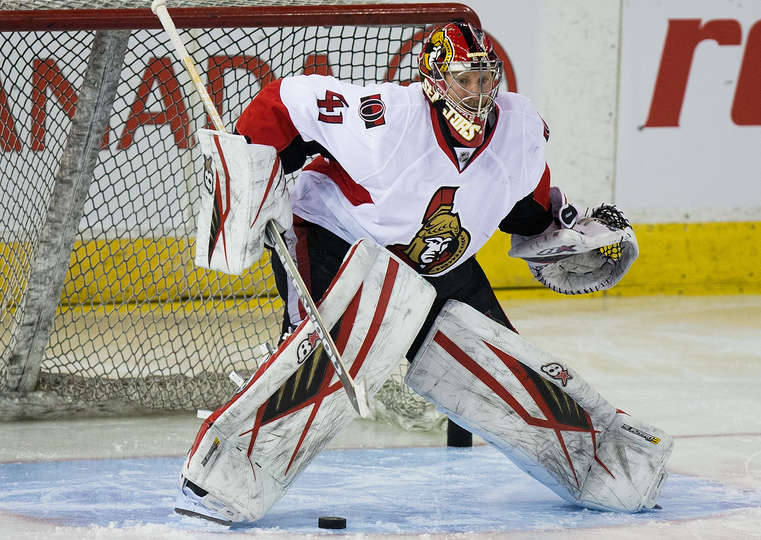 EDMONTON — The Ottawa Senators extended their winning streak to four games and avenged one of their most lopsided defeats of the season with a 4-1 victory against the Edmonton Oilers at Rexall Place on Tuesday.

Nick Paul, Zack Smith, Mark Stone and Alex Chiasson scored, and goaltender Craig Anderson made 31 saves for the Senators (29-26-6), who lost 7-2 to the Oilers at Canadian Tire Centre on Feb. 4.

“This was big for us. We were embarrassed in our own building and we weren’t happy about it,” Anderson said of Ottawa’s first game against Edmonton. “I think after that game we really had to look at ourselves and change a couple of things and make sure we were on the right page moving forward. This was another good team win where we played simple, solid defensive hockey and capitalized on our opportunities in the offensive zone.”

Coach Todd McLellan was extremely unhappy with his team’s performance.

“I wouldn’t put them all in that category, but there were some [players] that should be embarrassed when they leave,” McLellan said.

Paul gave the Senators a 1-0 lead with his first NHL goal at 12:50 of the first period. The rookie forward, playing in his fourth NHL game, lifted the rebound of defenseman Chris Wideman‘s shot past Talbot.

“It was awesome,” Paul said of his first goal. “I saw the shot come in and I saw the goalie come out and I was right at the side of the net with the open net and the puck just happened to slide right there and it was an easy tap-in. It was a great shift by the guys; we got pucks to the net and I was able to slide one in.”

Smith put Ottawa up 2-0 at 5:53 of the second period with a power-play goal. He took a cross-ice pass from Stone and was able to squeeze a shot through Talbot for his career-high 15th goal.

“Career highs are always nice,” Smith said. “I’m feeling comfortable in the slot with the puck right now and I’m playing with some very skilled guys, that if you get to the open spots, they’re going to get you the puck and give you a chance to score. We’ve done a good job of stringing some wins together here and we’re playing with a little more confidence.”

Eberle made it 2-1 at 18:14 when he got to a rebound in front and fired it past Anderson. The goal extended Eberle’s scoring streak to four games and was one of the few positives for Edmonton.

“We’re not happy with how it’s going.” Eberle said. “I thought early in the game, I didn’t think we were hard enough. I thought we were getting outmuscled, out battled and outcompeted to some pucks. I thought we had a bit of a push at the end of the second, and obviously, got that goal and almost had a couple of more the next shift. But we’re not happy, this is frustrating. We can’t be doing that, especially in our home rink.”

Chiasson scored at 3:31 of the third period to give Ottawa a 3-1 lead, converting a pass from Smith on a 2-on-1 rush.

Smith was able to collect a loose puck at center after Oilers defenseman Justin Schultz could not handle a pass from defense partner Jordan Oesterle. Smith lifted a pass over Oesterle to Chiasson, who hit the wide-open net for his fifth of the season.

Stone scored into an empty net with Talbot pulled for an extra attacker with 3:21 left in the third period.

“I’m really disappointed,” McLellan said. “It doesn’t get any easier. I am concerned about the spirit of our team. I think there are a lot of guys waiting for something. I don’t know if it is changes coming, them leaving, new guys coming in, that’s a dangerous, dangerous thing. I can’t justify any of the three goals we allowed tonight. The third goal broke our back. It broke our spirit, the way they got it and how easy it was.”

Edmonton plays at the Los Angeles Kings on Thursday in the first of a two-game Southern California trip.

The Senators, who are four points out of the second wild card into the Stanley Cup Playoffs from the Eastern Conference, play the second of a three-game Western Canada trip Thursday at the Vancouver Canucks.

“We want to keep this thing going, because we still have a lot of work to do,” center Curtis Lazar said. “Winning is fun and confidence can be a scary thing, but we can’t look to far ahead. The game against Vancouver is going to be big, and anytime the puck drops we have to be ready to go.”