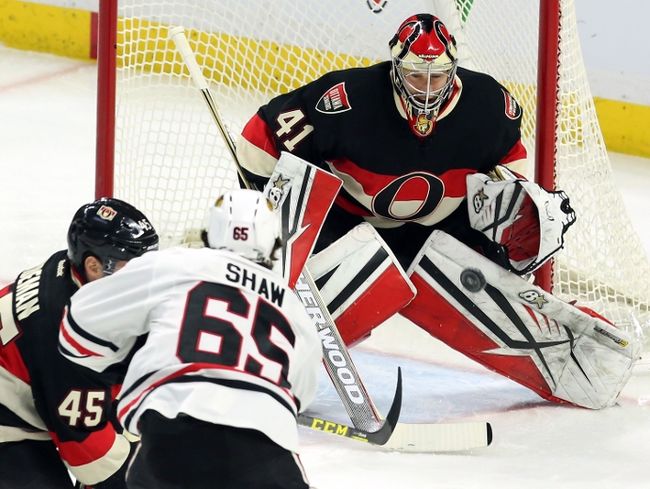 NHL.com Recap:
OTTAWA — Mike Hoffman scored 30 seconds into overtime to give the Ottawa Senators a 4-3 win against the Chicago Blackhawks at Canadian Tire Centre on Thursday.

Blackhawks forward Patrick Kane tied Bobby Hull’s franchise record 21-game point streak with a goal and two assists. The Blackhawks (13-9-4) have lost three in a row for the first time this season.

Kane has 13 goals and 22 assists during his streak, which started Oct. 17. He tied Hull’s record with a power-play goal in the second period, and assisted on goals by Artemi Panarin and Artem Anisimov.

Hoffman scored the winner when he took a pass from Senators defenseman Erik Karlsson, who outraced Kane to a loose puck along the boards in front of the benches, and put a shot just under the crossbar. It was Karlsson’s third assist of the game; he has five goals and 12 assists in his past 11 games.

Senators coach Dave Cameron said he didn’t catch any windburn from the race between Karlsson and Kane, but “my eyes watered.”

Hoffman hit the post to the right of Chicago goaltender Corey Crawford as time expired in the third period. Hoffman, who also scored the first goal of the game, has 13 goals, nine in his past eight games.

“You watch it, and you see it go off the post and up,” Hoffman said of his last-second chance in the third. “Late in the period, try to get it off, I didn’t know what the clock was at. I think I had Crawford beat, but not the net.

Bobby Ryan and Mark Stone scored for the Senators (13-7-5), who ended a two-game losing streak. Ryan had two assists.

Anisimov tied the game 3-3 at 12:34 of the third period, taking a clever pass from Kane, who started to circle behind the Ottawa net before slipping a backhand to Anisimov in front.

The Senators led 3-2 after Stone’s power-play goal at 3:54 of the third period.

Behind 2-0, the Blackhawks dominated the second period, getting goals from Kane and Panarin to tie the game.

Kane scored his 16th goal of the season at 2:20 of the second period with the Blackhawks on a 5-on-3 power play. Ottawa’s Marc Methot was penalized for closing his hand on the puck, and four seconds later, defenseman Jared Cowen was penalized for delay of game when his clearing attempt went into the crowd.

Panarin tied the game at 6:52 on a play seen frequently in the Ottawa zone this season. He took a drop pass from Kane near the left point and was free to skate into the middle of the ice and down the slot to score his eighth goal of the season.

“He’s a good player, he’s world-class,” Anderson said before adding in a joking manner, “I’m just glad I could help my fellow American try to win the scoring race.”

The Senators took a 2-0 first-period lead on goals by Hoffman and Ryan.

“It’s another example of a game where we had spurts where we controlled the game,” Blackhawks captain Jonathan Toews said. “We ended up giving a couple of weak power-play goals where we let the guy walk right in, giving up shots from the slot.

“It’s not fun to lose those games, especially when we’re playing pretty good hockey. It’s just little defensive letdowns that are costing us points the last little while.”