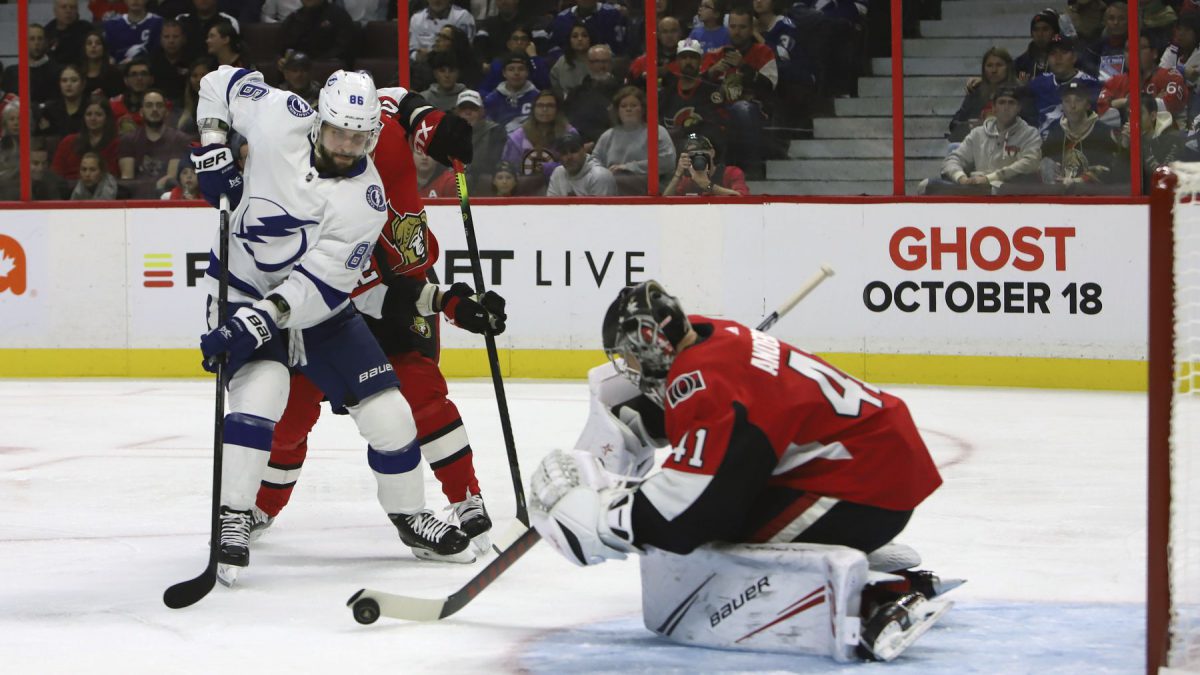 OTTAWA — Vladislav Namestnikov had two goals and an assist for the Ottawa Senators in their first win of the season, 4-2 against the Tampa Bay Lightning at Canadian Tire Centre on Saturday.

Namestnikov, who was acquired in a trade with the New York Rangers on Monday, made it 3-2 with 3:03 remaining in the third period when he finished 2-on-1 with Connor Brown. He scored into an empty net at 19:38 for the 4-2 final.

“Never fear an opponent,” said Namestnikov, who played for the Lightning from 2014-18. “You’ve got to go out and play your game, not think about who’s out there. I think that’s what we did today. We limited their chances and got rewarded.”

[WATCH: All Lightning vs. Senators highlights]

Jean-Gabriel Pageau had a goal and an assist, and Craig Anderson made 19 saves for the Senators (1-3-0).

“We had a lot of guys play hard today,” said Senators coach D.J. Smith, who got his first NHL win. “Right from the get go, I thought we played hard. We played hard defensively, played hard in the [offensive] zone. We’re doing a better job trying to limit shots and we had a lot of guys really play hard, especially Pageau with the old Gordie Howe hat trick tonight. You don’t see that much anymore.”

Ondrej Palat and Luke Witkowski scored, and Curtis McElhinney made 30 saves for the Lightning (2-2-1), who have lost three of their past four games.

“I don’t think it was for lack of effort,” Tampa Bay defenseman Ryan McDonagh said. “It was really just disjointed and really not understanding the situations and momentum swings of the game. I think that’s something we need to learn as a team. We go out and get in our groove and feel confident, but when it’s not there, you’ve got to simplify and you’ve got to be really good in your support.”

Colin White scored with a wrist shot short side from the right circle to give the Senators a 1-0 lead at 13:44 of the second period. Bobby Ryan had the secondary assist on the goal, his 300th in the NHL.

“Our goalie coach came up to me right before the game and told me to [shoot glove side on McElhinney],” White said. “So I was thinking that the whole way down.”

Pageau banked the puck off McElhinney’s skate into the net from below the goal line to give Ottawa a 2-1 lead with 27 seconds remaining in the second.

“We were driving the play against Toronto (7-3 win on Thursday), and today, Ottawa drove the play against us,” Lightning coach Jon Cooper said. “It’s a little disappointing. It’s not up to our standards, that’s for sure.”

Pageau scores from down low

Witkowski tied it 2-2 at 8:56 of the third period with a snap shot from the left circle that beat Anderson five-hole.

“I think, in certain instances, we came back,” Lightning forward Alex Killorn said. “That third period, it seemed like we might’ve had a chance there for a second, but it just seemed like through the whole game, it wasn’t a consistent enough effort. Through the game, we had some really good shifts, but it seemed like they outworked us in a lot of aspects.”

“We’ve just got to be better on top of that. It all starts from the offensive zone. A lot of those plays happen because we lose a guy in the offensive zone, we’re trying to get greedy or trying to score a goal. We have to realize that we have to take care of our own zone, and those opportunities will come.” — Lightning forward Alex Killorn on the odd-man rushes that led to two goals by the Senators

“It’s way more calm here in Ottawa. I can park my car and not have to walk everywhere, so it’s good. It’s more relaxing and I’m enjoying every second of it.” — Senators forward Vladislav Namestnikov on his first week with Ottawa

Senators forward Artem Anisimov sustained a lower-body injury and did not play the third period. Smith said the injury isn’t serious and Anisimov could play Monday against the Minnesota Wild.