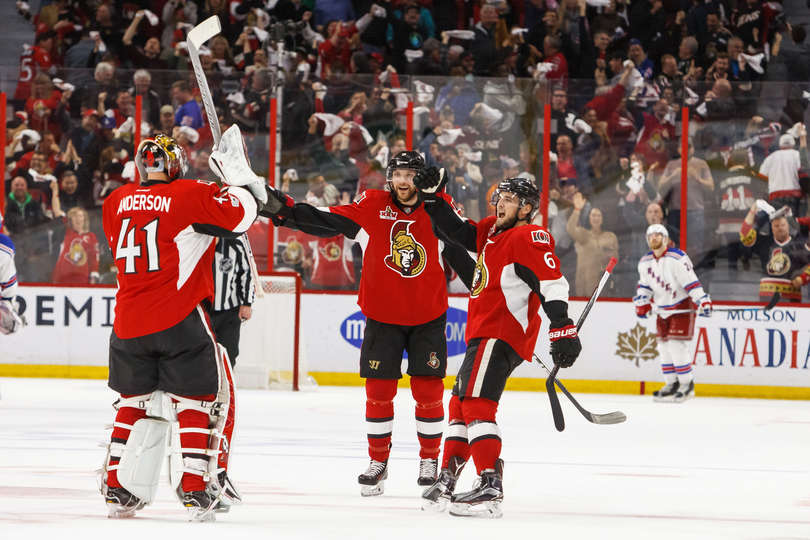 OTTAWA — Kyle Turris scored 6:28 into overtime to give the Ottawa Senators a 5-4 win against the New York Rangers in Game 5 of the Eastern Conference Second Round at Canadian Tire Centre on Saturday.

The Senators lead the best-of-7 series 3-2 with Game 6 at New York on Tuesday.

Turris had a shot blocked by Rangers defenseman Dan Girardi, but the puck bounced back to him and he slipped it through Henrik Lundqvist’s pads.

“I know it’s Kentucky Derby day. I guess that was our horse tonight,” Senators coach Guy Boucher said of Turris. “Definitely somebody who came out with the max character and the pushback we can expect from him. It was very inspiring.”

Derick Brassard scored for the Senators with 1:26 left in the third period to tie it 4-4.

Mark Stone, Mike Hoffman and Tom Pyatt scored, and Craig Anderson made 29 saves for Ottawa, which lost Games 3 and 4 on the road.

Michael Grabner scored 4:12 into overtime but the goal was disallowed because it was played by a high stick.

“We played two great games and they came out today with a really good effort,” Rangers defenseman Marc Staal said. “We’ll look to do the same. Come back in our building and play our best hockey.”

Vesey scored his first Stanley Cup Playoff goal with 7:12 left in the third period to give New York a 4-3 lead. He dove after a loose puck in the Ottawa crease and knocked the puck toward the goal line. Anderson gloved the shot, but video review confirmed the puck completely crossed the goal line.

Hoffman and Pyatt scored 33 seconds apart in the second period to put the Senators ahead 3-2. Hoffman scored on a cross-ice pass from Clarke MacArthur off the rush at 8:17 to tie it 2-2, and Pyatt scored his first of this postseason at 8:50 when he redirected a shot by Zack Smith between Lundqvist’s pads to give the Senators their second lead of the series.

The Rangers, who have scored first in each game of the series, took a 1-0 lead on Fast’s goal at 4:07 of the first period. Holden made it 2-0 at 5:13 with a shot to the top corner on Anderson’s glove side.

Stone won a battle in front of Lundqvist and banked a shot off the left post at 6:03 to make it 2-1.

“We found a way to lose some games here. That’s pretty much it,” Staal said. “We had our opportunities to close out some games here, just haven’t been able to do it. We have to win our home game now.”

With Anderson on the bench for an extra forward and the Senators trailing 4-3, Brassard batted a puck in the slot that bounced off Staal, forward Tanner Glass and defenseman Brendan Smith before Lundqvist swiped at it as it crossed the line.

Rangers forward Chris Kreider broke in from the blue line, but Anderson made the save at 9:02 of the third period to keep the game tied 3-3.

Turris scored his third goal of the playoffs and his second in the past two games. The play was started with a long pass from behind the Senators net by defenseman Erik Karlsson.

“I was able to step around [Girardi],” Turris said. “I kind of tried going five-hole and I fanned on it a little bit. I just got enough.”

Senators forward Chris Neil played 2:26 in his first game of this postseason. His teammates credited his physical presence, especially against Glass, with giving the Senators an emotional boost at home.

“He was massive,” Turris said. “He played a big part in our morale tonight and our intensity. Just him being out there is a big presence, a big impression on all of us.

“We showed a lot of character. We had a great game, a great team game. Now we just have to bring it on the road and just have fun with it. I think we were a little too tight there (in New York), a little too serious.” — Senators forward Derick Brassard

“In a play like [the tying goal], obviously you need a bounce, and the last couple games in this building we have not gotten the bounce. For whatever reason, they’re finding a way here to get it done on home ice and we have to do the same to make sure we come back here.” — Rangers goaltender Henrik Lundqvist

The Senators have led for 13:10 in the series, 8:59 in this game. … The Rangers have scored at least four goals in four consecutive playoff games for the first time since they did so in six straight during the 1994 playoffs, when they won the Stanley Cup. … NHL teams that win Game 5 to take a 3-2 lead win a best-of-7 series almost 80 percent of the time (196-54), according to the Elias Sports Bureau.