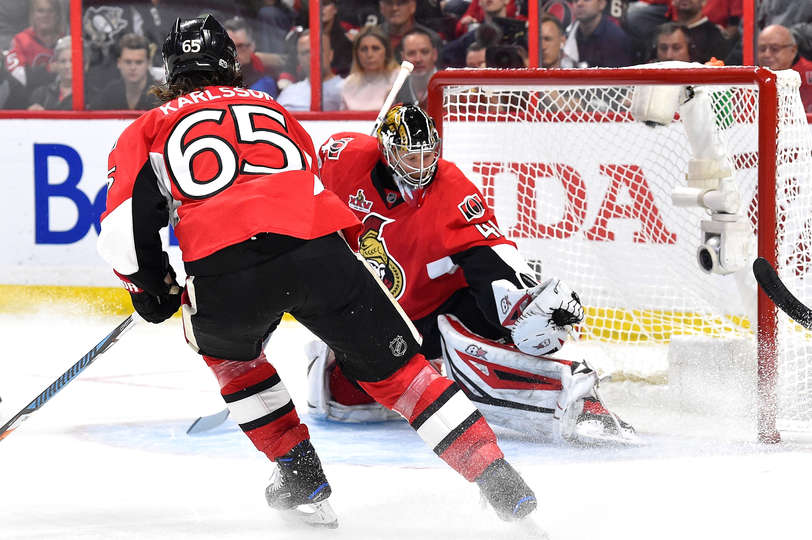 OTTAWA — The Ottawa Senators scored four first-period goals in a 5-1 win against the Pittsburgh Penguins in Game 3 of the Eastern Conference Final at Canadian Tire Centre on Wednesday.

The Senators lead the best-of-7 series 2-1 with Game 4 here Friday.

Mike Hoffman, Marc Methot, Derick Brassard and Zack Smith scored in the first, and Kyle Turris also had a goal for Ottawa. Craig Anderson made 25 saves.

Sidney Crosby scored for Pittsburgh. Marc-Andre Fleury allowed four goals on nine shots and was replaced by Matt Murray, who made 19 saves in his 2017 Stanley Cup Playoff debut.

Hoffman gave the Senators a 1-0 lead 48 seconds into the game.

The three goals came in a 2:18 span, the fastest the Senators have scored three in the playoffs in their history. Ottawa’s previous record was 4:00 in a 5-0 win against the Toronto Maple Leafs in Game 1 of the 2002 conference semifinals.

“You can’t expect to win games getting a start like that, especially in the playoffs,” Crosby said.

It was Crosby’s first point of the series and his first goal in eight games.

“It’s tough when you give up that many goals in the first period. You don’t really give your team a chance in the game. It wasn’t like we gave up a lot of scoring chances. We didn’t. But they all seemed to go in the net.”

Murray, who helped the Penguins win the Stanley Cup last season, played for the first time since April 6. He was injured during warmups prior to Game 1 of the first round against the Columbus Blue Jackets on April 12.

Hoffman gave the Senators the start they wanted when he banked a shot from along the goal line off the bottom of Fleury’s pad.

“I got one early on and then the crowd got into it and it seemed like we got rolling and they couldn’t play with it or stop it,” Hoffman said.

With the Senators on the power play at 7:29 of the second period, Penguins forwards Matt Cullen and Carter Rowney broke out on a 2-on-1. Cullen passed to Rowney and Anderson made a sharp glove save.

Smith shot the puck off the boards and gathered the rebound. He skated around the net and scored on a wraparound with Fleury out of position.

Smith led Ottawa forwards in ice time with 18:44, and had four shots, five hits and one blocked shot. He also played 2:27 shorthanded.

“We played a good game. We’ve played now three games, so nine periods. We’re very happy with eight periods out of the nine. We didn’t like our third period [in Game 2] in Pittsburgh.” — Senators coach Guy Boucher

“Like always in the playoffs, I think we’ve been good at [having] short memories. If it’s a 2-1 loss or a 5-1 loss, we look at it the same way and just put it behind us and be ready for the next one.” — Penguins goaltender Marc-Andre Fleury

“We talk about our first 10 minutes and we’ve probably bored you with that answer, but it’s the honest truth and tonight we really got back to playing the way we wanted to and dictating spending time in their zone.” — Senators defenseman Dion Phaneuf

Hoffman’s goal was the third fastest in Senators playoff history. Brassard was 14-for-16 (88 percent) on faceoffs; Ottawa was 37-for-57 (65 percent) in the game. Senators forward Alexandre Burrows left the game in the second period after sustaining a lower-body injury when he was tangled up with Penguins defenseman Ian Cole in front of the Penguins net. Boucher said he was hopeful Burrows would be available for Game 4. … Sullivan dressed seven defensemen with Trevor Daley and Mark Streit returning to the lineup. … The team that wins Game 3 to take a 2-1 lead in a best-of-7 series is 205-99, including 3-2 this postseason.