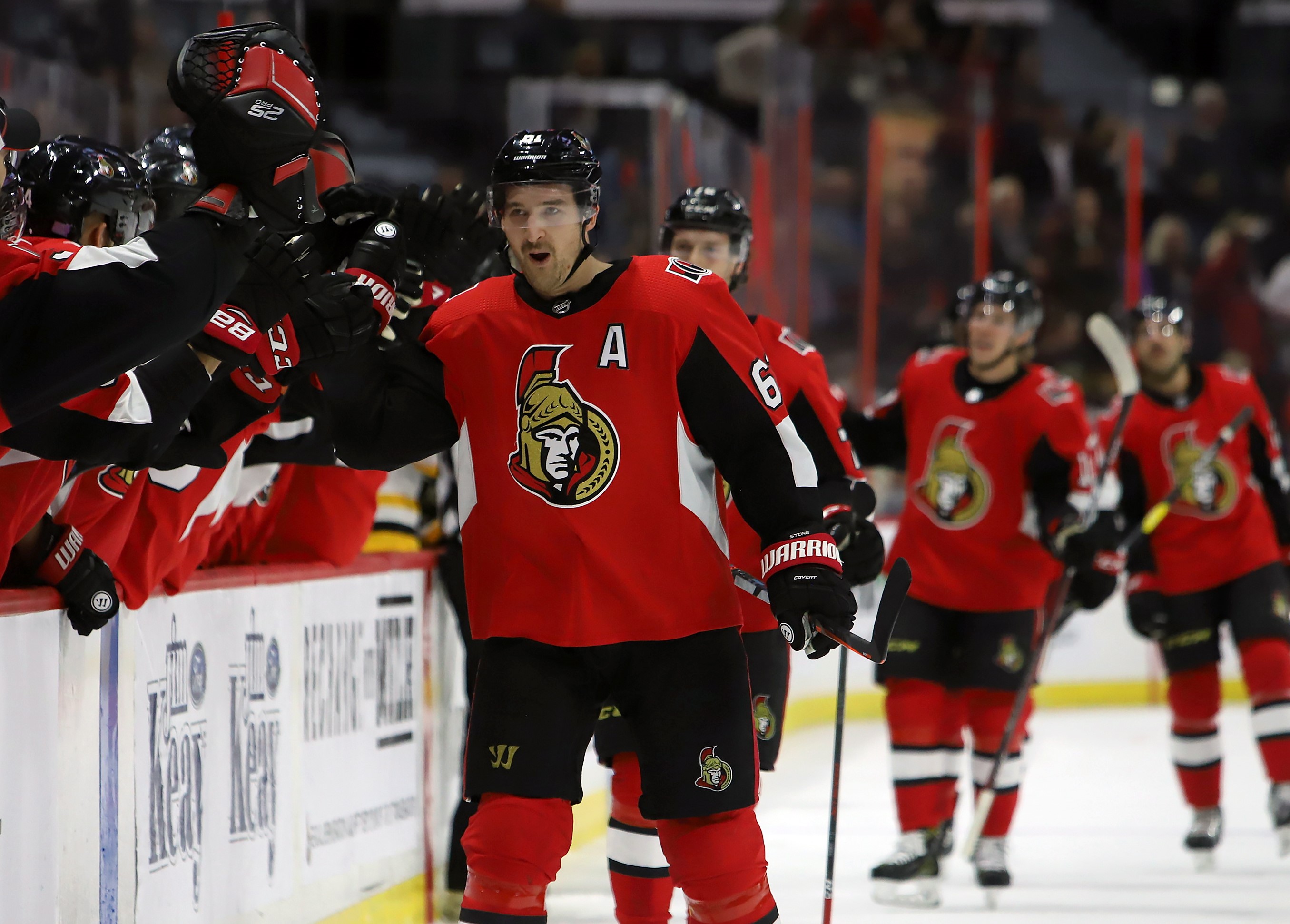 NHL.com Recap
OTTAWA — Matt Duchene had two goals and an assist for the Ottawa Senators in a 6-4 win against the Pittsburgh Penguins at Canadian Tire Centre on Saturday.

Mark Stone scored twice, Mikkel Boedker, Ryan Dzingel and Drake Batherson each had two assists, and Craig Anderson made 31 saves for Ottawa (9-8-3), which has won two straight and three of four.

“I think we came out strong, deserved our goals, absolutely,” Senators coach Guy Boucher said. “I thought we kept it down for the first two periods, defensively, and we were expecting a push in the third. [The Penguins are] Stanley Cup Champions, and guys that are proud and guys that have a lot of experience and so much talent. They’re a stacked team.”

Kris Letang, Zach Aston-Reese, Matt Cullen and Patric Hornqvist scored, and Phil Kessel and Evgeni Malkin each had two assists for Pittsburgh (7-8-3), which is 1-7-1 in its past nine games. Matt Murray allowed three goals on 10 shots. He was replaced at the start of the second period by Casey DeSmith, who made 12 saves.

“We’re a team that, for me, when we don’t beat ourselves, we’re a hard team to beat,” Murray said. “I think the last couple games, we’ve just been doing little things throughout the game that beat [us]. But the good thing is, that’s easily corrected, and I think if we correct those things, then we’re right back in it.”

Letang gave the Penguins a 1-0 lead on the power play with a slap shot from the point that went off the right post and in at 11:59 of the first period.

Duchene made it 3-1 at 18:50, redirecting a pass from Boedker through the legs of Murray.

Stone extended the lead to 4-1 at 16:35 of the second period with a shorthanded goal. After intercepting a pass from Penguins defenseman Olli Maatta in the neutral zone, he beat DeSmith with a backhand on a breakaway.

“We didn’t help ourselves with some of the decisions that we made, either with the puck or without the puck,” Penguins coach Mike Sullivan said. “The first couple goals, we just didn’t pay attention to details. We didn’t manage the puck late in shifts and it cost us. We didn’t change smart, and that cost us on one. When you give up three goals like that, it’s a tough mountain to climb.”

“I think 500 is a big one,” Duchene said. “I feel lucky to have played this game as much as I have already and play in this League. I wake up every day and I love what I do.”

Aston-Reese made it 5-2 at 2:20 of the third period when his shot deflected off Senators defenseman Dylan DeMelo’s stick and past Anderson. Cullen cut it to 5-3 at 5:34 on a rebound in front.

“They were coming,” Stone said. “They’ve won two Stanley Cups in the last three years, they’re not just going to roll over and die on us. They came with pressure, they forced us to bear down a little bit more than I think we were expecting, but overall, I think we played a pretty good 60-minute effort.”

They said it
“I’m sure it is, he’s a human being. He’s a proud guy and he wants to do well. Sometimes when you get in these types of circumstances, sometimes you can try a little too hard and then it gets in the way of your instinctual play. There’s always that fine line of trying, but making sure you don’t try too hard, because that can be counterproductive. When we go through a stretch like we’re going through, I don’t think Matt’s any different than a lot of our guys.” — Penguins coach Mike Sullivan on if goalie Matt Murray’s confidence is down

“He’s just going to keep getting better and better. You can see he’s got that little ‘it’ factor that’s going to make him an elite player. That pass he made to me (on his second goal), I mean, he had an outstanding touch there. There’s not a lot of guys that can make that play, especially at his age. The sky’s the limit for him. You guys are going to see him go north pretty quick here.” — Senators forward Matt Duchene on forward Drake Batherson