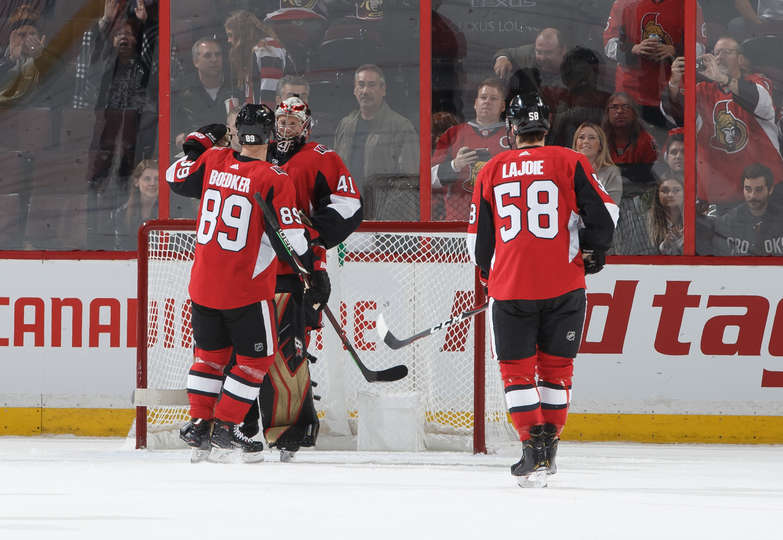 NHL.com Recap
OTTAWA — Maxime Lajoie scored and extended his point streak to three games in the Ottawa Senators’ 4-1 win against the Dallas Stars at Canadian Tire Centre on Monday.

Senators goaltender Craig Anderson made 37 saves; it was the second straight game he allowed one goal and made at least 36 saves.

Lajoie, a rookie defenseman, tied the game 1-1 with a wrist shot at 19:40 of the second period. He leads the Senators (3-2-1) with four goals. No defenseman in their history, regardless of status, has had more points (seven) in his first six games.

“I don’t think I’ve went on a, I guess, heater like this in a while,” said Lajoie, a fifth-round pick (No. 133) by the Senators at the 2016 NHL Draft. “Even in junior (Swift Current of the Western Hockey League), it was just kind of maybe every second game or something like that. But no, it’s a pretty good feeling.”

“The fun I think is just watching our young guys step up and start contributing at a rapid rate at the moment,” Anderson said. “Guys have just kind of crept in and filled those roles where guys weren’t maybe expecting them to. That’s fun, just watching these kids go out there and have a blast.”

Defenseman John Klingberg scored and goaltender Ben Bishop made 20 saves for the Stars (3-2-0).

“I think [Klingberg’s] confident right now and shooting the puck a lot,” said Stars coach Jim Montgomery, “which is good for the power play and should be good for us 5-on-5.”

The Senators took a 2-1 lead 1:27 into the third period when Tkachuk redirected a pass at the top of the crease over Bishop’s right pad.

“When you get a guy that’s in the top-four, top-five [in the] draft, you know you’ve got something special,” Senators coach Guy Boucher said. “You don’t know how long it’s going to take, though, before the contribution is that big. It’s consistent now. [Tkachuk’s] been doing great and he’s learning. He’s a treat to coach. He’s deserving it. He’s making that net his office now and it’s helped us a lot. We didn’t have enough of that in the past.”

Boedker made it 3-1 at 10:12 when he one-timed a pass from Duchene from behind the net.

They said it
“I didn’t really think there was all that much momentum to the game. It was kind of like the least energetic game that we’ve played and that we’ve been a part of. I really liked our first period, but then I didn’t like us after that. We didn’t play with the same purpose.” — Stars coach Jim Montgomery

“It’s kind of hard to explain; not too sure what’s going on right now. I guess I’m just at the right spot at the right time. Guys are making plays for me, so it’s been nice.” — Senators defenseman Maxime Lajoie