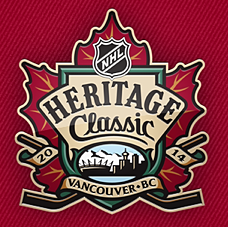 VANCOUVER — Parri Ceci wanted his son to follow in his footsteps and play in the Canadian Football League. Now a defenseman for the Ottawa Senators, Cody Ceci got to star on a CFL field Sunday but not in the way his father had envisioned.

Ceci’s second-period goal was the difference in Ottawa’s 4-2 victory against the Vancouver Canucks at the 2014 Tim Hortons NHL Heritage Classic at BC Place.

“I played football for a couple years,” Ceci said. “He (his father) probably would have liked to see me play football, so this was as good as it would get.”

Clarke MacArthur had a goal and an assist, and Erik Karlsson and Colin Greening also had goals for the Senators. Craig Anderson made 29 saves to earn his 20th win.

Jason Garrison and Zack Kassian scored for the Canucks, and rookie goaltender Eddie Lack made 24 saves as the surprise starter ahead of veteran Roberto Luongo.

“I have to make decisions each and every time right now, with such short strokes, on what’s going to give us the best chance to win,” Canucks coach John Tortorella said. “Eddie was playing lights out in the games he’s played. He has been very good all year long. He deserved to play this game.”

In addition to the two points lost, the Canucks also played most of the final two periods without top-line forward Daniel Sedin. Sedin was carrying the puck behind the Vancouver net early in the second period when he was hit into the boards by Ottawa defenseman Marc Methot. Sedin remained down on the ice for several moments, but was able to skate off slowly on his own. He remained on the bench for a bit, but then left for the locker room, with two Canucks employees helping him make the long walk from the ice to the locker room.

The Canucks had no update on Sedin’s condition after the game. The Canucks next play Tuesday at the Phoenix Coyotes.

The victory moved the Senators within three points of the Detroit Red Wings for the final wild-card spot in the Eastern Conference with 21 regular-season games remaining.

“We have to keep winning,” Senators coach Paul MacLean said. “If you want to get in, you have to win. We have to get ready for the next game. … We have to turn around [Monday] and go to Edmonton and get ready to play another difficult opponent. We go day-by-day, game-by-game. We still think we’re going to like where we are after 82 games.”

Aiding the effort Sunday was Ceci, the 15th pick of the 2012 NHL Draft playing in his first professional season. A highly regarded athlete, Ceci didn’t fully focus on hockey until he joined the Ottawa 67s of the Ontario Hockey League when he was 16 years old.

Hockey certainly has looked to be a better choice than football. The goal Sunday was Ceci’s second in the NHL, and both have been game-winners. In addition, his two goals in 24 games with the Binghamton Senators of the American Hockey League this season have come in overtime.

“I guess that’s all I’m good for these days,” Ceci said of his game-winners. “I didn’t know if it was going to hold until end of the day, and it did. It’s a special feeling. I’m not complaining. It’s just been a funny year for me that way. They’ve all been pretty special goals.”

“He scored a couple of big ones in Binghamton and scored a big one in overtime against St. Louis and then another big one [Sunday],” Senators captain Jason Spezza said. “He’s got a flair for the dramatic. That’s a good quality for a young player.”

Spezza was a supporting player in the winning drama Sunday. He carried the puck into the Vancouver zone midway through the second period, and Ceci joined the play to give the Senators a 3-on-2 advantage. Spezza slid the puck to his right to Ceci, who stepped around Vancouver defenseman Dan Hamhuis and fired a wrist shot that beat Lack at 10:11 of the period.

“I just jumped up,” Ceci said. “Spezza saw me coming down the wing. I had a step on one of the defensemen and I ended up shooting it far side, and it ended up going through.”

The Canucks pushed for the equalizer, outshooting the Senators 11-6 in the third period, but Vancouver, which entered the game 27th in the League at 2.34 goals per game and missing one of its top scorers, was unable to score the tying goal.

“I still think we’re trying to find our way offensively to make the next big play,” Tortorella said. “With Danny going out, that hurt me a little bit as far as some of the line combinations. … First 10 minutes of the first period was good, but I thought our third period was our best period of the game. We just don’t convert; our power play doesn’t work. Couldn’t crawl back into it.”

It was an exciting finish to the final game played outside a traditional NHL arena this season.

“We thank the Canucks and Senators for contributing to the terrific atmosphere at BC Place [Sunday] and for providing such an entertaining conclusion to two historic months for the National Hockey League,” Commissioner Gary Bettman said. “While the weather outside prevented us from opening the roof at this outstanding stadium, the energy indoors from the more than 54,000 fans made for a memorable afternoon.

“Through the 2014 Bridgestone NHL Winter Classic, the 2014 Coors Light NHL Stadium Series, the 2014 Olympic Winter Games in Sochi and the 2014 Tim Hortons NHL Heritage Classic, our teams and our players displayed the very best qualities of our sport to over 375,000 fans in-person and an international viewing audience of millions more. We thank our fans, our clubs and our players for this ‘season like no other,’ and we look forward to an exciting run to the Stanley Cup Playoffs.”

The retractable roof remained closed at BC Place due to the rain and snow falling outside, but it did little to diminish the unique atmosphere of playing in an ice rink built on the home field of the British Columbia Lions of the CFL.

“It was definitely different,” Ceci said. “We all enjoyed it. It reminded us of the old days playing out on ponds.”

“It was pretty cool,” Canucks forward Alexandre Burrows said. “First time for me to play in front of that many people, and the crowd seemed to be into it. You will remember that one for a long time.”

The big crowd of mostly Canucks fans was happy early as Vancouver scored twice in the first 11:27 of the game; it marked the first time they scored more than one goal in a period in 10 games, dating to the first period of their game Jan. 26 against the Phoenix Coyotes.

Garrison opened the scoring 4:54 into the game with his fifth goal of the season. Greening was called for high sticking at 3:17, and the Canucks took full advantage when Garrison’s shot from the point went off Senators forward Kyle Turris‘ stick out high and went under the crossbar.

The power-play goal was the Canucks’ first in four games and snapped an 0-for-8 streak.

Kassian’s 11th of the season made it 2-0 at 11:27. Karlsson had the puck deep in the right side of the Ottawa zone, but turned it over to Kassian due to pressure from Vancouver’s Brad Richardson. The Canucks forward sent a low shot on net that eluded Anderson.

The Senators scored twice in a span of 1:47 later in the first to tie the game, with MacArthur having a hand in both goals.

Eric Gryba ended up with the puck in the Vancouver end. His shot was blocked, but the puck bounced to Erik Condra in the middle of the zone. Condra caught the shot on the heel of his stick, sending a low, soft shot on net that MacArthur redirected off the post and past Lack at 15:15.

Moments later, during an Ottawa power play, the Senators tied the game. MacArthur won a puck battle along the wall on the left side of the Vancouver zone and pushed the puck to Karlsson at the point. Karlsson slid left to right across the top of the Canucks zone until he found a seam on the right side. He fired a shot along the ice to the far side that went through a Turris screen and past Lack’s right foot at 17:03. The goal was Karlsson’s 16th, tops among NHL defensemen.

After Ceci put the Senators ahead in the second, Greening finished the game with an empty-net goal at 18:27 of the third.

The Canucks will look to regroup and stay in the hunt for a playoff spot. They remain tied with the Dallas Stars and Winnipeg Jets with 66 points, but the Stars hold the final wild-card spot in the Western Conference by virtue of having played two fewer games.

“That’s a game we should have won,” Canucks captain Henrik Sedin said. “If you have a two-goal lead in this league, we know how hard it is to come back from those deficits.”

The Senators left Vancouver hoping the win will propel them toward a spot in the postseason. The Heritage Classic was the first of a four-game trip against the three Western Canada teams and the Winnipeg Jets.

“We hope it launches our march,” Spezza said. “… It’s hard to come out here to Western Canada and play in all these rinks and take a lot of points. It’s a necessity for us though. We hope this is a big jumping-off point for us.”