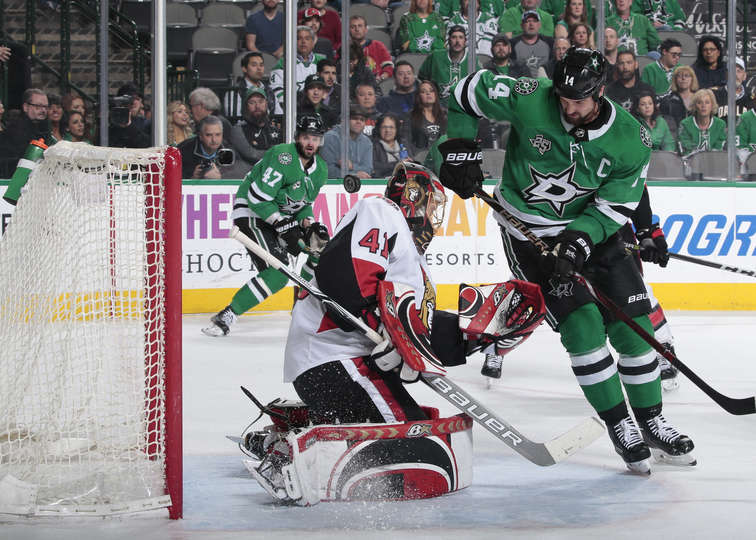 NHL.com Recap
DALLAS — Erik Karlsson scored at 2:41 of overtime to give the Ottawa Senators a 3-2 win against the Dallas Stars at American Airlines Center on Monday.

Tyler Seguin scored twice for the Stars (37-23-6, 80 points), including the game-tying goal with 1:08 remaining in the third period. Dallas has the first wild card into the Stanley Cup Playoffs from the Western Conference and moved within one point of the Minnesota Wild for third place in the Central Division.

“We got a point, and we tried everything we could to get the focus where it was, but some guys were good, and some guys struggled,” Stars coach Ken Hitchcock said.

Seguin, who sent the game to overtime when he scored with Kari Lehtonen pulled for an extra attacker, said he and his teammates were guilty of looking ahead to playing the division-leading Nashville Predators on Tuesday.

“We forgot that we’re still in the NHL and every team’s good with the parity in this league,” Seguin said. “I thought, myself included, we played like we were saving energy for (Tuesday) night. So, we better be flying then.”

Stars goalie Ben Bishop left after the first period because of a lower-body injury. Dan Hamhuis fell into Bishop midway through the first after getting his legs tangled in the stick of Jean-Gabriel Pageau.

Bishop made 12 saves. Hitchcock said Bishop will miss at least the next two games.

Karlsson grabbed the puck at his own blue line, outraced Tyler Pitlick to the other end of the ice and sent a backhand shot past Lehtonen (15 saves).

“Tonight, Erik was outstanding and our goalie was outstanding,” Senators coach Guy Boucher said. “That’s what you get when the two most important players on the team are at their best. That’s when we’re at our best.”

The win followed a 2-1 loss against the Arizona Coyotes on Saturday to finish a four-game road trip 2-2-0.

“We’re building toward next year,” Duchene said. “It’s not where we want to be, but we’re in this position. We had everybody pulling. I don’t think we had any passengers. It’s too good of a league now. If you have two of three guys not going, you’re toast.”

Duchene gave Ottawa a 2-1 lead at 6:36 of the third period when he beat Lehtonen short side from the left face-off circle on the rush for his 19thgoal of the season.

Seguin gave Dallas a 1-0 lead with a power-play goal at 4:36 of the first period.

Goal of the Game
Karlsson’s goal at 2:41 of overtime.

Save of the Game
Anderson’s save against Mattias Janmark at 18:30 of the third period.

Highlight of the Game
Seguin’s goal at 18:52 of the third period.

They said it
“I think 3-on-3 is one of our strong suits. Maybe we should try to take coinciding penalties throughout the game and get 3-on-3 going in the regular game.” — Senators goalie Craig Anderson

“You’ve been sitting there for a while. You just go there and start trying to get the things going and rolling. And then, after a while, it feels like you belong there.” — Stars goalie Kari Lehtonen