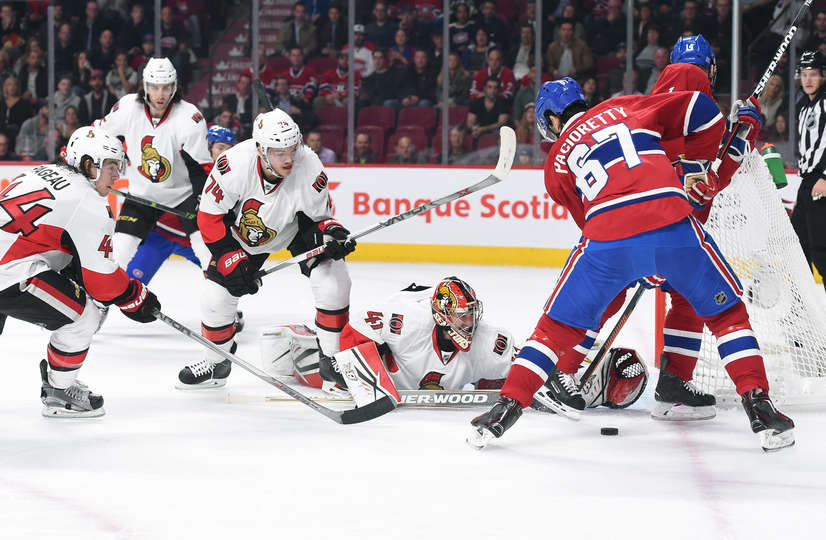 Kyle Turris scored 34 seconds into overtime to give Ottawa a 2-1 win against the Montreal Canadiens at Bell Centre on Tuesday.

Turris took a pass from Mike Hoffman and scored on Montreal goalie Mike Condon for his eighth goal on the first shot in overtime.

The Senators’ previous overtime games were all decided by shootout, which they split, 2-2.

“It was nice to actually get an odd-man rush in overtime, and it was a beautiful pass by [Hoffman] to give me an open net,” said Turris, who has scored in four consecutive games.

Jean-Gabriel Pageau scored a shorthanded goal in the second, and Craig Anderson made 36 saves for Ottawa (6-4-2), which is 5-1-0 on the road.

“We’ve been good on the road,” Anderson said. “We’ve come ready to play and we find ways to win games on the road, and that’s good, that’s hard to do. It’s hard to come into this building and beat this team; they’re a good team and it’s a great energy building, their fans get behind them, and I’m just proud of the way the guys played [Tuesday].”

Dale Weise scored a power-play goal for the Canadiens (11-2-1), who had won their first five games at home.

Condon made 25 saves in his first loss in five starts, his third in a row with Carey Price sidelined for a week because of a lower-body injury.

“No one likes losing. It was a hard-fought game,” Condon said. “I thought Craig Anderson played really well, we took it to them in the third. That’s the way it goes sometimes. It was a nice play there in overtime. We’ll take the point.”

Right wing Mark Stone, Ottawa’s leading scorer, served the first game of a two-game suspension for his hit to the head of Detroit Red Wings forward Landon Ferraro on Saturday.

Montreal defenseman P.K. Subban misfired his one-timer attempt on a pass back to the right point on the play that led to Pageau’s goal.

With Senators defenseman Cody Ceci serving a high-sticking penalty, Pageau picked up the loose puck and drove straight down the ice to beat Condon with a shot between the legs for his second shorthanded goal.

Pageau also scored a shorthanded goal against Condon in a 3-1 loss to the Canadiens on Oct. 11.

Weise tied it and got credit for his seventh goal at 6:13 when he converted a passing play that began with Montreal’s David Desharnais regaining a puck along the boards.

Desharnais passed the puck back to the left point to defenseman Andrei Markov. Alex Galchenyuk took Markov’s cross-ice pass and fed the puck to Weise, who flubbed his shot but had the puck bounce up and off his legs on the way into the net.

“That was a good shift. The three of us were working hard there,” Weise said. “We haven’t had a lot of power play time together but I think we had some good looks, we had some good chances just before, one in the slot. That feels good to score on the power play for us.”

Each team had an apparent goal disallowed.

Canadiens center Tomas Plekanec appeared to have opened the scoring at 14:24 of the first, but his goal was immediately waved off by referee Chris Lee.

“The explanation I got was I was in the crease, which I agree with, I was,” Gallagher said. “But the replay I saw, I don’t know, maybe there were other ones, I didn’t think I made contact. But he said I interfered with his ability to get across just by being there. I’m going to the net to make it tough on him, that’s what I’m trying to do.”

Ottawa was denied an opportunity to take the lead in the third. Referee Garrett Rank immediately signaled no-goal at 4:55 because he had blown his whistle before Alex Chiasson jammed in the loose puck between Condon’s pads.

“You just worry about the things you can control,” Senators coach Dave Cameron said. “We had no control over the whistle, and that’s how we play.”