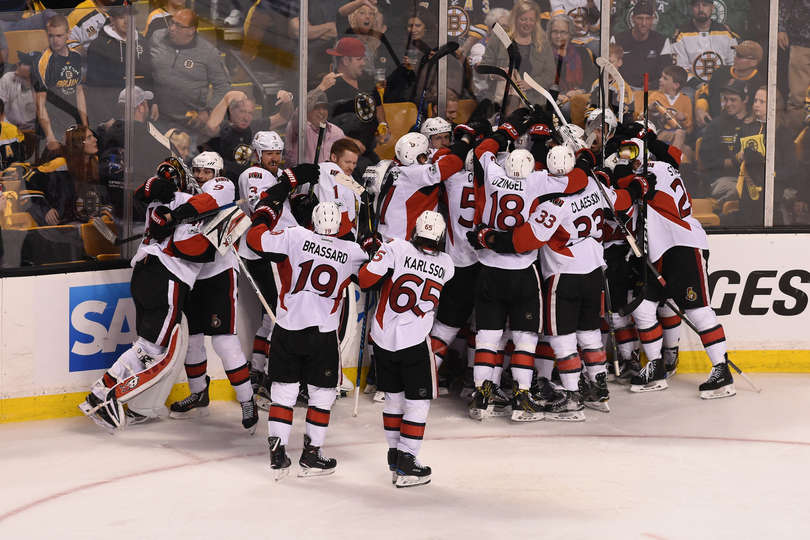 BOSTON — Clarke MacArthur scored a power-play goal 6:30 into overtime to give the Ottawa Senators a series-ending 3-2 win against the Boston Bruins in Game 6 of the Eastern Conference First Round at TD Garden on Sunday.

MacArthur, who drew the penalty on Bruins forward David Pastrnak, scored his second goal of the series.

Ottawa won the best-of-7 series 4-2 and will play the New York Rangers in the second round.

“It was great. Obviously the biggest thing was not having to go seven with them,” MacArthur said. “They’re a resilient group and the injuries they had, they gave us pretty much everything they had. So you know obviously it’s great to end it here. I’ve had some nightmares in here and it’s nice to be on the other side of it.”

Bobby Ryan and Kyle Turris also scored, and Craig Anderson made 28 saves for the Senators, who advanced to the second round for the first time 2013. The Senators won all three games in Boston in this series and went 5-0-0 here this season.

Drew Stafford and Patrice Bergeron scored, and Tuukka Rask made 26 saves for the Bruins, who were without center David Krejci because of a lower-body injury sustained in Game 5. Boston was without three regular defensemen (Torey Krug, Brandon Carlo, Adam McQuaid) because of injury.

The Bruins took a 1-0 lead on a power-play goal by Stafford at 18:13 of the first period. After a return pass from Marchand, Stafford beat Anderson with a slap shot from the right dot.

Ryan tipped Derick Brassard’s shot past Rask 3:26 into the second period to tie it at 1-1. It was Ryan’s fourth goal of the series.

Bergeron tied it at 2-2 by stuffing in a rebound of a Marchand shot 1:57 into the third period.

After Ryan Dzingel passed to Turris, the Ottawa center skated to the high slot and beat Rask with a wrist shot.

The Bruins had momentum after tying the score at 2-2. Boston forward Noel Acciari took a one-timer from the slot through a David Backes screen, but Anderson made the save at 7:08 of the third period before clearing the rebound to the corner with his stick.

MacArthur closed the series with a one-timer from the slot on a rebound. Ryan slid the puck to the goal line, where Brassard took a tough-angle wrist shot. The puck went off Rask’s pad to MacArthur.

Ryan returned after missing 12 minutes with an injury in the third period to take one shift before setting up the overtime goal. He had four takeaways in 15:31 of ice time.

“I think it was just a down-and-in; we were going to do it right off the bat, just to kind of get something at the net. And [Ryan] makes a good power move to get it to the net … it was off [Rask’s] pad and it went right to me and I was lucky enough to be in the right spot.” — Ottawa forward Clarke MacArthur his overtime goal

“We can’t be really standing here and kind of feeling sorry for ourselves because we lost so many guys but that’s part of the playoffs. That’s hockey and unfortunately we missed some guys but I’m very proud of how we battled, how we never gave.” — Boston captain Zdeno Chara on the Bruins’ ability to fight through injuries to four defensemen and play without David Krejci for three games in the series

Ottawa forward Viktor Stalberg played 13:27 after he was a game-time decision because of an undisclosed injury. … Krejci was in the press box with a brace on this left knee. … Forward Matt Beleskey took Krejci’s place in the lineup and played 6:34. … Stafford’s goal was the only first-period goal of the series for the Bruins. … Boston is 0-23 in best-of-7 series when they trail 3-1.