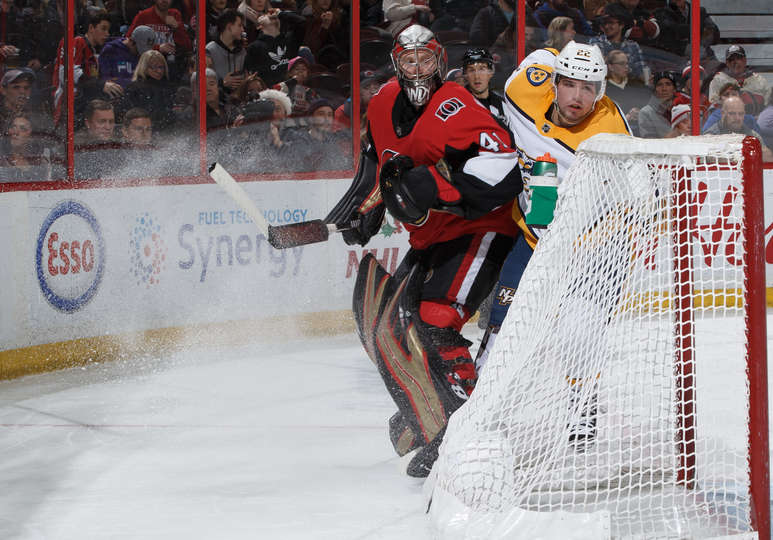 OTTAWA — Thomas Chabot scored 21 seconds into overtime to give the Ottawa Senators a 4-3 win against the Nashville Predators at Canadian Tire Centre on Monday.

Chabot’s snap shot from the left circle went off the left post and in.

“When [Chabot] takes off he’s tough to follow,” Senators coach Guy Boucher said. “In overtime, with open space like that, he’s so dangerous. I’m really happy because in the second period, we were disappointed at the number of times we didn’t shoot and felt we lost momentum because of it. In overtime, instead of looking for the fancy play, he shoots and it pays off.”

Ryan Dzingel had a goal and an assist, Brady Tkachuk scored, and Mark Stone had two assists for the Senators (15-16-4), who have won two of their past three games. Craig Anderson made 31 saves.

Roman Josi had two goals and an assist, and Ryan Johansen had three assists for the Predators (22-10-2), who had won three straight. Pekka Rinne allowed three goals on 11 shots. He was replaced at the start of the second period by Juuse Saros, who made 11 saves.

“[We showed] a lot of character coming back,” Josi said. “Definitely not a good start. I’ll take a lot of responsibility for that, too. I wasn’t good in the first. … In the first, we were just too slow. They were faster than us. We didn’t win battles. We didn’t battle hard enough.”

Maxime Lajoie gave the Senators a 1-0 lead at 2:25 of the first period when his snap shot trickled over the line on the power play.

“Sometimes you need those when you’re kind of in a funk,” Stone said of Tkachuk. “I thought he played really well on the [three-game road] trip. Detroit, he had tons of chances. Montreal, he drove a lot of the play in the first period when we were getting those opportunities. Tonight, right from the start, he was all over the ice. Nice to see him get rewarded.”

Dzingel took a stretch pass from Stone and scored top shelf on a breakaway to make it 3-0 with 12 seconds left in the first period.

Josi scored on a rebound on the power play to make it to 3-1 at 5:37 of the second period.

Tkachuk appeared to give Ottawa a 4-1 lead at 14:59, but the Situation Room initiated a video review, and the call was reversed after it was determined the puck was played with a high stick.

Mikkel Boedker also had a goal waved off because of a high stick with 1:06 left in the first period.

“I thought [Boedker’s] was pretty close,” Tkachuk said. “I knew mine right away, it was over my shoulder. I’m a pretty big guy, so I knew it wasn’t going in. Tried to sell it a bit, but it didn’t work.”

Craig Smith scored 46 seconds into the third period on a wrist shot that went top shelf on the power play to cut it to 3-2.

Josi tied it 3-3 when his shot from the point redirected in off the stick of Dzingel at 6:56.

“Our guys did a great job as far as settling down and not panicking, and just kind of rolling with the punches there,” Anderson said.

They said it
“I’m frustrated, disappointed. We came here to play a game. We didn’t do what we were supposed to do, and so that is not good enough, especially when you’ve lost as many on the road as we have (8-5-2).” — Predators coach Peter Laviolette

“We didn’t throw the puck away, that was the main thing. When we start to reel a little bit and we start going the other way, it’s because we don’t want the puck. Whether it was 3-2, 3-3, it didn’t matter what the score was, we actually tried to make plays and tried to hold onto it. It’s tough because you’ve got pressure, but our guys did a great job of absorbing pressure and making the next play.” — Senators goalie Craig Anderson

Need to know
The Predators have lost seven straight on the road (0-5-2). … Smith had a game-high seven shots on goal.