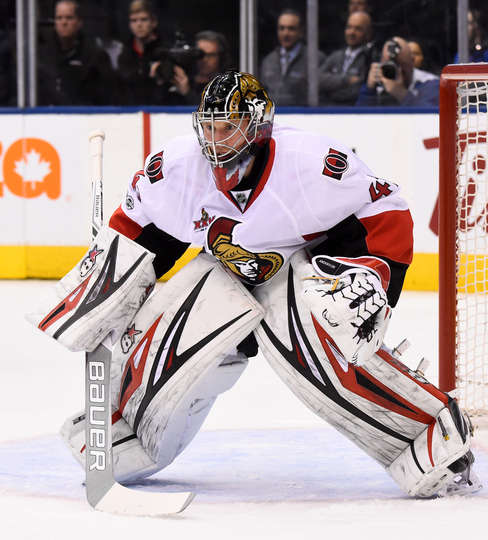 NHL.com recap:
TORONTO — Mike Hoffman and Derick Brassard scored 54 seconds apart in the third period to help the Ottawa Senators come from behind to defeat the Toronto Maple Leafs 6-3 at Air Canada Centre on Saturday.

“We were expecting a very tight game; that’s what it’s been against them,” Senators coach Guy Boucher said. “We told the players that probably after two periods it’s an equal game, it’s a one-goal game, and that’s what it was. In the end, when you expect a tight game after two periods, you’re not disappointed; your mind is in the right place. There was no panic.”

Mark Stone had five points, and Craig Anderson made 34 saves for the Senators (31-19-6), who have won two in a row and are five points ahead of the Maple Leafs for second place in the Atlantic Division. Ottawa trials the first-place Montreal Canadiens by two points with three games in hand.

“Tonight was a classic case of managing the momentum,” Anderson said. “First period was kind of going back and forth, they got a 5-on-3 and they didn’t really generate much. In the second period it felt like we were managing the game really well and had a lot of pressure. Our 5-on-3, we lost momentum and gave it back to them. In the third period, it went back and forth again. It was just one of those nights where it could have gone either way.”

The Maple Leafs (26-20-11) had three power plays in the first period, including a two-man advantage for 22 seconds, but could not score.

The Senators, who led 2-0 in the first period, tied it 3-3 at 5:32 of the third when Hoffman’s wrist shot from the high slot fooled Andersen.

Ottawa took a 4-3 lead at 6:26 on a power play when Brassard tapped in a rebound during a scramble in the goal crease. Stone scored into an empty net with 1:50 left to make it 5-3, and Brassard scored his second to make it 6-3 with 45 seconds to go.

“We had ample, ample opportunity to win the game down the stretch,” Maple Leafs coach Mike Babcock said. “We had lots of push at the net and we didn’t score and they did. In the end, when you look at the score, 6-3, you don’t think it was a very good hockey game, but I think it was a pretty good hockey game. I think we can play way better though. I think we can play better structurally defensively, so we have to get better.

Ottawa built a 2-0 lead on goals from Chris Wideman and Ryan Dzingel 20 seconds apart beginning at 17:26 of the first period.

William Nylander gave Toronto a 3-2 lead at 2:04 of the third period.

“We were expecting a push after the first period and we got one,” Brassard said. “We stuck with it and showed a lot of character. We’ve been doing that all year long. Our goaltending was good, we had some key saves at key moments of the game.”

Dzingel dove into the crease to knock away the rebound from a Nikita Zaitsev point shot that got behind Anderson. As Dzingel was trying to get back up, Kadri shot off his head from behind the goal line.

Anderson moved quickly to his left to make a glove save on Tyler Bozak, who shot from the right faceoff circle after being set up by a pass from James van Riemsdyk. The save at 1:21 of the third period kept the score 2-2.

Toronto defensemen Matt Hunwick and Roman Polak were on the ice for the first 1:40 of Ottawa’s 1:49 two-man advantage in the second period.

“He doesn’t need to earn his ice time with me. That’s in his mind. For me, he’s our No. 1, that has never changed and it won’t change. [Mike] Condon has developed himself into a terrific backup, and they have a really good relationship between the two.” — Senators coach Guy Boucher on goalie Craig Anderson

Stone had one goal and four assists to set his NHL high for points in a game. … Senators center Kyle Turris had three assists and won 15 of 20 faceoffs (75 percent).