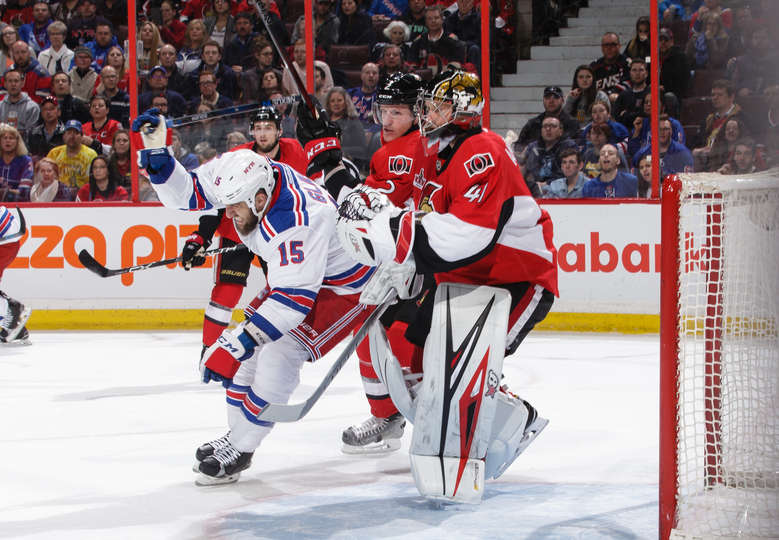 NHL.com recap:
OTTAWA — The Ottawa Senators clinched second place in the Atlantic Division with a 3-1 win against the New York Rangers at Canadian Tire Centre on Saturday.

Ottawa will have home-ice advantage in its Eastern Conference First Round series against either the Boston Bruins or Toronto Maple Leafs, who are tied for third in the division. The Stanley Cup Playoffs begin Wednesday; the schedule will be announced Sunday.

Craig Anderson made 18 saves, and Mike Hoffman, Derick Brassard and Jean-Gabriel Pageau scored for the Senators (44-27-10).

“For us to come in today and just keep pressing … it’s a good feeling to know that you’re going into the playoffs playing good hockey,” Senators forward Mark Stone said. “We’re a little bit undermanned for those last couple of games and we were able to find a way. Looks like we’re going to get some guys back heading into the playoffs, so we’re pretty confident with the way we’re going. We’ve got home ice, so we’re happy to start here.”

Mika Zibanejad scored, and Henrik Lundqvist made 30 saves for the Rangers (47-28-6), who failed to tie their record of 28 road victories in a season. The Rangers are the first Eastern wild card and will play the Atlantic Division champion Montreal Canadiens in the first round.

Hoffman gave the Senators a 1-0 lead at 3:04 of the second period. Brassard made it 2-0 when he scored against his former team at 9:24. Pageau put the Senators ahead 3-0 at 6:19 of the third period when he tipped a shot by defenseman Mark Borowiecki.

Zibanejad made it 3-1 when he scored with 46 seconds remaining in the third period.

“I don’t know if I wanted this type of game, with the amount of scoring chances right in front,” Lundqvist said of his last regular-season start. “But I think that’s a good thing about this game. I saw a lot of high-quality scoring chances, but we got away from our game. It is what it is. The amount of turnovers we had in our end and all over the ice just really made it a tough day.”

After Lundqvist made a save on Pageau, Stone got to the rebound and circled the net. He passed the puck to Hoffman, whose shot went in over Lundqvist.

Alexandre Burrows passed the puck across the goal mouth to Brassard, but Lundqvist lunged to his right to stop the shot at 12:07 of the third period.

Brassard, who was acquired from the Rangers on July 18 in a trade that included Zibanejad going to New York, scored on a good pass from Viktor Stalberg, another former Rangers player. Brassard’s shot went in on the stick side.

The Senators had a 5-on-3 advantage for 29 seconds in the first period, but the Rangers didn’t allow a shot on goal.

“It always feels good to score, especially on Lundqvist. I gave him a hard time after the first period and then he robbed me there in the third period. I like our line right now with Burrows and Stalberg. We keep everything simple. If we can bring it in the playoffs, that will be great for the team.” — Senators forward Derick Brassard

If Toronto earns one point against the Columbus Blue Jackets on Sunday, it will play Ottawa. If not, Boston will play Ottawa. … Pageau’s goal and assist were the 99th and 100th points of his NHL career (250 games). He won 13 of 17 faceoffs (76.4 percent). … Goalie Antti Raanta will start the Rangers’ final regular-season game Sunday. … Senators defenseman Erik Karlsson, who missed his second game with a lower-body injury, said he will be ready for the playoffs. … New York finished 27-12-2 on the road.